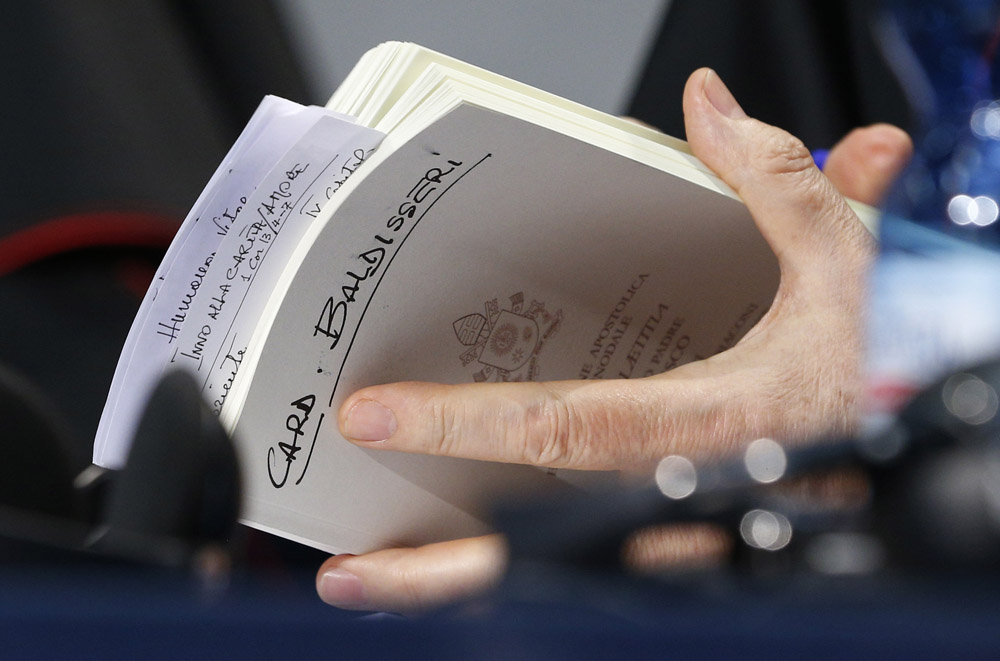 Cardinal Lorenzo Baldisseri, general secretary of the Synod of Bishops, holds his copy of Pope Francis' apostolic exhortation on the family, "Amoris Laetitia" ("The Joy of Love"), during a news conference for the release of the document at the Vatican April 8, 2016. (CNS/Paul Haring)

Standout moments in the debate following Amoris Laetitia's April 2016 release include the November 2016 publication of a letter from four cardinals openly challenging the pope over the document and the September 2017 accusation by a few dozen Catholics that the pontiff had even committed heresy in writing it.

But not much public focus has been centered on what the document, known in English as "The Joy of Love," actually says in its 261 pages. Even less attention has been given to how local dioceses might implement its program for bishops and priests to see God's grace at work even in the sometimes-unconventional situations families and marriages face today.

An upcoming event at Boston College hopes to address that lack of attention. In five panel discussions over two days Oct. 5-6, two cardinals, 12 bishops, and 24 other invited participants are set to discuss what organizers are calling the "new momentum" Amoris Laetitia gives local bishops to renew their pastoral practices toward families.

Jesuit Fr. James Keenan, a theologian at Boston College who is helping organize the event, told NCR the hope for the conference is to "fortify and further the ongoing reception of Amoris in the U.S."

Keenan organized the event alongside Chicago Cardinal Blase Cupich, using the model of an earlier conference hosted at Paris' Institut Catholique by French Cardinal André Vingt-Trois and Msgr. Philippe Bordeyne, a theologian and rector of that institute. 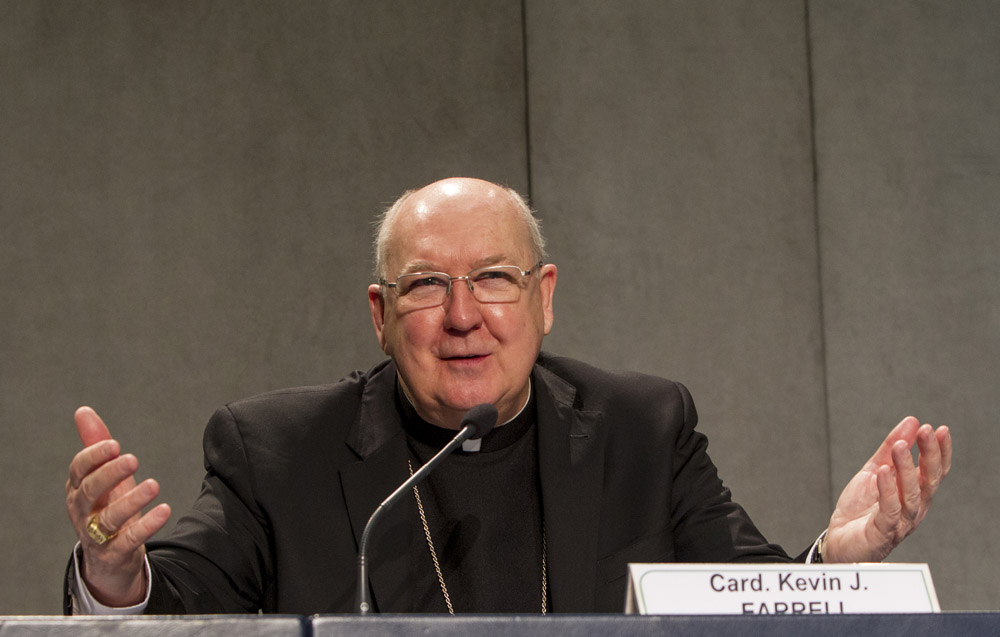 Cardinal Kevin Farrell, prefect of the Dicastery for the Laity, Family and Life, answers questions March 30 at a Vatican news conference on the 2018 World Meeting of Families, which will be held in Dublin. (CNS/Robert Duncan)

Cupich will attend the Boston-area event as will Cardinal Kevin Farrell, who was called to Rome from Dallas by Francis in 2016 to lead the Vatican's new Dicastery for Laity, Family and Life. Farrell will speak Oct. 5 as part of a panel on how the apostolic exhortation addresses those in Western cultures who have become disaffected by authority structures.

Keenan said the event will have a particular focus on hearing from those who have been involved with helping the European church better understand and implement Amoris Laetitia.

Speakers include German Bishop Franz-Josef Overbeck, who participated in the 2014 and 2015 Synods of Bishops that led to the exhortation; Malta Archbishop Charles Scicluna, who co-wrote a January 2017 document for Malta's priests on how to implement the exhortation in their country; and Jesuit Fr. Antonio Spadaro, a papal confidant and editor of the Italian magazine La Civiltà Cattolica.

In addition, Keenan said that while Boston Cardinal Sean O'Malley and Philadelphia Archbishop Charles Chaput are unable to attend, both are sending representatives to take part.

Among the expected 24 lay participants at the event are some of the most prominent theologians in the U.S., including: Cathleen Kaveny, Richard Gaillardetz, and Hosffman Ospino of Boston College; Julie Hanlon Rubio of St. Louis University; Franciscan Sr. Katarina Schuth of the University of St. Thomas, and Meghan Clark of St. John's University.

A handful of press outlets have been invited to report on the proceedings, including NCR. 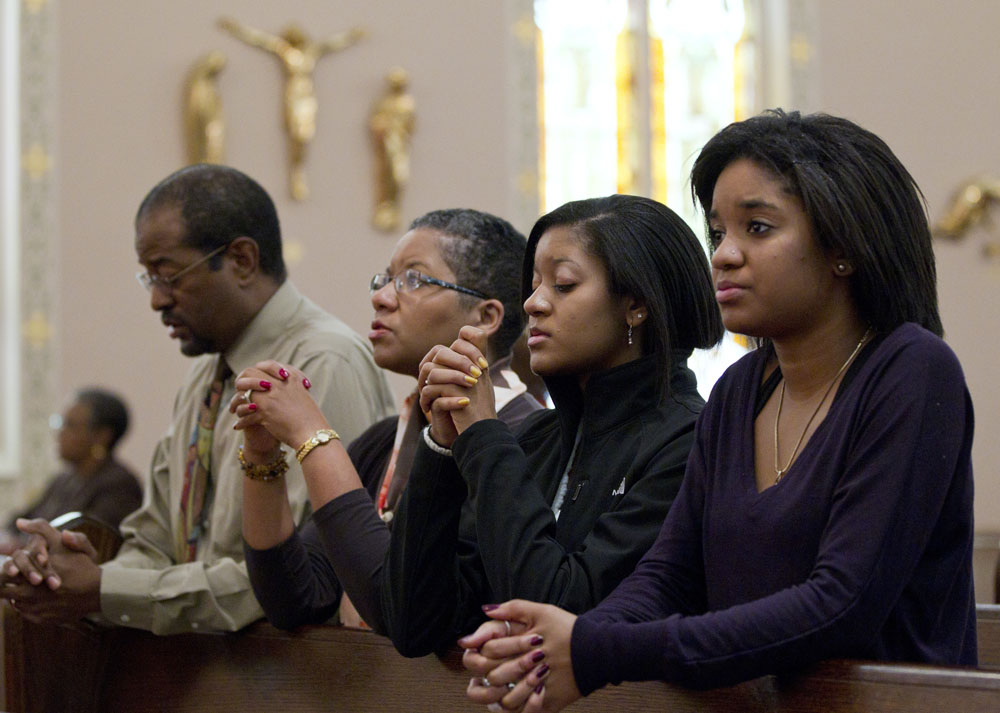 A family prays after arriving for Sunday Mass in 2011 at St. Joseph's Catholic Church in Alexandria, Viriginia. (CNS/Nancy Phelan Wiechec)

The Boston conference carries the title "Amoris Laetitia: A New Momentum for Moral Formation and Pastoral Practice." The program states that Francis is "inviting the Church to a renewed process of moral formation and pastoral practice with regard to marriage and family life that is rooted in Sacred Scripture and the Church's faith."

"Implicitly, [the pope] is also envisioning a wider perspective on renewal that has a broader application for the life of the whole Church," it continues. "The foundations are absolutely traditional ... but what brings the movement forward is a creative recovery of synodality, listening, accompaniment and discernment."

Farrell's panel on how the exhortation addresses those disaffected by authority is to be the third of the five panels of the conference. The first two are to focus on understanding "the scope, the challenge, and the promise" of the document, and the "newness that priests and laity face" in reading it.

The fourth and fifth panels will focus on how Amoris Laetitia engages in a pastoral process marked by discernment and accompaniment, and the challenges the document presents to theologians and pastors.

Amoris Laetitia was released on April 8, 2016. It was written by Francis following the 2014 and 2015 Synods of Bishops on the family, which each made recommendations to the pontiff after weeks of meetings among hundreds of prelates at the Vatican.

While the exhortation does not explicitly change church teaching, it has been seen as a radical departure from recent decades of pastoral practice. In one of Amoris' most poignant passages, Francis asked Catholic pastors around the world to let their lives become "wonderfully complicated" in an effort to see God's grace at work, even in situations which might be seen as contrary to doctrinal norms.

The pontiff also called on bishops and priests to set aside fears of risking moral confusion in their efforts to accompany people in difficult family situations, saying pastors must avoid a tendency to a "cold bureaucratic morality" and should shift away from evaluating peoples' moral status based on rigid canonical regulations.

Pointedly, Francis said that Catholic prelates could no longer make blanket moral determinations about so-called "irregular" situations such as divorce and remarriage.

"It ... can no longer simply be said that all those in any 'irregular' situation are living in a state of mortal sin and are deprived of sanctifying grace," the pontiff stated at one point in the document.

"It is reductive simply to consider whether or not an individual’s actions correspond to a general law or rule, because that is not enough to discern and ensure full fidelity to God in the concrete life of a human being," the pope wrote later.

"Discernment must help to find possible ways of responding to God and growing in the midst of limits," stated Francis. "By thinking that everything is black and white, we sometimes close off the way of grace and of growth, and discourage paths of sanctification which give glory to God." 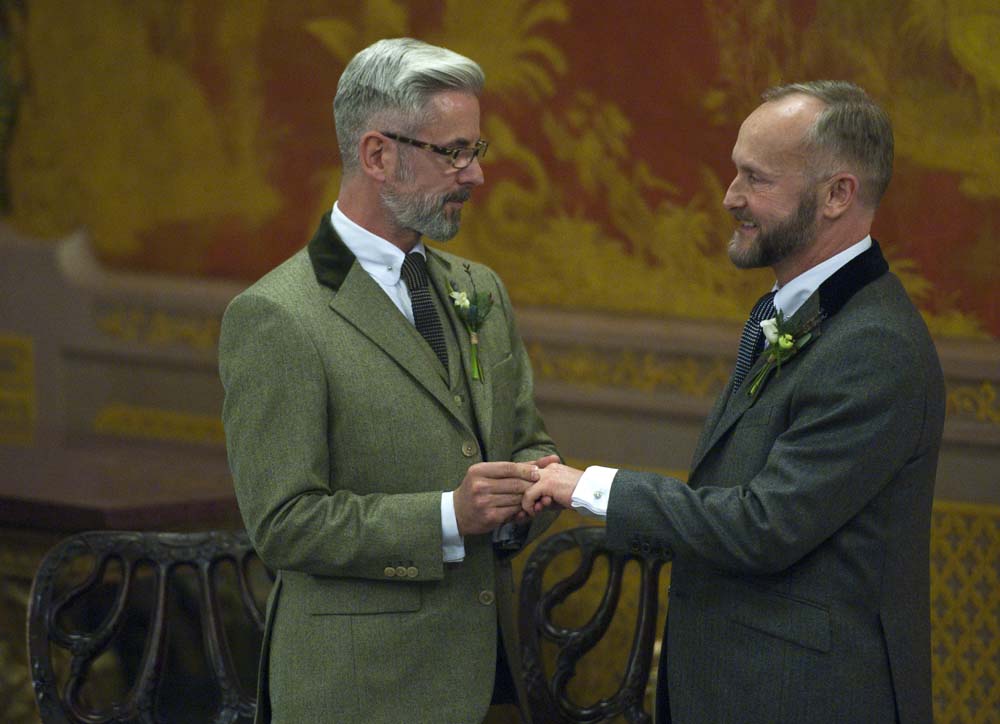 A same-sex couple exchange rings during their marriage ceremony in 2014 in Brighton, England. (CNS/Will Oliver, EPA)

The pope also said the church has sometimes had a hard time in the past respecting what lay Catholics discern God to be telling them in their consciences.

"We also find it hard to make room for the consciences of the faithful, who very often respond as best they can to the Gospel amid their limitations, and are capable of carrying out their own discernment in complex situations," he stated. "We have been called to form consciences, not to replace them."

Much of the public debate during the 2014 and 2015 synods had focused on how the bishops and the pope might address divorced people who had remarried without first seeking annulments. Church practice has in the past prevented such people from taking Communion.

Francis devoted the eighth of Amoris Laetitia's nine chapters to that question. While the pope did not specifically issue a new law or regulation allowing remarried Catholics writ large to have the Eucharist, he significantly changed the church's stance towards such persons.

The pope called for "pastoral discernment" of individual situations and proposed what he called "the logic of pastoral mercy" in working with remarried persons.

Citing Pope John Paul II, Francis put forward the notion of "graduality," meaning that Catholics may sometimes grow toward adherence or understanding of church teaching throughout their lives.

"This is not a 'gradualness of law' but rather a gradualness in the prudential exercise of free acts on the part of subjects who are not in a position to understand, appreciate, or fully carry out the objective demands of the law," stated the pope. "For the law is itself a gift of God which points out the way, a gift for everyone without exception."

"No one can be condemned forever, because that is not the logic of the Gospel!" he exhorted. 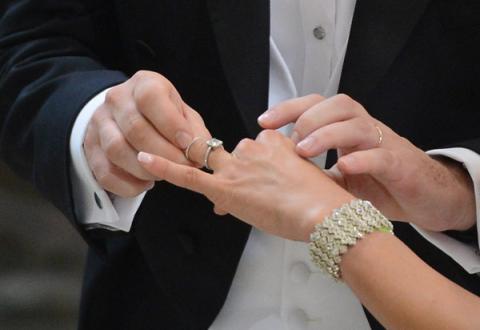 A couple gets married in Stockholm, Sweden, in this 2013 file photo. (CNS/Fredrik Sandberg via EPA)

Francis also said it is possible that those living in "an objective state of sin ... can be living in God’s grace, can love and can also grow in the life of grace and charity, while receiving the Church’s help to this end."

In a footnote at the end of that passage that some have taken to mean that divorced and remarried people can now take Communion in some circumstances, the pope said that in some cases such help from the church "can include the help of the sacraments."

"I understand those who prefer a more rigorous pastoral care which leaves no room for confusion," Francis stated later. "But I sincerely believe that Jesus wants a Church attentive to the goodness which the Holy Spirit sows in the midst of human weakness."

Much of the debate since Amoris Laetitia's release has revolved around how different people interpret the footnote about giving divorced and remarried people the help of the sacraments.

The Maltese bishops' guidelines said that a divorced and remarried person who has prayed at length and is acting with an informed conscience "cannot be precluded from participating in the sacraments of reconciliation and the Eucharist."

A group of Argentine bishops likewise said in September 2016 that there can sometimes be factors in a divorce that limit the responsibility of the Catholic in question and that, in those cases, "Amoris Laetitia opens the possibility of access to the sacraments of reconciliation and the Eucharist."

But other bishops have said Amoris Laetitia does not open up the possibility for divorced people in new marriages to receive Communion. In July 2016, for example, Chaput issued guidelines stating that remarried people would need to refrain from sexual intimacy if they wanted to take the Eucharist.

"Undertaking to live as brother and sister is necessary for the divorced and civilly remarried to receive reconciliation in the sacrament of penance, which could then open the way to the Eucharist," said those guidelines.

While Francis has refrained from clarifying exactly what possibilities Amoris Laetitia opens for remarried people, he praised the Argentine bishops' guidelines in a letter later confirmed as authentic by the Vatican.

The letter stated that the Argentine prelates had accurately explained with the exhortation taught. "There are no other interpretations," Francis said.