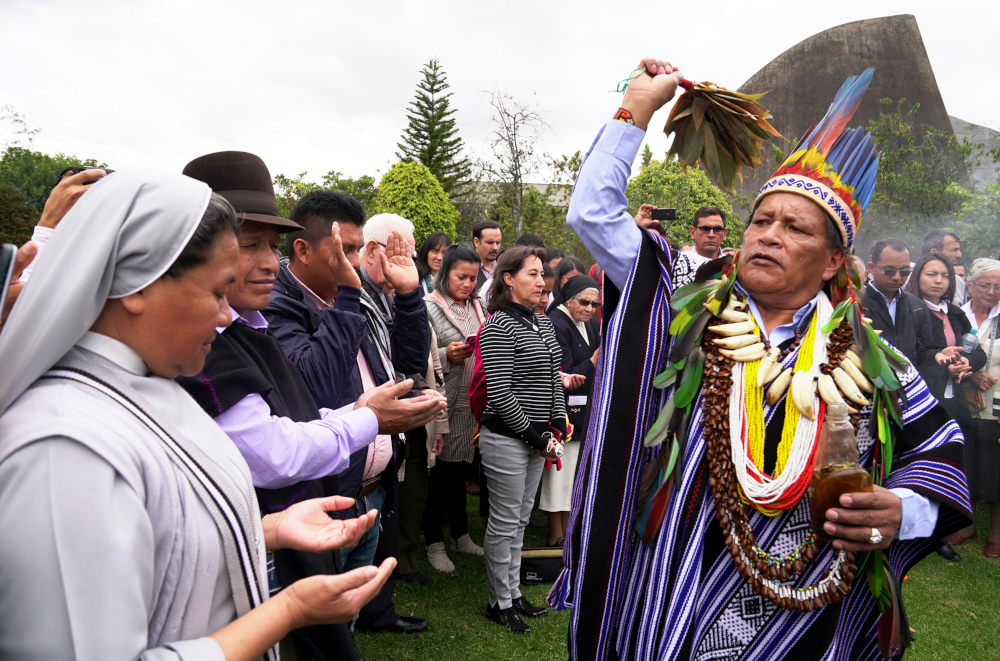 Isidoro Jajoy, a shaman from Colombia's Inga tribe, blesses people in Bogota Aug. 14, 2019, during a preparatory meeting for the October Synod of Bishops for the Amazon. (CNS/Manuel Rueda)

Bishops, nuns, priests and residents of the Amazon basin met in Colombia's capital city in mid-August to prepare for a special Synod of Bishops for the Amazon this fall at the Vatican.

The meeting gave bishops who will be attending the synod a chance to develop proposals and listen to residents of the Amazon region, before they head to the Vatican in October for the gathering. Similar pre-synod meetings have been held recently in Peru and Brazil.

Pope Francis "wants to give visibility to the people of the Amazon and listen to their concerns, their teachings, their spirituality," said Bishop Joaquin Pinzon Guiza of Puerto Leguizamo-Solano, a vicariate deep in the world's largest rainforest. "As bishops we don't just want to take our thoughts to the synod, but also what lies within our peoples' hearts."

The synod, announced by Francis in October 2017, will focus on how to improve the church's work in the vast but sparsely populated Amazon biome, which sprawls across nine South American countries and is largely inhabited by indigenous groups.

Approximately 110 bishops that lead church jurisdictions in the Amazon will attend as well as representatives of continental episcopal conferences and 32 observers, including indigenous leaders.

One of the topics that will be discussed is the ordination of married men as priests in far-flung villages where Catholics are currently struggling to get sacraments, and even celebrate Sunday Mass, due to the scarcity of qualified church personnel.

Some church leaders have criticized the idea of ordaining married men, saying it presents a "breach" with apostolic tradition. But many at the Colombia session seemed to favor the move.

In an early August interview in the Italian newspaper La Stampa, Francis was asked whether the possibility of ordaining older, married men to minister in remote areas would be one of the main topics of discussion at the synod. The pope replied, "Absolutely not. It is simply one number" in the working document, a discussion guide that contains 146 items, outlining various topics.

Cardinal Pedro Barreto Jimeno of Huancayo, Peru, told participants in the Colombia meeting: "The Eucharist is at the center of our faith, and Popes John Paul II and Benedict XVI both said that, without it, you cannot build the church. ... We need to reflect on how to help our brothers in these poor and abandoned communities to be full members of the Catholic Church."

Barreto, vice president of the Pan-Amazonian Church Network, or REPAM, added that the synod "does not work as a congress" and explained that, ultimately, it is up to Francis to decide if married men with a record of community service and good standing in their villages can be ordained.

He said the synod also will look at ways in which the Catholic Church can address social problems facing the Amazon region, like deforestation, destructive mining practices and threats against indigenous leaders.

"Our current economic system seeks profit, but forgets about caring" for the environment, Barreto said. "It is a system that is killing people ... and indigenous people are especially vulnerable."

The presynod meeting was attended by dozens of indigenous leaders, government workers and members of civil society groups, who chimed in with their own ideas on how the church can help with environmental preservation.

Colombian President Ivan Duque, who attended the meeting's inaugural session, called on bishops to address drug trafficking and its impact on Amazonian communities. Duque said large tracts of the rainforest have been cleared by drug traffickers to plant coca leaves, the raw material for cocaine.

Cesar Melendez, director of CDA*, a Colombian environmental agency, said bishops and priests can help by including environmental messages in sermons and in Catholic education.

"As a government agency, we can affect behavior change through sanctions and campaigns" Melendez said. "But the church has the ability to reach communities in a different way, by touching upon their spiritual side. I think people respect what is said at church."

Some members of the Catholic hierarchy have criticized the upcoming synod for trying to get involved in areas that have been traditionally beyond the church's reach.

German Cardinal Walter Brandmuller recently published an essay in which he accused the synod's working document of being heretical because it refers to the rainforest as a place of divine revelation. In the essay, published in June, Brandmuller also criticized the synod for its plans to get involved in social and environmental affairs.

In Colombia, in contrast, indigenous groups have largely welcomed the synod process.

"The fact that the pope has included indigenous people in his agenda is already a victory for us," said Fanny Cuiro, an indigenous leader from Colombia's Huitoto tribe, who attended the presynod meeting.

"The heads of state in many of our countries often don't have time for indigenous people, so having the pope's attention fills us with hope."

But Cuiro said the missionaries frowned upon indigenous customs and beat children when they spoke their native language at school. She said that over the past three decades, the situation has improved, and members of the church have become much more supportive of indigenous ways.

"At first we had a difficult relationship with the church," she said. "But now the priests and nuns are friends. We trust them and we can speak with them about our plans for the future."

*This job title description in this sentence has been updated.