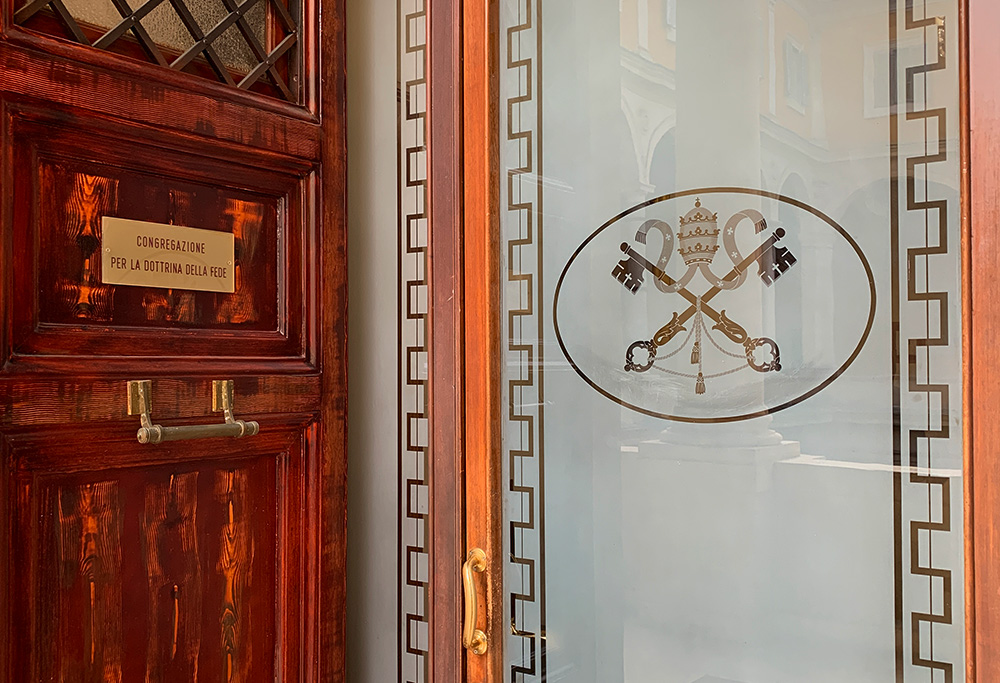 The door into the Congregation for the Doctrine of the Faith inside the Vatican's Palace of the Holy Office (NCR photo/Joshua J. McElwee)

Several prominent theologians are raising concerns about how the Vatican's doctrinal office has handled the case of Redemptorist Fr. Tony Flannery, saying the decision to issue fidelity oaths to the priest over his support for women's ordination appears out of line with Pope Francis' calls for a Catholic Church open to dialogue.

In interviews with NCR, the academics also wondered if Flannery's treatment might signal that the powerful Congregation for the Doctrine of the Faith is returning to its practice of tightly controlling the bounds of theological debate, which in previous decades led to the silencing of theologians and priests around the world.

Bradford Hinze, a theologian at Fordham University known for his work exploring issues of authority and obedience in the church, said Flannery's case "has the feel of being a bit of a time warp."

The issuing of four fidelity oaths to the Irish priest "gives the appearance of being a performative contradiction with the official and informal statements and practices of Pope Francis that encourage dialogue and openness in the church," said Hinze.

Richard Gaillardetz, a theologian at Boston College who has also focused on issues of authority in the church, said the doctrinal congregation appeared to be operating "within a kind of law enforcement paradigm."

While Gaillardetz said the Vatican has a role to play in setting the bounds for theological debate, he added: "This law enforcement paradigm and the punitive measures that invariably follow from such a framework are archaic and pastorally counterproductive."

Flannery, a popular Irish writer, retreat giver and, formerly, pastor, was removed from public ministry in 2012 after the Vatican congregation expressed concern over a number of columns he had written for Reality, a Redemptorist-run magazine in Ireland.

Flannery's case had essentially been on hold for eight years, until Redemptorist leadership in Rome queried the congregation in February over whether they could return the priest to ministry.

The Vatican's response, revealed by Flannery to NCR on Sept. 15, was to ask the priest to sign four "doctrinal dispositions." The dispositions regard the church's official positions on a male-only priesthood, gay relationships, civil unions and gender identity.

The letter accompanying the dispositions informed the Redemptorist leadership that Flannery "should not return to public ministry" if the priest did not sign the four attached oaths.

Hinze, author of the 2016 volume Prophetic Obedience: Ecclesiology for a Dialogical Church, called the issuing of such threats "an ominous sign" for Francis' continuing papacy.

"I assumed that the pontificate of Francis brought about a paradigm shift promoting open and honest inquiry and speech, bringing to an end the policing of theologians on [such] matters," he said.

"If there are challenging issues that need to be discussed in the church, let's have these theological discussions in public without putting someone on trial or punishing them for searching honestly for truthful living in reality in keeping with the Gospel," said Hinze.

The head of the doctrinal congregation is Spanish Cardinal Luis Ladaria, whom Francis appointed to that role in 2017 to replace German Cardinal Gerhard Müller.

Responding to a question from NCR about Flannery's case during a Vatican briefing Sept. 22, Ladaria said the move to issue fidelity oaths, while "very unpleasant," was part of his congregation's duty as the global church's orthodoxy watchdog.

Ladaria also said his office had done "everything possible" to dialogue with Flannery.

That claim drew sharp rebuke from the priest, who told NCR it left him "almost speechless." Flannery said that during the eight years of his suspension, he had never received a direct communication from the congregation.

In cases involving persons who are members of religious communities, the congregation typically only corresponds with the person's religious superior. 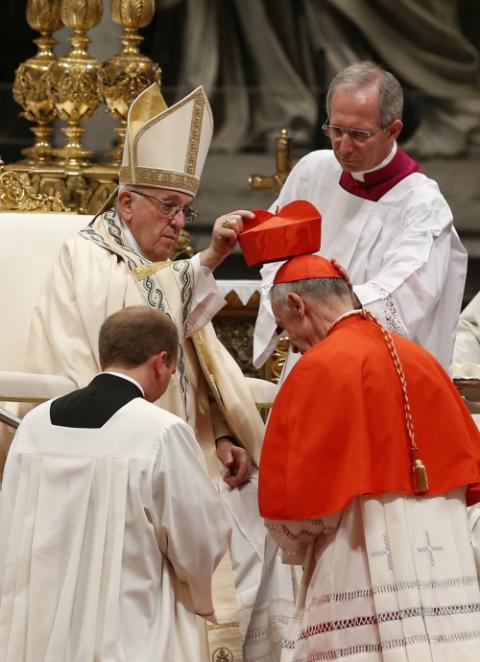 New Cardinal Luis Ladaria, prefect of the Congregation for the Doctrine of the Faith, receives his red biretta from Pope Francis during a consistory to create 14 new cardinals in St. Peter's Basilica at the Vatican June 28, 2018. (CNS/Paul Haring)

Gaillardetz, author of the 2003 volume By What Authority?: Foundations for Understanding Authority in the Church, revised in 2018, called that practice of communicating only with the superior "problematic."

Although Gaillardetz said a member of a religious community under Vatican scrutiny might well want support from other members of their community, he added: "The fact that they refuse to communicate directly with Fr. Flannery is quite problematic and suggests a continued breach in basic principles of due process."

Catherine Clifford, a theologian at St. Paul University in Ottawa, said that many in her field have raised questions for years about the procedures the doctrinal congregation follows in investigating theologians.

Clifford, who is also the author of the 2014 volume Decoding Vatican II: Interpretation and Ongoing Reception, noted that the investigations are often conducted in secret and can be touched off by anonymous complaints by persons whose motives are unclear.

"This can lead to unfair accusations and unfounded interpretations of the works in question, resulting in a painful experience of isolation for those under investigation and no little harm to their reputation when accusations of unorthodoxy are made public," said Clifford.

The Vatican congregation became particularly known for cracking down on the work of theologians during the papacy of John Paul II, when it was led for 24 years by German Cardinal Joseph Ratzinger, the future Pope Benedict XVI.

During Ratzinger's tenure, the congregation contacted many global theologians to make inquiries about the legitimacy of their work. Although there were many cases that attracted global attention — such as those of Sri Lankan Oblate Fr. Tissa Balasuriya, Belgian Jesuit Fr. Jacques Dupuis and U.S. Jesuit Fr. Roger Haight — it remains unknown just how many such cases existed.

The congregation typically tells theologians or priests under investigation that they must keep the process confidential, or risk incurring further penalties.

"The larger question this raises is how many other such investigations are underway now (or have been since Francis became pope) in which no genuine dialogue is taking place, especially not in public," he said.

A version of this story appeared in the Oct 16-29, 2020 print issue under the headline: Fidelity oaths spark fear of return to theological silencing.