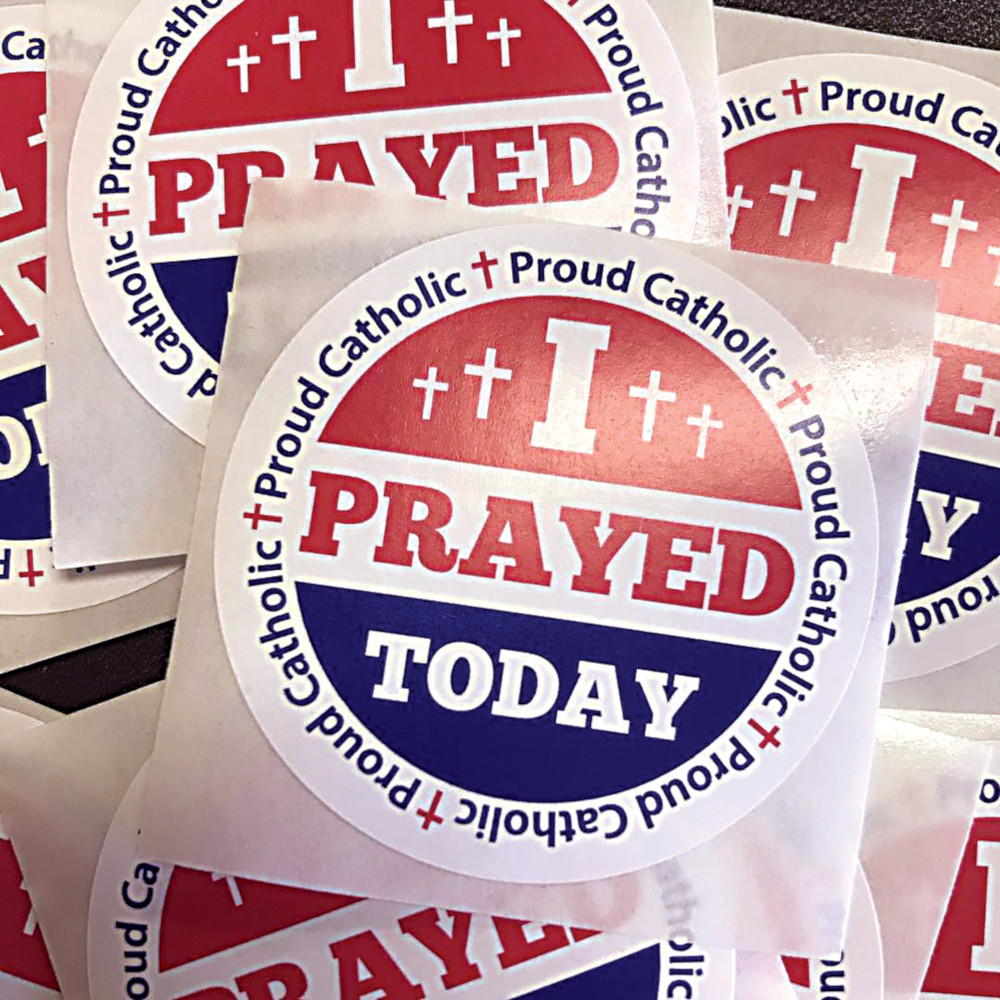 An Election Day mistake opened the door wide for some real evangelization.

It began as some voting locations Nov. 6 ran out of "I Voted" stickers, which are traditionally provided by the Louisiana Secretary of State's office to people at the polls. The governmental faux pas created a deluge of complaints on social media, with voters asking why they were unable to get a sticker.

At one point, Father Michael Alello, pastor of St. Thomas More Church in Baton Rouge, posted on his social media account, "Don't worry, you will get an 'I Prayed Today' sticker today when you come to Mass."

Even the personable Father Alello, who admitted his post was a "sarcastic joke," could not predict the impact his invitation would have not only in the Baton Rouge but also across the country. Soon after reading the post Todd Husers, who first met Father Alello when the young priest was serving as parochial vicar at St. John the Evangelist Church in Prairieville, Louisiana, called his friend and asked, "How many stickers do you want?"

"He told me I was crazy, which I probably am," Husers, who remains a St. John parishioner, told the Catholic Commentator, newspaper of the Baton Rouge Diocese.

"I had no intention of making stickers," said Father Alello, who maintains an active social media presence and utilizes the medium in his ministries. "It was simply a sarcastic joke to play on what was going on in the community at the time."

Father Alello said stickers were a fun, quirky way to carry out the church's mission of the new evangelization. He told his parishioners to wear their stickers with pride, and "when you are asked where you got your sticker from, you can tell them your crazy pastor handed them out since you didn't get one for voting."

Husers said he and a friend designed the stickers, which are similar to the "I Voted" stickers but crosses replace the stars and includes the words "I Prayed Today."

"It was a fun project; our faith should be awesome and fun," Husers said. "I think we should have fun with our faith and be proud of it. Sometimes the misconception is we are just solemn and not having a lot of fun. But we do have fun."

Even weeks after the stickers were distributed, Father Alello remains amazed at the project's popularity. He has heard from churches in Texas and Michigan asking how they can have similar stickers produced.

"It's been fun, a fun way to engage the community, a fun way to be a proud Catholic in our community," Father Alello said. "The people loved it and thought it was a great idea. It's another way for the church to be present today.

"I think sometimes we take ourselves way too seriously," he added. "I think it was a great opportunity for us to be church and community together, just to laugh about something that happened in our community and also have an opportunity to be truly proud of who we are."