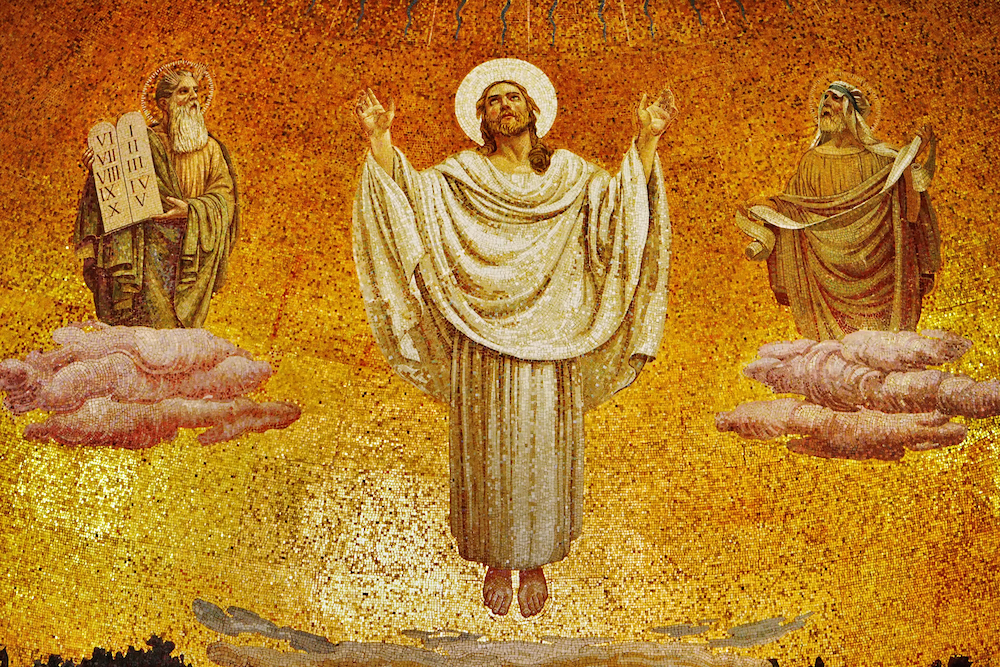 A mosaic is seen in 2006 of the Church of the Transfiguration in the Israeli region of Galilee. (CNS/Greg Tarczynski)

The first lesson today about the covenant between God and the people who will become the descendents of Abraham and Sarah can remind us of our covenant with God which we spoke about last week as we began this season of Lent. Our covenant with God entails the gift of God's life to us. We share the risen life of Jesus. He becomes our God and we become God's people through the covenant of baptism.

This season of Lent, as we reflected last week, is a time when we prepare to renew that covenant, and we try to enter into more fully and completely the life of Jesus by following his way, living according to his example and his teaching. In the Gospel lesson today, it helps us to understand what we need to do during this season of Lent as we undergo a profound conversion to renew that risen life within us and to follow more deeply the way of Jesus.

I think we best understand the Gospel if we remember that just a short time before in this Gospel of Luke, an incident had happened where Jesus had asked the disciples and the people around him, "Who do the people say the Son of Man is? (talking about himself) Who do they say I am?" Of course you remember, some said, "You could be Elijah or one of the other prophets — John the Baptist come back to life." But then Peter spoke up and said, "No, you are the Christ, the Messiah." Jesus said to Peter, "Blessed are you, Simon, because flesh and blood have not revealed this to you, but God."

Now that revelation that Peter came to realize is extended even further. Peter, together with James and John, goes up on this mountain to be in solitude and prayer with Jesus. They experience what we just heard in the gospel, seeing Jesus transformed, transfigured, his garments becoming dazzlingly white. Peter, James and John fall down in silence before Jesus. Then they see Moses and Elijah speaking with Jesus. But then as we heard, the cloud comes down and covers everything and they hear God speaking, going beyond what Peter had said before, God saying not just that Jesus is the Messiah, but Jesus is my Chosen One, my Beloved, my Son.

To these three Jesus is revealed as not just Messiah, not one like us in every way except sin alone, but rather as Son of God. Then God gives the commands that we really must heed today, "Listen to him so that you change your life according to what Jesus teaches." That's how we'll enter into a renewed fullness of life at Easter, by listening to Jesus. The fact that the two people who were there with Jesus were Moses and Elijah gives us a direction of what we are to look for as we listen to Jesus. Moses — he was the one who brought the law from the heaven, from his vision of heaven, written on those stone tablets, as we all remember.

But now Jesus goes beyond Moses in bringing us along. It's in the Gospel. Jesus saying to the people, for example, "You have heard that it was said of old (in the law), 'Do not kill.' But I say to you do not even be angry with your brother or sister" — going way beyond the commandment do not kill; do not even be angry. Jesus makes it very concrete by saying, "Even if you're bringing your gifts to the altar (you're coming to worship God), and there you remember that your brother or sister has something against you, leave your gift, go first and be reconciled. Only then come back and offer your gift."

Jesus is making it clear that reconciliation, forgiveness, love — these must become the way of our life. He tells us, "You have heard that it was said of old, 'Love your neighbor, hate your enemy.' I say to you love your enemy (the one who has hurt you, hated you, injured you). Love your enemy. Do good to those who hurt you." Jesus is taking the law of old, going far beyond it to show us a new way, his way, God's way. When we think about Elijah, Jesus fulfills the prophets too, like Elijah. He stands for all of the prophets of the Old Testament. But Jesus now is the prophet.

Earlier in Luke's Gospel in Chapter 4, in the first sermon Jesus preached, he declared in that synagogue in Nazareth, "The Spirit of God is upon me. God sends me forth to proclaim good news." A prophet speaks God's Word and Jesus proclaims, "God sends me to be prophet, proclaim the good news, God's love, to heal the brokenhearted, to raise up the afflicted, to bring forth justice." Jesus says when he concludes that part of his sermon, "This day this passage is fulfilled as you listen." So Jesus is the prophet going beyond all of the prophets of the Old Testament. Jesus becomes the one who speaks for us the Word of God; and God says, "Listen to him."

This is what we must try to do now during this season of Lent — listen deeply, intently to the Word of God. Isn't it true we need this message more than ever because there is so much violence, such a spirit of hatred in our world. It happened again on Friday, a person with a gun going into a place where prayer is being said, a mosque. According to the newspaper report yesterday, it was a place of devastation:

The wounded tried to craw away or lie still, while others ran or crouched behind the dead, but the gunman kept pulling the trigger. He shot fleeing women and girls, and pumped bullet after bullet into piles of motionless men and boys in a house of worship [an extreme act of hatred and blasphemy].

The man accused of carrying out the worst mass murder in New Zealand's modern history, one that left 49 [and now we know 50] people dead and more than 40 others wounded at two mosques …

The horror was designed specifically for an era that has married social media and racism — a massacre apparently motivated by white extremist hatred, streamed live [this is a new thing] on Facebook and calculated to go viral [in the social media].

The shooting represented a staggering corruption of a form of communication, used innocently by millions, that promised to draw people together but has also helped pry them apart into warring camps. It also shattered a veneer of civility and security in one of the safest and most highly developed countries in the world.

It's an atrocity that's almost beyond comprehension, but that's what's happening in our world because hatred is so rampant. Listen to Jesus; it's the only answer. We must learn how to return love for hate, goodness for evil, nonviolence for violence—the way of Jesus. It has to start in our homes, in our communities, in our own country, and it has to spread. We who are the followers of Jesus must truly listen to him speaking to us as our brother, but also as the Son of God, the God of all wisdom and love.

His is the only way that we will be able to overcome the horrors that seem to happen time and time again in our world. I hope as we listen to the scriptures today and we remember that we're trying to prepare to renew our covenant with God through our baptism, that we listen deeply and continue to listen during this season of Lent so that we will truly follow the way of Jesus, the way of love that can overcome all the hatred and evil in our world and transform our world into the reign of God, a reign of love.

Editor's note: This homily was given March 17 at St. Ambrose Church in Grosse Pointe, Michigan. The transcripts of Bishop Thomas Gumbleton's homilies are posted weekly to NCRonline.org. Sign up here to receive an email alert when the latest homily is posted.