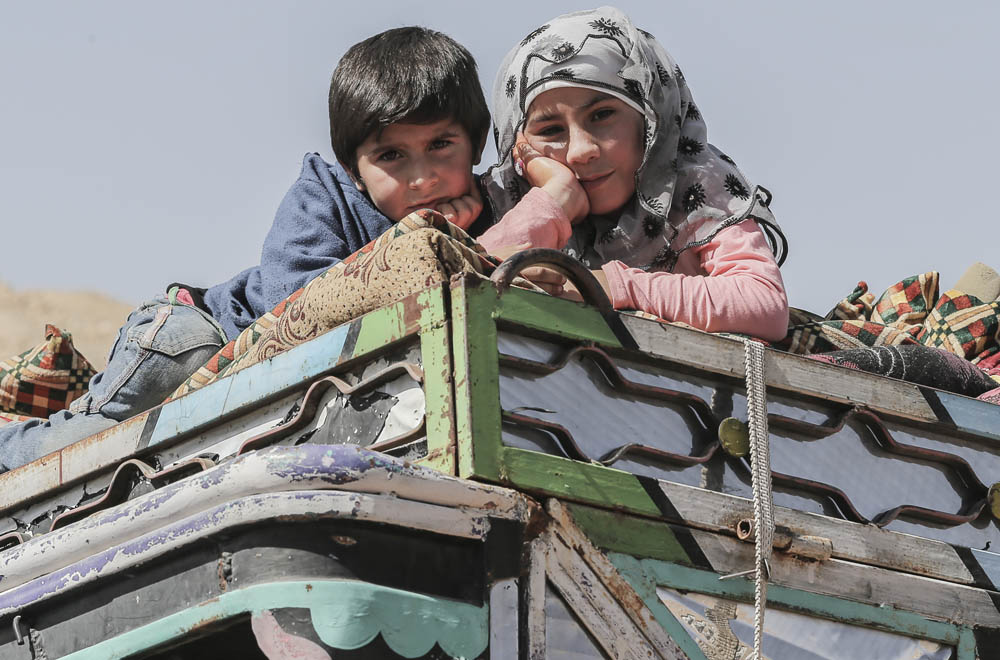 Young Syrian refugees are seen atop a vehicle at a camp in June in the village of Arsal, Lebanon. (CNS/Nabil Mounzer, EPA)

As I reflected on this gospel lesson today (and I think you would find the same thing), I have a sense that Jesus is getting quite discouraged with his disciples. It's over two years now that he's been with them. For the second time he tells them that his way is the way of suffering and death and through that death comes new life. They don't understand. Instead of asking him to clarify, they just go on and take up their own concerns.

Of course as we hear in the Gospel, their concerns are far from those of Jesus. They argue among themselves, "Who's the greatest? Who's the most important? Who deserves the highest place in our group?" The last thing that Jesus wants them to be talking about is who is greater than this one or that one; who's the greatest of all. He's trying to teach them to be more like himself. He doesn't push himself ahead as the greatest.

It's easy to understand how Jesus would be frustrated because he had been teaching them for so long. But as we think about that, perhaps the first thing we should do is ask ourselves how much do we really accept and then live by what Jesus asks of us? Do we really pay attention week after week after week as he guides us to try to make sure we are changing our lives to bring them in accord with what he teaches? I think many of us would have to admit that we try somewhat, but we don't go very far in bringing about the deep change that Jesus is hoping to see in us, the conversion.

The example that Jesus uses in the lesson today, perhaps we need — especially in this area — to look into our lives and see how much we understand Jesus and how much we are following him. Because instead of arguing about who is the greatest, Jesus turns that upside down in a way and says, "In my understanding of things (that is, God's understanding of things), if you want to be great, become the servant." The word that Jesus used really means slave. Be the one willing to reach out and serve others. Change others' lives for the better.

The example that Jesus uses is one that, if we understand it fully, is truly challenging. Jesus takes a child. Now we might think by doing that he's taking an innocent child, very lovable and saying, "There's your example. Try to be lovable and innocent like a child." But it's deeper and more important than that. At the time of Jesus, in the culture in which he lived, a child was the most vulnerable of all people. Children had no rights whatsoever. They were totally vulnerable, even could be killed without any crime being committed. Abandoning them was not a crime.

Children were absolutely, totally dependent. Jesus takes that child, embraces the child, and says, "Whoever wants to be great in the reign of God must be the one who serves the most vulnerable among us." Perhaps at some point you've heard the phrase the "preferential option for the poor" as part of Catholic social teaching, that God has a special preferential option for the poor. That's what this indicates. The most vulnerable are the ones that are closest to God. If we want to serve God we have to serve the most vulnerable.

In our society, of course, it's not children who have no rights, but it's many, many people who are deprived of their rights in other countries, but even in our country. There are the desperately poor who need our help, and whom Jesus really is reflected. How often do we think of this as the most important way to serve God and to serve Jesus, to reach out to those who are poor and vulnerable? People fleeing violence, economic oppression, and people trying to come into our country — do we welcome them or do we build walls and force them away?

Even in our everyday life, are we quick to look at the poor and vulnerable and see Jesus in them, see God in them? Are we willing to change so that we expand our understanding of our community, so it's not just those we know and cherish, but we reach out to all and try to draw everyone in, and do that not just in our individual everyday lives, but also through the public policies that we develop? Jesus was discouraged with his disciples because they seemed not able to understand what he was telling them: "If you want to be my disciple, deny your very self and follow me."

Jesus reached out to the poorest, the most vulnerable, those who were persecuted, and those who were deprived of their rights. He always wants us to do the same. So as we think about the disciples today and how Jesus probably was discouraged because they seemed to find it so difficult to understand what he was saying, it would be good to look into our own hearts and see if we understand and want to understand what he's saying and are willing to change our lives so we follow him.

[Homily given Sept. 23 at St. Philomena Parish, Detroit, Michigan. The transcripts of Bishop Thomas Gumbleton's homilies are posted weekly to NCRonline.org. Sign up here to receive an email alert when the latest homily is posted.]