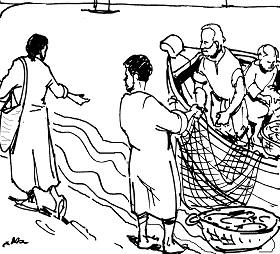 The role of the church in society is described by the Gospel and the example of Jesus. He is linked in Matthew’s Gospel with the brilliant light that brings new sight and joy to people living in darkness and gloom (Isaiah 9:2). Jesus called disciples who would help him gather others together around the revelation that God was in the world to make of us a beloved community.

The first disciples were fishermen, called from their boats and nets to be fishers of people. In his relationship with them, Jesus demonstrated their role by astonishing them with a miraculous catch of fish after a night of empty labor. As he had first caught them with his look of love, Jesus told them they would catch others in the same way.  By the end of their training, after Jesus’ death and resurrection, they got a final lesson on the shores of the Sea of Tiberias, where they hauled in 153 large fish, a number symbolically representing every known species, representing the whole world (John 21:11).

We see this gathering and reconciling role in the first communities assembled by the Apostle Paul. One of his most challenging mission churches was in the Greek city of Corinth, a bustling port that attracted people of every race, religion and origin. His preaching attracted Jews and gentiles, slaves and freemen, men and women, rich and poor.

We have some of Paul’s most important teachings about Jesus because so many controversies and divisions arose in Corinth. Some Jewish converts thought gentile converts should be circumcised and required to keep the Law. Rich people were eating separately from the poor at Eucharist. Male church members thought it inappropriate for women to speak. Charismatics were talking too much -- in tongues -- and some members said they were free of ordinary moral restrictions, while others stopped working because they thought the world was about to end.

We imagine a small, barely formed church already coming apart at the seams with rivalries and theological quarrels.  Paul writes to remind them that all their differences were less than the power of Jesus’ death, which reconciled us all by God’s overriding grace and mercy. He appeals to them: “Christ did not send me to baptize but to preach the gospel, and not with the wisdom of human eloquence, so that the cross of Christ might not be emptied of its meaning” (1 Cor 1:17).

The path to reconciliation leads to higher ground and common ground where greater principles overcome lesser divisions. But getting there means the hard work of dialogue, empathy, even sitting down with our opponents and critics. One name for the Mass is the “Feast of Enemies,” the one table where all our differences are less than the common experience of God’s unconditional love expressed in the sacrifice of Jesus, who laid down his life for all of us.

The disciples Jesus gathered around himself did not achieve unity quickly or automatically, but only by accompanying him during his ministry, where they learned how to negotiate with one another, growing from competitors to partners, strangers to brother and sisters. Through the crucible of failure and grief at his crucifixion, they emerged as witnesses to the power of reconciliation. The great surge of evangelization occurred when the world witnessed a young church and said, “See how they love one another.”

The test of the church today is here. Will believers be seen as bridge builders and reconcilers? Will we bring more light than heat to the conflicts that are inevitable as groups engage one another in everyday encounters in coffee shops and community forums? Will our pulpits be beacons of clarity and calm and as sources of authentic Catholic Social Justice Teaching on human rights and dignity?  Will the Eucharist be the center that holds even when tensions are high?

The net cast by the first Apostles chosen by Jesus is the web of welcome and love we are asked to extend to one another.  Unity in diversity is the sure sign that God’s grace is visible and flowing through us when the world needs to see it the most.