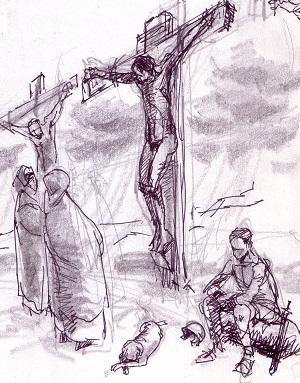 The Solemnity of Christ the King

It is the duty of a king to save himself. As symbolic head, his loss would decapitate the kingdom and demoralize its subjects. This is why many royal castles had a “keep,” an inner fortress where the king could hold out to the last in case of an attack. In 1527, Pope Clement VII is said to have sacrificed 147 loyal Swiss Guards to buy himself time to escape into the fortress of Sant'Angelo when French and German armies invaded Rome.

This is the way it is supposed to work. The higher up you are, the more you are expected to save yourself. Presidents are surrounded by security ready to give their lives to protect them.  Generals remain safe behind the lines because they must direct the army in the field of battle.

The Solemnity of "Christ the King" deliberately reverses, even parodies, these images of kingship. Jesus descends among the poorest of the poor, becoming a prisoner and convicted criminal on his way to execution. After being beaten and tortured during interrogation, he is abused by the soldiers for having regal pretensions — a crown of thorns is pressed into his scalp, a rough horse blanket is thrown across his raw shoulders, a staff is used to strike him, spittle anoints him.

Crucifixion was meant to humiliate its victims, straddled on crosses along the public road entering the city, broken men crying out in their death throes. The sign hung above Jesus’ head mocks him and the nation. Pilate declares, in effect, “Here is your king. Know that imperial Rome will tolerate no rival.”

What kind of king does not save himself? Not a worldly king apparently, but instead one so powerful that he accomplishes his purpose by offering himself as a victim to expiate the sins of others, including his enemies and executioners.

One of the two criminals hanging next to Jesus seems to grasp something of this power Jesus has over the whole sordid scene of his own death. Jesus is in charge, not the soldiers nor Pilate nor the jeering crowd. He is defining his self-sacrifice as an ultimate act of obedience to God, whom he calls his “Father.” He is offering himself out of love for his followers and all of humanity.

There is no power on earth quite like this authority radiating from Jesus on the cross. One of the men crucified with him “sees” with the profound insight we call faith that Jesus. who is not saving himself, has the power to save him. Because of a grace offered to him in the final hour of his life, this condemned man will be the first person to enter Paradise by the power of Jesus’ redemptive death.

We take from this amazing story a different understanding of real power and freedom. Our call is to climb down, not up, to seek places of service and solidarity with the poor and the weak of this world. Blessed are those who grasp this paradox, for today they will be with Jesus in Paradise.