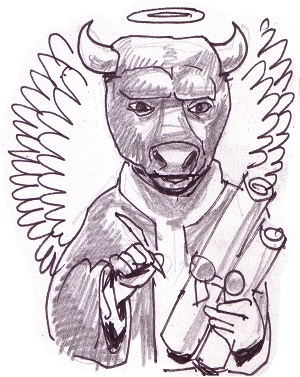 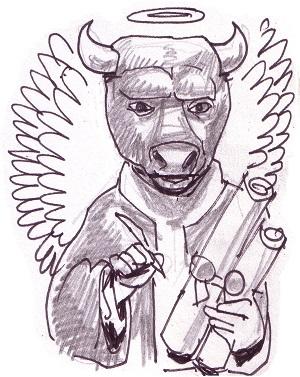 In the conventional list of the most inspiring and influential writers of all time, we are not likely to hear the name of St. Luke, but surely his Gospel stands as one of the most important documents ever written.

Luke's two-part history about Jesus and the growth of the early church (Acts) tells the story of God's plan to reclaim the world from sin and death by the mystery of the life, death and resurrection of Jesus. Luke's theology reflects the influence of St. Paul, who grasped and articulated the underlying Paschal Mystery of Jesus' passage through the cross to a New Creation in God.

This Gospel was a daring counter proclamation to the official Roman propaganda of the divine Caesar, son of God, who saves the world and brings peace through conquest. Luke and Paul, like the early church itself as it expanded into the empire, were "lambs among wolves" for challenging the state religion. We do not know the fate of Luke, but Paul's presumed martyrdom at Rome showed how serious a threat Christianity was perceived by the empire.

If in today's headlines a single journalist can be brutally murdered for criticizing a despot, imagine the resistance an empire could bring down on a tiny movement that questioned its power as ruler of the known world. Depending on your point of view, all the early Christians were dangerous subversives, their religion an illegal cult made up of converted Jews, former slaves and social outcasts who threatened Rome's economic stability and social order.

The risks the early preachers took to spread the Gospel are alluded to in Luke's account of the sending out of the 72 disciples. They went not knowing whether they would be received or rejected. They traveled without resources, vulnerable and totally dependent on strangers. They might be reported and detained, just as Paul was on his travels through Galatia. Merchants and priests might object to their bold message of liberation from superstition and idols, or their claims about healing, as cutting into their livelihood and control of local populations.

We celebrate St. Luke the Evangelist by remembering his determination to share the Good News. His brilliant telling of the story of Jesus has captured the minds and hearts of millions of converts down through the ages. His emphasis on the mission of mercy, the dignity of women and the power of prayer has shaped the spirituality of the church and of how we all share in the ministry of Jesus. The story he told is the story we now live. We honor Luke by living this story with courage and joy.

The traditional iconography that depicts the four evangelists is taken from the "four creatures" at the throne of God from Ezekiel and Revelations. Matthew is a winged man, Mark a winged lion, Luke a winged ox, and John an eagle. Luke as ox or bull is meant to symbolize sacrifice, service and strength.