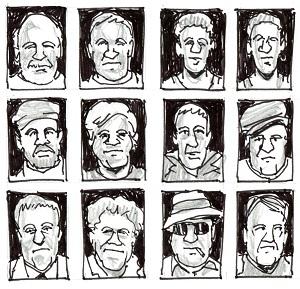 “After a night in prayer on the mountain, Jesus called his disciples to himself, and from them he chose Twelve" (Luke 6:12).

The list of the "Twelve" varies somewhat among the evangelists, but the symbolism reveals how the church by the end of the first century was defining and positioning itself as the fulfillment of the 12 tribes of ancient Israel and the promises made to the Chosen People as part of the Covenant.

This daring claim of succession set the stage for a Jewish movement open to Gentile converts spreading into the Graeco-Roman world after the destruction of Jerusalem in 70 CE. Paul's earlier ministry and the diaspora of both rabbinic Judaism and the Jesus movement propelled this expansion.

Jesus, it seems clear, gathered both men and women around him in his ministry. He was not a lone messianic figure promoting a personal vision, but the catalyst and leader of a movement that caught fire in Roman occupied Palestine. His execution, recorded in both the Gospels and in Roman history, shows that his message was resisted.

Today's commemoration of two of the disciples, Simon and Jude, gives us a glimpse into why Christians may have roused some Roman animosity. Simon, called the Zealot, is associated with insurgent Jewish fighters who opposed the Roman occupation. Both he and Jude are counted among the first martyrs of the early church. Like their Master, many of the first followers of Jesus were executed, which tells us that the church was perceived as a threat to imperial control and ideology.

What we might take from today's feast over 2,000 years later is that Christianity has always been a community enterprise. If God calls us to follow Jesus, God also inspires us to work with one another to build a "beloved community" to transform the larger culture in justice and love.

The first disciples and apostles were both gifted and flawed people. The Gospels make no attempt to hide this. Each follower of Jesus went through a deep conversion to bring them to maturity and holiness in the service of the Gospel. Whatever our limits or doubts, this should encourage us to find our own place in the Jesus movement today.