The Word took me to the “Wild Side” this morning by invoking the memory of a classic tune written by the late songwriter Lou Reed. The lyrics to “Take a Walk on the Wild Side” invited me to reflect on just how radical Jesus must have seemed to his contemporaries. He was a poet and storyteller who came from outside the theological establishment. He quickly gained a questionable reputation for associating with society’s misfits and outcasts, and he had the audacity to say that God sought them out and loved them.

How easy it would have been to reject this strange yet charismatic figure when he came to Jerusalem and stirred things up.  He called out on the Temple priesthood by disrupting the money exchange and animal markets and, in doing so, provoking the Roman authorities, who took their cut of that revenue.

In today’s Gospel, Jesus addresses the challenge of entering God’s Kingdom through the “narrow gate,” then said that many sinners would get in while those who thought they had an automatic pass would be too proud to fit through the portal.

It is a curious image coming from someone who seemed to be throwing the gates of heaven wide open to anyone seeking God’s unconditional love.  It also suggested a whole set of paradoxes that describe God’s mysterious ways:  The first will be last and the last will be first; Mercy and compassion, not sacrifice or legal purity, are what get God’s attention.

Of course, God blesses virtue and discipline because they make for an orderly life, but God is also on the lookout for the lost and the broken-hearted, life’s chaotic radicals and troublemakers. Jesus’ many parables imagine God heading out into the night to roam the steamy underground of forbidden and dangerous haunts to retrieve a beloved son, a reckless daughter, an abused child of the streets. This is what Jesus did, and this is why he became an outcast himself.

Reed’s "Walk on the Wild Side" was a shocking, ironic anthem to society’s misfits, hustlers and gender-bending radicals. Many listeners, drawn to the song’s browsy bass lines, sexy drum and saxophone backup, may have missed Reed’s lyric narrative, but the song inspired a generation of artists to use their music to invite listeners to consider the humanity of those left outside the mainstream.

In the same way, Jesus, God’s probe into the shadow side of human nature, went to the Wild Side to take upon himself the rejection that made his death on the cross inevitable but also redeemed us all --every one of us-- for glory.

Here is a paradox in the parable: Enter by the narrow gate. Do not count on religion to save you if you hate your brothers and sisters for their sins. Be prepared to follow Jesus wherever he goes. 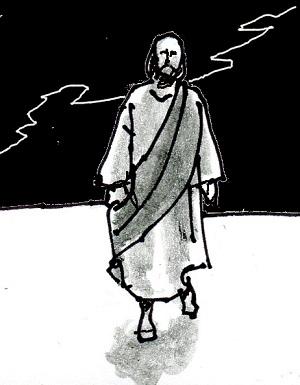