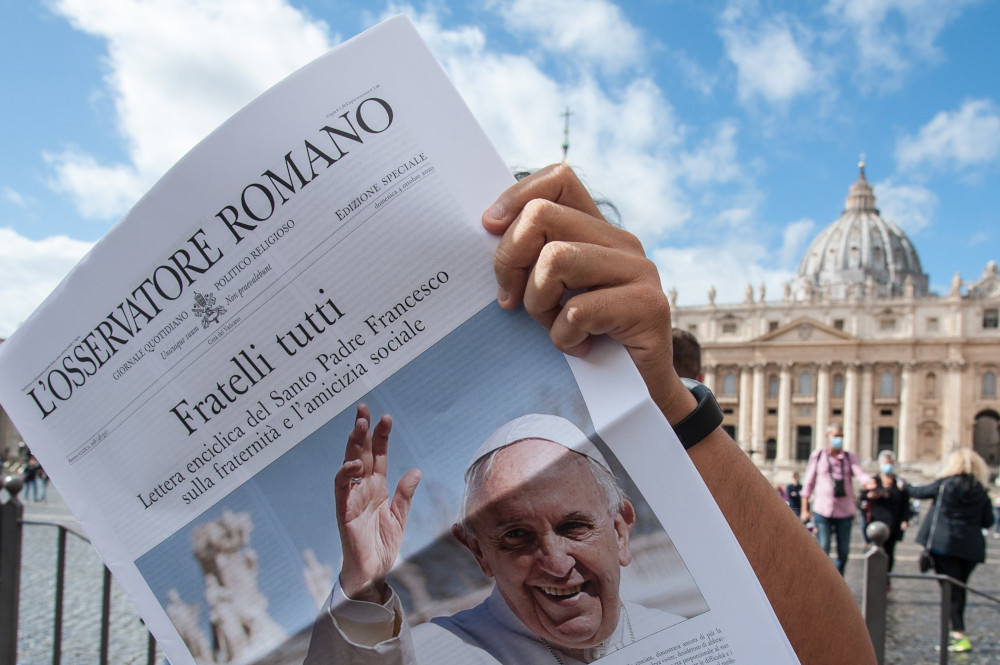 Free copies of L'Osservatore Romano, the Vatican newspaper, with the front page about Pope Francis' new encyclical, Fratelli Tutti, on Fraternity and Social Friendship, are distributed by volunteers at the end of the Angelus in St. Peter's Square at the Vatican Oct. 4, 2020. (CNS/Reuters/IPA/Sipa USA)

Fratelli Tutti ("Brothers all"), the new papal encyclical on fraternity and social friendship, is an important teaching document that must be read by anyone who wants to know where Pope Francis is coming from.

Through the centuries, popes have written letters or encyclicals on important issues, sometimes addressed to bishops, other times to all Catholics, more recently to all people.

By using the encyclical format, Francis is announcing he has something important to say about fraternity and friendship, and he wants people to pay attention.

Here are five things to look for in the new encyclical.

First, there are a few ways to take in the new encyclical: skim it or read it slowly in small chunks. I don't recommend trying to get through the 43,000-word document, written in stately papal prose, as you would a book — say over a weekend. You'll find yourself nodding off.

Skimming the encyclical for a few juicy quotes will get you ready for the next Catholic cocktail party.

But if you want to understand Francis, take your time. Do not try to read more than a chapter in one sitting. Give the text time to marinate. Each chapter takes time to digest.

Chapter 1 describes the sad state of the world. It is depressing, yet the pope offers hope. "Difficulties that seem overwhelming," he writes, "are opportunities for growth, not excuses for a glum resignation that can lead only to acquiescence."

Chapter 2, a meditation on the parable of the good Samaritan, could make good material for parish discussion groups.

Chapters 3 and 4 present the pope's fundamental vision. "The spiritual stature of a person's life is measured by love," he writes. This love must extend beyond family, tribe and nation to strangers, migrants and all people into a social friendship where the worth of every person is acknowledged. These chapters are foundational to Francis' approach to humanity and its problems.

Chapter 5 presents the pope's political philosophy, Chapter 6 is on the importance of social and cultural values, and Chapter 7 deals with reconciliation and peace building. One can only wish politicians and world leaders read these chapters, which stress that we should see everyone as our brother and sister and treat them with kindness and respect.

Finally, Chapter 8 speaks of the role of religion in building fraternity. This chapter will be especially useful for ecumenical and inter-religious dialogs. 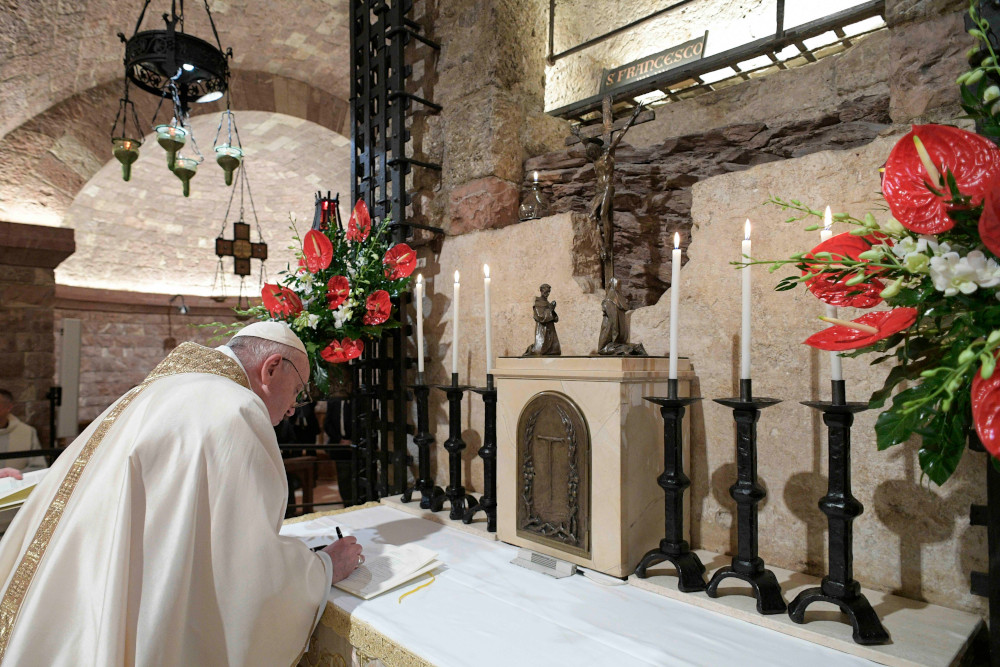 2. You've heard much of this before

The second thing to note about the encyclical is that much of it repeats what Francis has said before. Quotations make up more than a fourth of the encyclical, with 288 footnotes to lead the reader to their sources.

Here Francis is like an op-ed writer who, after seven years of writing, has decided to repackage his work and present his thoughts in a comprehensive and systematic way.

There may also be a theological strategy behind all of these quotes. By incorporating past sayings from homilies, speeches and statements into an encyclical, one of the highest levels of teaching in the church, he raises their authority. Surely he had this in mind when he quoted extensively from last year's Abu Dhabi agreement with the Grand Imam of Al-Azhar, Sheikh Ahmed Al-Tayeb. These citations are now the official teaching of the church.

3. You're not going to be shocked

The third thing to note about the encyclical is that there are no bombshells. He avoids mentioning the topics the media likes to write about. He says nothing about internal church issues. He mentions abortion only once in passing. There is nothing about LGBTQ persons and little about women.

What he does say about women is positive: "The organization of societies worldwide is still far from reflecting clearly that women possess the same dignity and identical rights as men." He also condemns violence against women and human trafficking. The encyclical sees men and women as equal partners in dealing with the world's problems.

The encyclical does express strong views on capital punishment, war and economics, but the pope writes with nuance. He offers no simple solutions, instead encouraging dialog and inclusion: Everyone must be brought into the conversation and decision-making process to deal with the world's challenges. 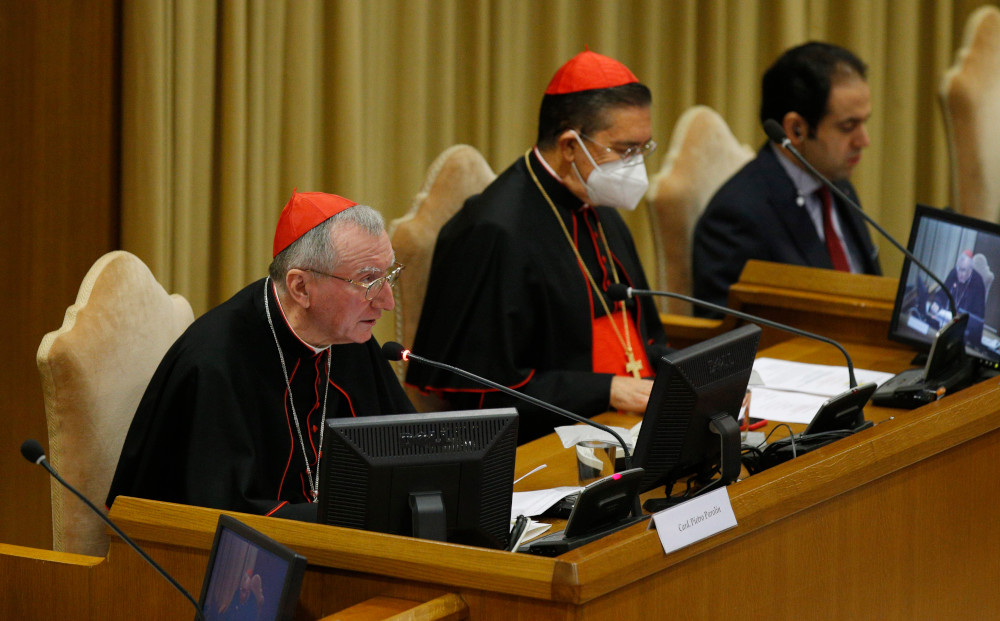 4. It's an assertion of values, not a prescription of solutions

The fourth thing to note about the encyclical is that, though it does make specific proposals, it is more about attitudes and values than programs. In his meditation on the good Samaritan, he concludes, "The decision to include or exclude those lying wounded along the roadside can serve as a criterion for judging every economic, political, social and religious project."

He also speaks eloquently of kindness that involves "speaking words of comfort, strength, consolation and encouragement" and not "words that demean, sadden, anger or show scorn."

For Francis, however, kindness is not just a personal virtue, but something that needs to permeate culture. Because kindness "entails esteem and respect for others, once kindness becomes a culture within society it transforms lifestyles, relationships and the ways ideas are discussed and compared," he writes.  "Kindness facilitates the quest for consensus; it opens new paths where hostility and conflict would burn all bridges."

This should lead to a "culture of encounter," he says, where people "should be passionate about meeting others, seeking points of contact, building bridges, planning a project that includes everyone."

But this focus on high-minded values does not stop Francis from telling politicians they should implement these values.

Politicians are doers, builders with ambitious goals, possessed of a broad, realistic and pragmatic gaze that looks beyond their own borders. Their biggest concern should not be about a drop in the polls, but about finding effective solutions to "the phenomenon of social and economic exclusion, with its baneful consequences: human trafficking, the marketing of human organs and tissues, the sexual exploitation of boys and girls, slave labour, including prostitution, the drug and weapons trade, terrorism and international organized crime."

5. This is not a document only for Americans

The fifth thing to note about the encyclical is that it is written for the entire world, not just for the church and not for the United States. Do not try to read it in the context of the presidential election!

The philosophical style of the encyclical, in fact, may be more accessible to Europeans and Latin Americans than to U.S. citizens, who tend to be more pragmatic and concrete in their thinking. For that very reason, the encyclical is especially useful to Americans who need to raise their eyes to a higher vision while at the same time maintaining their practical focus.

In conclusion, this encyclical is not a quick read that can be used for partisan bickering. It is a work that requires meditation for true understanding. It should provide input for philosophers and theologians as well as political and social leaders and ordinary citizens.

Encyclicals are important but rare teaching documents under Francis. He has only issued two other encyclicals. The first, Lumen Fidei ("The light of faith") was basically written by Pope Benedict XVI before he resigned. Francis made minor changes and signed onto the encyclical in 2013 to show the continuity between his papacy and that of Benedict.

The second, Laudato Si'  ("Praise be to you"), was a clarion call to action on behalf of the earth, which is suffering from environmental devastation and global warming. The response to the 2015 letter was overwhelmingly positive except from climate-change deniers.

Fratelli Tutti, Francis' third encyclical, presents his vision of how humanity must respond to the needs of the 21 century. It will take time to absorb, but it can be life sustaining.