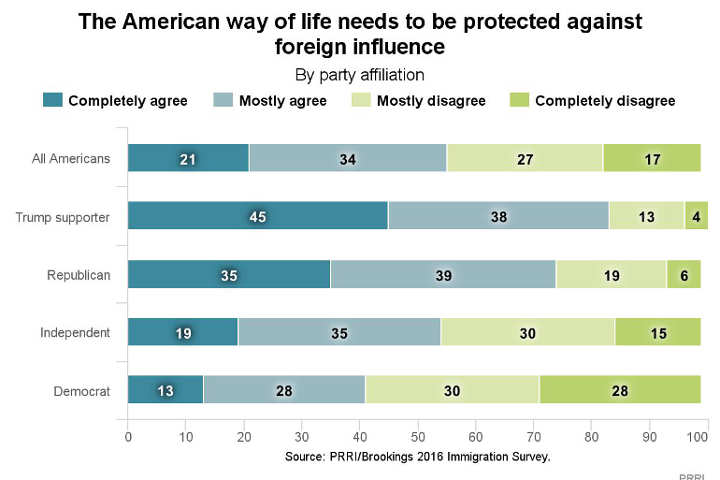 It is a gloomy electorate, deeply divided on fundamental issues and increasingly worried about terrorism, crime and personal economic security, that candidates will face as the general election season turns toward the national conventions later this summer.

That portrait of the country -- as anxious and divided not only by political party but on some issues sharply divided by race, class and age -- is contained in a wide-ranging poll, "How Immigration and Concerns about Cultural Changes Are Shaping the 2016 Election,"* released today by the Public Religion Research Institute and the Brookings Institution.

While many standard indicators suggest the country is experiencing economic growth, the survey found that 70 percent of Americans continue to believe the United States is still in an economic recession, a view that has remained relatively unchanged since 2012.

Americans also are evenly divided over the country's direction, with a majority believing that the United States must be protected against foreign influence.

That number increases to 68 percent among both Republicans and Donald Trump supporters. The view is flipped among Democrats, with 66 percent saying things have improved. Among independents, according to the poll, the breakdown closely mirrors the 50-50 split in the general public.

Fifty-five percent of those questioned also believe that the American way of life needs protection against foreign influence. Forty-four percent disagree. Among Republicans, the percentage of those believing the American way of life is threated by foreign influence rises to 74 per cent and to 83 percent among Trump supporters. Only 41 percent of Democrats have the same concern.

Belief that the U.S. is a Christian nation is slipping among white evangelical Protestants. The number who believe the U.S. is no longer a Christian has increased from 48 percent in 2012 to 59 percent today.

For all of the fear of foreign influence, Americans "remain firmly committed to an immigration policy that would allow illegal immigrants a way to become citizens, compared to other policy options," according to the report. Sixty-one percent said immigrants living in the United States illegally should be allowed a path to citizenship provided they meet certain requirements. Roughly one in five prefer permanent residency status rather than citizenship and 21 percent say all immigrants living in the U.S. illegally should be deported. Among Democrats, 72 percent favor a path to citizenship and another 15 percent say they would allow illegal immigrants to become legal residents but not citizens; among independents, 62 percent favor a citizenship option with 16 percent favoring permanent legal status. Only 49 percent of Republicans favor a citizenship path, with 22 percent saying they would allow permanent legal status.

The Catholic majority is split significantly on the immigration issue. "More than three quarters (77%) of Hispanic Catholic prefer allowing illegal immigrants an opportunity to become citizens, compared to 55 percent of white Catholics."

Nearly 60 percent of all Americans oppose the proposal to build a wall along the U.S. border with Mexico as a way of keeping immigrants out, but the political parties are deeply divided on the matter, with 66 percent of Republicans in favor of the idea. Only 40 percent of independents and 23 percent of Democrats support the idea.

A majority of Americans (55 percent) also oppose passing legislation to keep Syrian refugees from entering the United States. Within that majority, only small differences exist among racial and ethnic groups. Sharp divides exist, however, among religious groups. Fifty-four percent of white evangelical Protestants and 53 percent of white mainline Protestants support such a law. Among white Catholics, the split is 49 percent supporting such a law and 51 percent opposed. However, only 45 percent of Hispanic Catholics and 36 percent of black Protestants support such a ban.

In contrast, 67 percent of religiously unaffiliated Americans and 73 percent of those who belong to non-Christian faiths oppose the ban on Syrian refugees.

Terrorism tops the list of concerns for Americans with 69 percent saying it is "a critical issue to them personally." Unemployment is second with 55 percent naming it a critical issue; 48 percent name crime as a top issue followed by the cost of education (44 percent); the growing gap between rich and poor (43 percent); and immigration (43 percent).

On the other hand, Republicans are more likely than Democrats to name immigration (59 percent to 35 percent, respectively) and terrorism (85 percent to 60 percent) as top issues.

The study found that nationally the Republican Party faces "an enduring deficit in how it is viewed among the public." Only 35 percent of Americans view the GOP favorably, while 59 percent hold an unfavorable view. In contrast, 50 percent of the public view the Democratic Party favorably compared to 45 percent who have a negative view of the party. The long 2016 primary season has had little effect on the view of the parties, according to the report, which notes that last August, 36 percent of Americans held a positive view of the Republican Party, while 49 percent viewed the Democratic Party favorably.

The margin of error for the survey, which was conducted between April 4 and May 2, is plus or minus 2.7 percentage points. Interviews were conducted both online and by telephone among 2,607 adults age 18 and up.

*This story has been updated to correct the report's title, specify a group as white mainline Protestants, and clarify language about two-thirds of Americans.