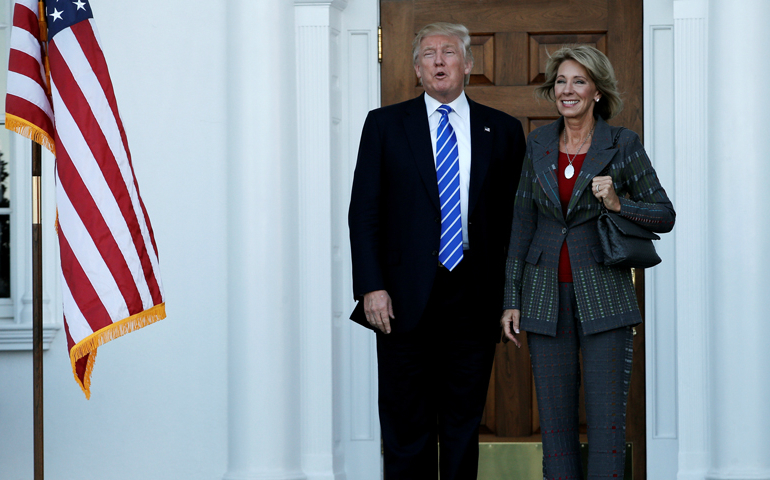 President-elect Donald Trump stands with Betsy DeVos after their meeting at the main clubhouse at Trump National Golf Club in Bedminster, N.J., on Nov. 19, 2016. (Reuters/Mike Segar)

An education secretary who supports school vouchers to get more children into private religious schools. A White House strategist whose ex-wife accused him of anti-Semitism. A national security advisor who called Islam "a political ideology hiding behind a religion."

After a campaign in which President-elect Donald Trump was accused of trafficking in bigotry and hatred, and of changing his views to the win the conservative religious vote, he is choosing Cabinet members who have made controversial statements on religious and ethical issues.

Here is a list of some of the appointees and what they have said and done.

Pruitt is a member of the First Baptist Church of Broken Arrow, Okla. where he has served as a deacon. First Baptist is affiliated with the Southern Baptist Convention, which has opposed marriage equality, reproductive rights for women and opposes LGBTQ rights, including bathroom access for transgender persons.

Pruitt is on the record about some of these things. He approved the Supreme Court's to uphold an employer's right to deny birth control access to employees on the basis of religious objections. He sought an injunction to prevent transgender bathroom access, and he said he disagreed with the Supreme Court's ruling on marriage equality.

He is also a known climate change denier, though it is unclear if that is linked to his religious views.

Ben Carson, the neurosurgeon-turned-Republican presidential nominee-turned Trump supporter, has been nominated to run the Department of Housing and Urban Development.

A Seventh-day Adventist who has been baptized twice, he spoke about his faith during the 2013 National Prayer Breakfast speech, blasting both Obamacare and political incorrectness.

During the 2016 election cycle, he said he believed the world literally was created in six days, as some but not all conservative Christians do. He confirmed that in a 17-year-old video he said the biblical Joseph built the pyramids in Egypt to store grain (they are really Pharaohs’ tombs). And he tried to link Hillary Clinton to Lucifer.

Other controversial opinions he voiced during the campaign were that he “would not agree with” electing a Muslim to be president and that Islam was not consistent with the U.S. Constitution.

"Dr. Carson's views on Islam, American Muslims and the world are dangerously ill-informed and could negatively impact any government agency he heads," said Nihad Awad of the Council on American-Islamic Relations.

James "Mad Dog" Mattis, a retired Marine general known to his troops as "the warrior monk" for his dedication to the philosophy of war, is Trump's pick for Secretary of Defense.

Mattis has said he disagrees with Trump's plan to ban Muslim immigrants. “They think we’ve completely lost it," he said of U.S. allies. "This kind of thing is causing us great damage right now, and it’s sending shock waves through this international system."

Subordinates say religion is a factor Mattis, 66, took into consideration when planning a mission. "He told me how he saw us fighting — and where — and how he was getting us ready to do just that," former Marine Stanton Coerr wrote of Mattis in the journal of the non-profit organization The Bridge. "He laid out history, culture, religion and politics, and he saw very clearly not only where we would fight, but how Seventh Marines, a desert battalion, fit into that fight."

One of Trump's first appointments was Reince Priebus as his chief of staff.

He reportedly has maintained dual participation at two Racine, Wis., churches: Kimissis Greek Orthodox Church and Grace Church, where he started a Bible study and prayer group for young married couples, according to The Journal Times.

In an interview with Mother Jones, Bannon called Breitbart Media, which he previously headed, "the platform for the alt-right," a white nationalist movement. He also called its ideology "nationalist," though he did not specifically identify it as "white nationalist." His ex-wife has accused him of anti-Semitism— a charge his spokesperson has denied — and both the ADL and Religious Action Center of Reform Judaism protested his appointment because of Breitbart's anti-Semitic ideology.

Bannon told Bloomberg News, "I come from a blue-collar, Irish Catholic, pro-Kennedy, pro-union family of Democrats." He delivered a 2014 speech via Skype to a conference held inside the Vatican, the seat of Catholicism, describing a "crisis both of capitalism but really of the underpinnings of the Judeo-Christian West in our beliefs."

Lt. Gen. Michael T. Flynn has been tapped as the assistant to the president for national security affairs.

Flynn is a retired intelligence officer and member of the board of advisers for ACT For America, which the Southern Poverty Law Center has called the "largest grassroots anti-Muslim group in America." He has referred to Islam as a political ideology hiding behind a religion, according to The Dallas Morning News, and tweeted that it is rational to be afraid of Muslims.

Like Bannon, Flynn was born and raised in an "Irish-Catholic family of blue-collar Democrats."

Sessions previously was a prosecutor for the Justice Department. (He was denied a federal judgeship over testimony that he had made racist remarks.) He's made clear he's "not happy" about the direction the department has taken under President Obama's administration, calling its refusal to defend a federal ban on same-sex marriage "shameful," according to The New York Times.

U.S. Rep. Mike Pompeo, who was elected in 2010 as part of the Tea Party movement, is Trump's choice for director of the CIA.

In Congress, the Kansas Republican has supported conservative Christians' stance on abortion rights, voting to defund Planned Parenthood and telling The Associated Press he believed abortions only should be allowed to save the life of the mother.

He has drawn reproach from the Council on American-Islamic Relations for some of his comments about Muslims. Months after the Boston Marathon bombing, he said, "The silence of Muslim leaders has been deafening." CAIR pointed out that a number of Muslim institutions had issued statements condemning the bombing and calling for prayer and humanitarian aid.

He also played a key role in a controversy that led a Wichita, Kan., mosque to cancel a speaking engagement by a man some considered a supporter of terrorism.

Pompeo; his wife, Susan; and their son, Nicholas, reportedly attend Eastminster Presbyterian Church, where he serves as a deacon and has taught the fifth-grade Sunday school class.

Betsy DeVos, Trump's pick for secretary of education, has many church-state separationists on the alert for her support of school vouchers — the use of public money to send children to private, often religious, schools. Vouchers are a darling of the evangelical Christian set and Vice President-elect Mike Pence.

DeVos has deep roots in the Christian Reformed denomination, graduating from Calvin College and attending Mars Hill Bible Church in Grand Rapids, Mich. Her husband, Dick DeVos, is a former candidate for Michigan governor who supported the teaching of "intelligent design" in public schools.

Sen. Lamar Alexander, the Republican chairman of the Senate Committee on Health, Education, Labor and Pensions, has called her an “excellent choice” for the role. But Casey Brescia, communications director for the lobbying group Secular Coalition for America, writes that by selecting DeVos, "the incoming Trump Administration intentionally might have gone out of its way to choose a candidate that would reward the religious right for their unwavering loyalty during the campaign."

Nikki Haley, the Republican governor of South Carolina, is being considered as ambassador to the United Nations.

Haley was born into a Sikh family that immigrated to South Carolina from India. She converted to Christianity after marrying Michael Haley in 1996. She now attends a Methodist church but occasionally visits Sikh temples with her parents.

In 2010, Haley updated a statement about her faith on her website, taking it from a general belief in God to a specific belief in Jesus. "My faith in Christ has a profound impact on my daily life and I look to Him for guidance with every decision I make," the website said. "God has blessed my family in so many ways and my faith in the Lord gives me great strength on a daily basis. Being a Christian is not about words, but about living for Christ every day."

Tom Price, an orthopedic surgeon and U.S. representative from Georgia, is Trump's pick to head the Department of Health and Human Services.

Price is a Presbyterian who attended Emory University, affiliated with the United Methodist Church.

In Congress, Price's legislation and voting record reflect an alignment with conservative Christianity. He is opposed to same-sex marriage and has voted to limit abortion rights. In 2008, he signed a pledge that he would not support global warming legislation that raises taxes.

President-elect Trump selected Steven Mnuchin, a former Goldman Sachs partner and his campaign finance chairman, as Secretary of the Treasury.

Mnuchin, who is 53, has been described as "a very smart guy" by Lloyd Blankfein, the CEO of Goldman Sachs who, like Mnuchin, is Jewish, and who, unlike Mnuchin, was the subject of a pre-election advertisement supportive of Donald Trump that some criticized as anti-Semitic.