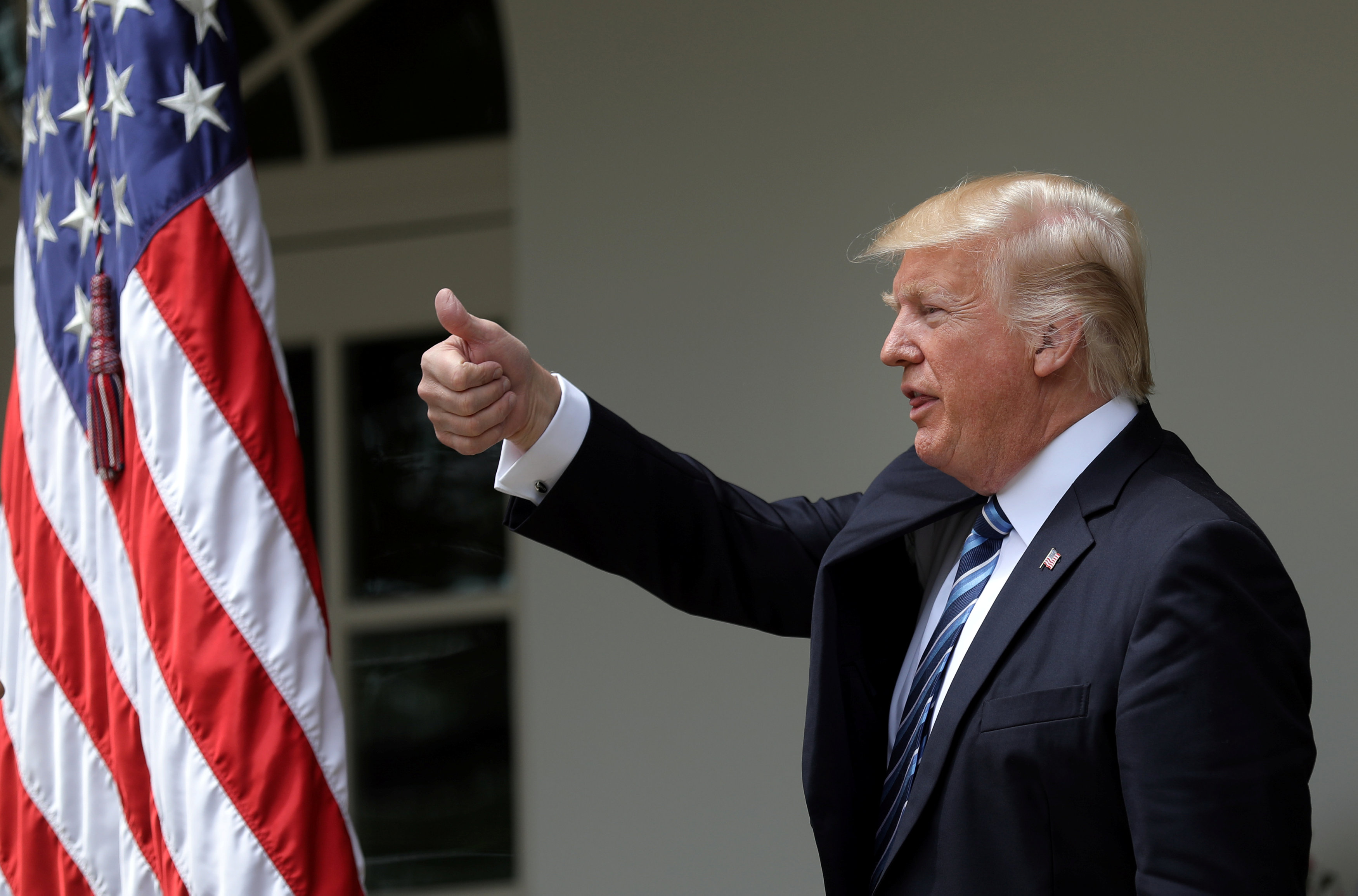 U.S. President Donald Trump gives a thumbs up during a National Day of Prayer event at the Rose Garden of the White House in Washington D.C., U.S., May 4, 2017. (REUTERS/Carlos Barria)

U.S. President Donald Trump said on Thursday he will travel to Saudi Arabia and Israel this month as part of his first foreign trip, wading directly into the tangled diplomacy of Middle Eastern politics.

Trump said he would also visit the Vatican along with his swing through the Middle East, which was added to a trip that includes a NATO meeting in Brussels on May 25 and the Group of Seven summit in Sicily on May 26.

In a speech in the Rose Garden at an event on religious liberty, Trump cast his trip as an effort to build cooperation and support between Muslims, Christians and Jews for fighting terrorism.

"Our task is not to dictate to others how to live but to build a coalition of friends and partners who share the goal of fighting terrorism and bringing safety, opportunity and stability to the war-ravaged Middle East," Trump said.

Trump's predecessor President Barack Obama had a testy relationship with both Israel and Saudi Arabia, whose leaders viewed him as being concerned less with traditional alliances than with negotiating a deal to rein in Iran's nuclear program.

Trump has made forging peace in the Middle East and fighting Islamic State a focus of his administration's foreign policy.

Trump complained in an interview with Reuters last week Saudi Arabia was not treating the United States fairly and that Washington was losing a “tremendous amount of money” defending the kingdom.

Saudi Arabia's powerful Deputy Crown Prince Mohammed bin Salman met Trump in Washington in March in a visit a senior Saudi advisor called a "historical turning point" in relations. Trump has said he is counting on Gulf allies in his fight against Islamic State militants.

Trump, who met with Israeli Prime Minister Benjamin Netanyahu at the White House in February, has assigned his son-in-law Jared Kushner to oversee efforts to broker peace between Israel and the Palestinians.

Trump met with Palestinian President Mahmoud Abbas at the White House on Wednesday but did not say how he would revive long-stalled peace talks.

Trump has asked Israel to limit its building of Jewish settlements on land the Palestinians want for a state.

Trump will visit with Pope Francis at the Vatican on May 24, the Vatican announced late in Rome on May 4. He will also meet that day with the Vatican's Secretary of State Cardinal Pietro Parolin.