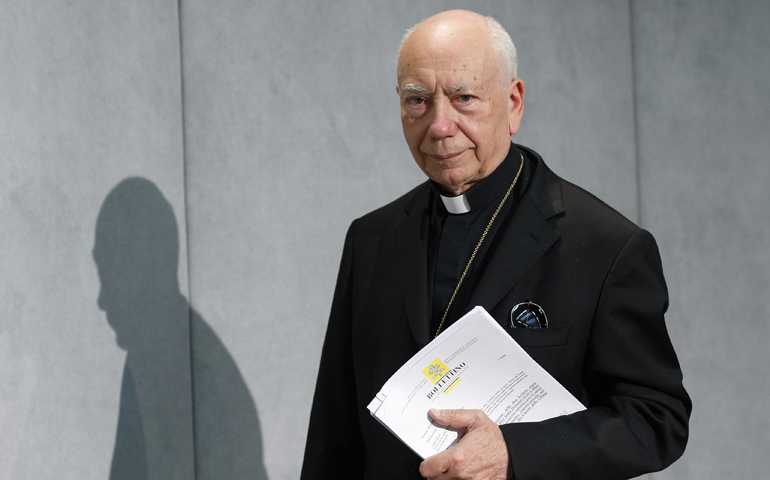 Francesco Coccopalmerio, president of the Pontifical Council for Legislative Texts, arrives for a Vatican press conference in this Sept. 8, 2015, file photo. (CNS/Paul Haring)

The cardinal who heads the Vatican office responsible for interpreting the laws of the Catholic church affirmed in a new book that Pope Francis' apostolic exhortation Amoris Laetitia allows divorced and remarried persons to take Communion under certain circumstances.

Cardinal Francesco Coccopalmerio, the president of the Pontifical Council for Legislative Texts, said remarried people can be admitted to the sacraments of reconciliation and the Eucharist when they have a sincere desire to change their marital situation but cannot without causing harm, particularly to their children.

The cardinal, a canon lawyer and moral theologian, also suggested that access to Communion for divorced and remarried people be determined in most cases by their parish priest, who "knows the people directly and can for that reason can give an adequate judgment in these delicate situations."

Coccopalmerio made his affirmation in a new booklet put out by the Vatican's publishing house Feb. 14, in which the cardinal examined the pope's teaching in the eighth chapter of Amoris Laetitia ("The Joy of Love"), the document Francis wrote following the 2014 and 2015 Synods of Bishops on the family.

The Vatican official's booklet comes as the pope has received an unusual amount of criticism for the exhortation. In an unprecedented step last fall, four cardinals publicly challenged Francis over the document, asking him to answer five yes or no questions about its teaching.

The eighth chapter of the exhortation deals with how the church should treat couples that live in so-called "irregular situations," such as those who have been civilly remarried without obtaining annulments of their first marriages. In the past, such couples had been barred from taking Communion.

Before answering whether the document allows Communion for remarried persons, Coccopalmerio first examined the hypothetical situation of a woman who has been married for 10 years to a man who had been abandoned by his first wife and was left with three small children.

This woman, said the cardinal, "has full awareness of being in an irregular situation."

"She sincerely wants to change her life," he stated. "But, clearly, she cannot. If, in fact, she left the union ... the children would be without a mother. Leaving the union would mean, therefore, not fulfilling a moral duty towards innocent persons."

Relating that hypothetical situation to the text of the exhortation, Coccopalmerio cited the document's 305th paragraph, which states: "It is possible that in an objective situation of sin ... a person can be living in God’s grace, can love and can also grow in the life of grace and charity, while receiving the Church’s help to this end."

The cardinal also cited a footnote to that sentence, the document's 351st, which states: "In certain cases, this can include the help of the sacraments."

Coccopalmerio concluded: "The church, therefore, could admit to reconciliation and the Eucharist faithful who are in illegitimate unions, when ... two essential conditions are present: they desire to change their situation but cannot carry out their desire."

The cardinal said the situation of such persons "should undergo an attentive and authoritative discernment on the part of ecclesial authority."

"The ecclesial authority will be, at least normally, the parish priest," he continued, adding that bishops might offer consultation or give specific authorization to couples in certain cases.

In response to those who fear that admitting remarried people to the Eucharist could cause scandal in the church, Coccopalmerio said such scandal can be avoided by "instructing the faithful" and explaining to them that such remarried persons "by the judgment of the ecclesial authority that knows their situation" have a desire to change but cannot do so.

The cardinal suggested that national bishops' conferences could also issue guidelines "to instruct the faithful and their pastors in this delicate material."

Coccopalmerio also answered those who might suggest that remarried persons with children could "live as brother and sister," having to abstain from sex in order to take the Eucharist.

In response to that suggestion, the cardinal pointed to the 329th footnote of the exhortation. That footnote cites from the Second Vatican Council document Gaudium et spes, which acknowledged that in marriages without intimacy "it often happens that faithfulness is endangered and the good of the children suffers."

Coccopalmerio suggested that when it is possible for a remarried couple to abstain "without difficulty" from sex they should do so.

However, in a marriage in which such a commitment would "cause difficulty" the cardinal pointed to the exhortation's acknowledgment that someone can "be in a concrete situation which does not allow him or her to act differently and decide otherwise without further sin."

A version of this story appeared in the Feb 24-March 9, 2017 print issue under the headline: Cardinal: Document allows Eucharist for some remarried.