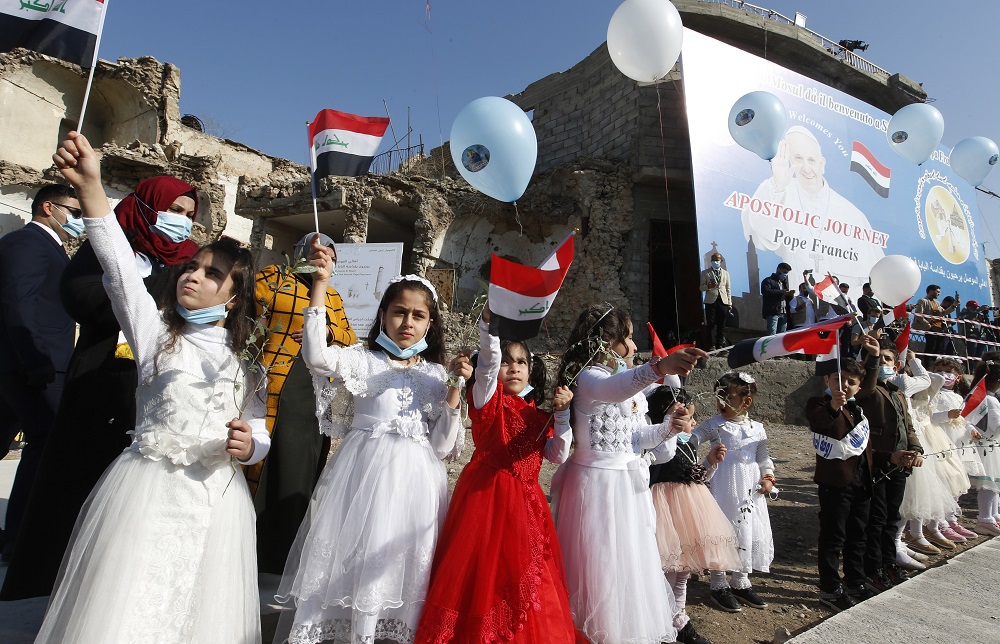 Children wave Iraqi flags before Pope Francis' arrival for a memorial prayer for the victims of the war at Hosh al-Bieaa (church square) in Mosul, Iraq, March 7, 2021. (Paul Haring/CNS)

One hour after his plane touched down in Rome after a historic three-day trip to Iraq, Pope Francis received praise from U.S. President Joe Biden, heralding the papal journey as "symbol of hope for the entire world."

"To see Pope Francis visit ancient religious sites, including the biblical birthplace of Abraham, spend time with Grand Ayatollah Ali al-Sistani in Najaf, and offer prayers in Mosul — a city that only a few years ago endured the depravity and intolerance of a group like ISIS — is a symbol of hope for the entire world," said the nation's second Catholic president in a statement on March 8.

Francis' audacious March 5-8 trip, set against a backdrop of major security concerns inside the country and a global pandemic where cases of COVID-19 were on the rise in Iraq, served two major purposes: to promote interreligious dialogue and to encourage the country's shrinking Christian population.

As a longtime senator and former vice president, Biden once estimated that he had visited the country on two dozen trips, and, in 2002, voted to approve the U.S. war in Iraq, a decision he later said was a mistake. Biden's son, Beau, served in Iraq from 2008 to 2009 as a member of the Delaware Army National Guard.

In his statement, Biden highlighted the country's rich religious heritages, saying "Iraq is a country steeped in religious and ethnic diversity."

"It's also home to one of the oldest and most diverse Christian communities in the world."

In 2017, the U.S. State Department declared a genoicide by the so-called Isalmic State against the country's Yazidis and other minority groups.

"I congratulate the Government and people of Iraq for the care and planning that went into organizing this monumental visit, and continue to admire Pope Francis for his commitment to promoting religious tolerance, the common bonds of our humanity, and interfaith understanding," said Biden.

In addition to Biden, the United States' top diplomat, Secretary of State Antony Blinken, took to social media to praise the pope's trip.

"We believe his visit will inspire hope and help promote religious harmony and understanding among members of the different religions in Iraq and around the world," wrote Blinken.