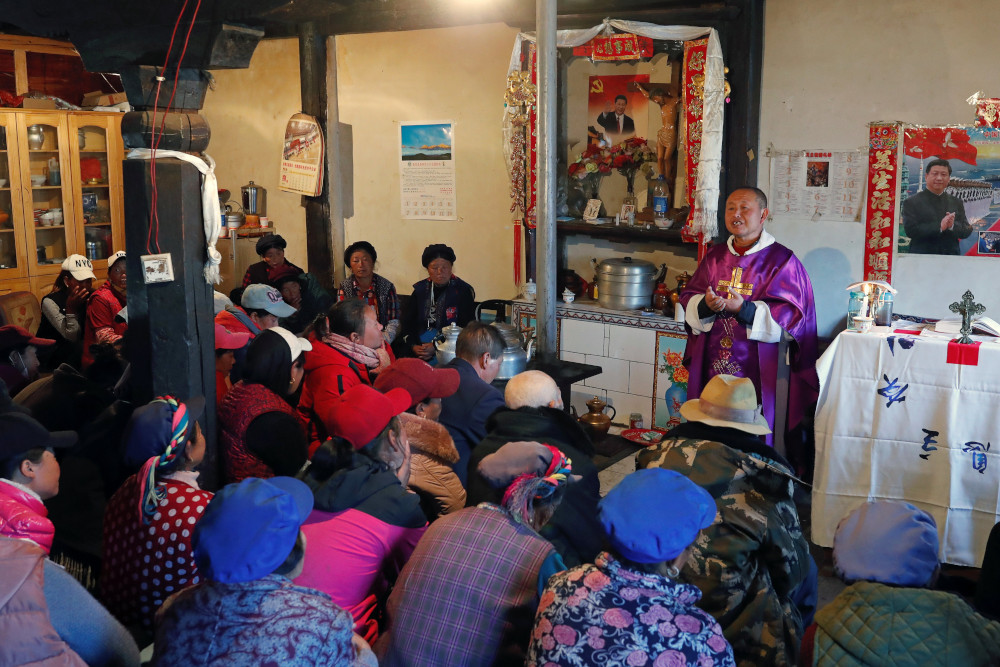 Posters of Chinese President Xi Jinping hang on the wall of the house of a Tibetan Catholic during a Mass celebrated by Father Yao Fei on Christmas Eve in Niuren village, in China's Yunnan province, in this Dec. 24, 2018, file photo. (CNS photo/Tyrone Siu, Reuters)

As the October deadline approaches for the extension of the Vatican's agreement with the Chinese government, the newly appointed editor of the news agency of the Dicastery for Evangelization said the deal has been instrumental in allowing Catholics to practice their faith openly and in communion with the church.

In an editorial published Sept. 22, Gianni Valente, who was appointed earlier in the month as editor of Fides news agency, also said recent statements by Pope Francis and Cardinal Pietro Parolin, Vatican secretary of state, "hinted at a positive intention on the part of the Holy See to continue the process of negotiation."

The agreement, he wrote, has allowed for Chinese Catholics to "experience the adventure of confession of faith in Christ in today's China as it is, without privileges, without being pointed at and perceived as a foreign body, as exotic guests or representatives of distant cultures."

First signed in Beijing Sept. 22, 2018, the Vatican and the Chinese government agreed in 2020 "to extend the experimental implementation phase of the provisional agreement for another two years."

The provisional agreement, the text of which has never been made public, outlines procedures for ensuring Catholic bishops are elected by the Catholic community in China and approved by the pope before their ordinations and installations, according to news reports at the time.

Vatican officials always had said that giving up full control over the choice of bishops would not be what the Vatican hoped for, but that it could be a good first step toward ensuring greater freedom and security for the Catholic community in China.

The deal, however, has been criticized by several prominent figures, including by Cardinal Joseph Zen Ze-kiun, retired archbishop of Hong Kong.

The cardinal, a longtime critic of Beijing who is currently facing charges for failing to properly register a now-defunct fund to help anti-government protesters, said the agreement would "kill" the unofficial or underground church in China, whose leaders refuse to register with the state-run Chinese Catholic Patriotic Association.

In an interview with the Reuters news agency in early July, Francis said that although the agreement is not ideal, it was "moving well, and I hope that in October it can be renewed."

Parolin, in an interview Sept. 3 with an Italian news program, also expressed his hope that the agreement would be renewed. However, he also acknowledged that some difficulties arose during recent negotiations between the Holy See and China.

Nevertheless, he said, "when you negotiate with someone, you must always start from recognizing their good faith. Otherwise, the negotiation makes no sense."

In his editorial, Valente said that since the signing of the agreement, there have been no illegitimate episcopal ordinations and that it allowed for six "clandestine" bishops to obtain "public recognition of their role by the political authorities in Beijing."

All "Chinese Catholic bishops in China today are in full and public communion with the bishop of Rome," he wrote.

Valente said the agreement could not be described as "disappointing," given the fact that the "sacramentality and apostolicity of the church" has been "recognized, preserved and lived in the pastoral framework of the ecclesial life of each Chinese parish."

"Those who qualify the agreement as an operation with mediocre results, or even an error to be regretted, must not only remove the references to the sacramental dynamics which sustain the church, but also hide everything that has happened to Chinese Catholicism in the last 70 years," he wrote.

Despite growing tensions between China and some Western countries, especially the United States, Valente said that no one in China "thinks of insulting the pope and the Catholic Church as agents of hostile forces."

Furthermore, "as international tensions and power clashes escalate, it is also worthwhile to look with faith at the delicate and providential condition in which the small flock of Chinese Catholics find themselves," he said.

"It is precisely in this condition, shared with their compatriots, that they can experience the adventure of confession of faith in Christ in today's China as it is, without privileges, without being pointed at and perceived as a foreign body, as exotic guests or representatives of distant cultures," Valente said.