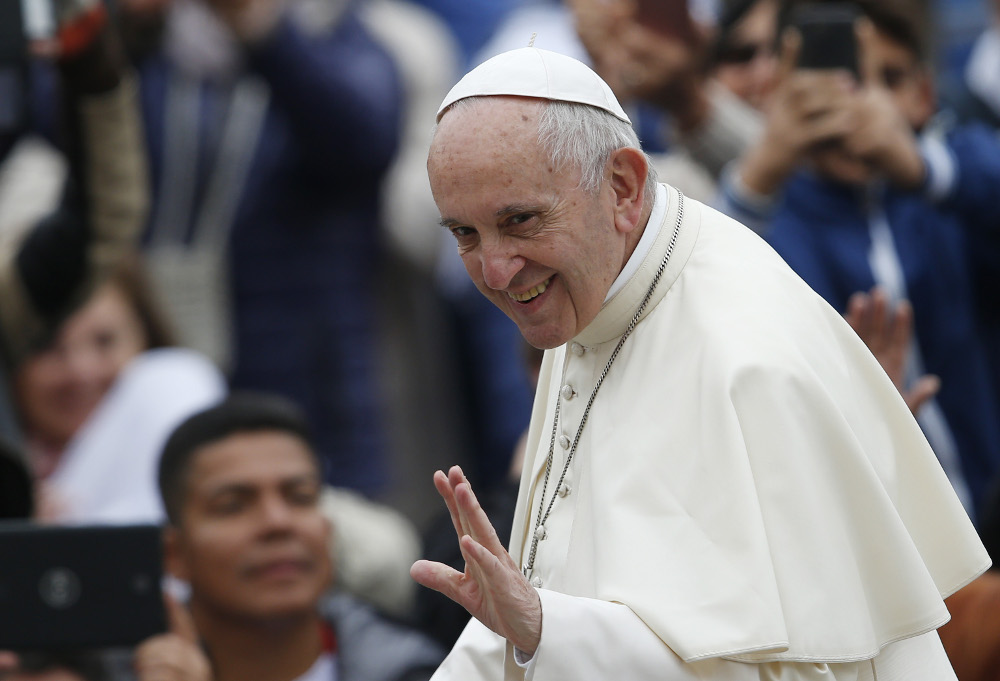 Pope Francis greets the crowd during his general audience in St. Peter's Square at the Vatican Oct. 18. (CNS/Paul Haring)

Christians can find hope even at the hour of death, which faith teaches is not a closed door but a wide-open passage to a new life with Christ, Pope Francis said.

While all men and women are "small and helpless in front of the mystery of death," Jesus' victory over death assures Christians of the joy of the resurrection, the pope said Oct. 18 during his weekly general audience.

Making sure one child was kept warm, the pope pulled up the hood of the baby's jacket before he was taken back to his parents.

Continuing his series of talks on Christian hope, Pope Francis reflected on death, which is "a reality that our modern civilization tends to eradicate" so completely that "when death comes to us or those around us, we are unprepared."

Past civilizations, however, "had the courage to look death in the face," he said, and viewed death not with fear but as "an inescapable reality that forced man to live for something absolute."

Death "shows us that our acts of pride, anger and hatred were vanity: pure vanity," the pope said. "We realize with regret that we have not loved enough and did not look for what was essential."

Before raising Lazarus from the dead, Jesus' mourns his friend's death, the pope noted. Christ's behavior shows that despite hope in the resurrection, Christians can "feel sorrowful when a dear person passes away."

"Christian hope draws from the approach that Jesus takes against human death: if this (death) is present in creation, it is nevertheless a gash that disfigures God's plan of love, and the savior wants to heal us of it," the pope said.

In another instance, he continued, Jesus comforts Jairus after his daughter's death because "he knew that man was tempted to react with anger and desperation."

Jesus' invitation to "not be afraid," he said, is a call for all Christians to guard the "small flame" of faith within that keeps them from falling into "the precipice of fear" that comes at the moment of death.

Departing from his prepared remarks, Pope Francis asked pilgrims to close their eyes and "think about our own death and imagine the moment that will come when Jesus will take us by the hand and say, 'Come, come with me, get up.' "

"There hope will end and it will be a reality, the reality of life," Pope Francis said. "Jesus himself will come to each of us and take us by the hand with his tenderness, his meekness, his love."