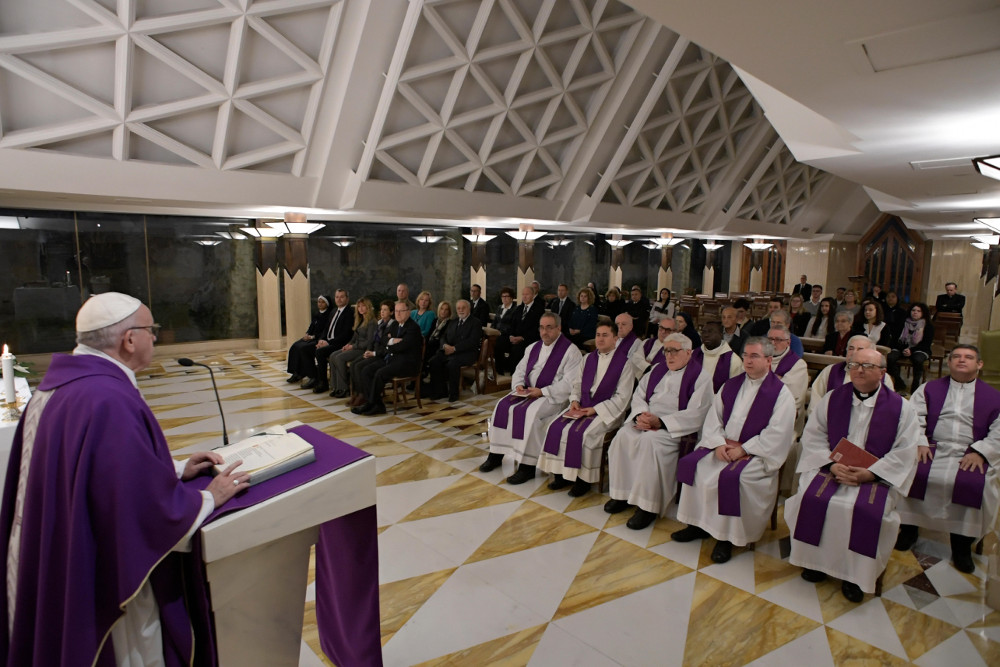 Pope Francis gives the homily as he celebrates morning Mass in the chapel of his residence, the Domus Sanctae Marthae, at the Vatican Dec. 6. (CNS/Vatican Media)

Christians are not people of faith in name only, Pope Francis said; they trust in God, base their lives on his truth and seek to act on the teachings of Jesus.

People with faith in God have not put their hope only in words or in "vanity, pride, in the fleeting powers of life," he said. They put their hopes on solid ground — the Lord, he said in his homily Dec. 6 during morning Mass at his residence, the Domus Sanctae Marthae.

In his homily, the pope reflected on the day's Gospel reading in which Jesus tells his disciples that those who act on his teachings will have built their house on solid rock, while those who only listen to his word and do not act will be fools with a vulnerable house built on sand.

The pope said the Advent season is a time for people to ask themselves, "Am I Christian in words or in deeds? Do I build my life on the rock of God or on the sand of the world, of vanity? Am I humble? Do I seek to always lower myself, without pride, and, in that way, serve the Lord?"

Being Christian in name or words only, he said, is a superficial form of belief, like putting on makeup to look the part. It is going only "halfway — I say I am Christian, but I don't do what Christians do."

"What Jesus proposes is concreteness, always concrete," like the works of mercy, he said.

The consequence of only trying to look Christian by words alone and without concrete action is having a life lacking in any solid foundation, Pope Francis said.

The Lord provides the strength, he said. "Many times, those who trust in the Lord do not stand out, they are not successful, they are hidden. But they are solid."

"The concreteness of Christian life makes us go forward and build on that rock that is God, that is Jesus," not on "appearances or on vanity, pride, connections. No. The truth."