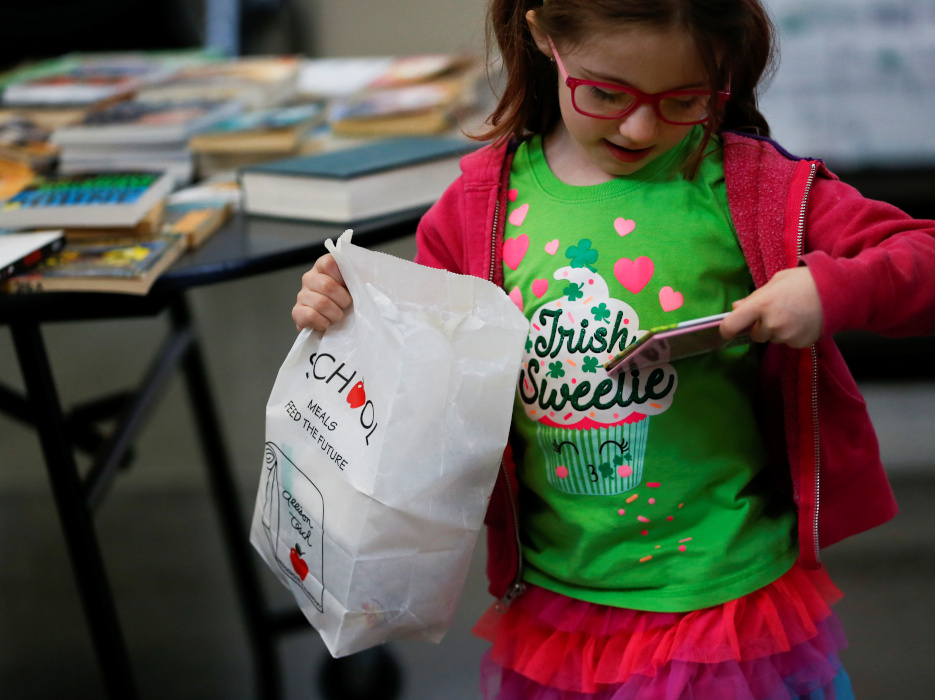 Sammy Kent looks at a free book as she holds her lunch at a student meal distribution site at a Seattle school March 17, 2020. (CNS/ Reuters/Lindsey Wasson)

People must use this time of the coronavirus pandemic to rediscover the importance of small, concrete gestures of affection and care toward others, Pope Francis said in a new interview.

"Sometimes we only experience a virtual form of communication with one another. Instead, we should discover a new closeness. More concrete relationships made of attention and patience," he said in an interview by phone with the Italian daily, La Repubblica, published March 18.

An example of this concreteness, he said, is the self-sacrifice of those who are on the front lines working to save people's lives.

"I thank those who give themselves in this way to others," he said.

"And I ask everyone to stay close to those who have lost loved ones, to be close to them in every possible way. Consolation must now be everyone's commitment," he added.

The pope was asked how people can best use this time of forced isolation or quarantine.

"We must rediscover the concreteness of little things, small gestures of attention we can offer those close to us, our family, our friends. We must understand that in small things lies our treasure," he said.

There are small acts of kindness, affection and compassion that often go unnoticed in daily life, "but they are nonetheless decisive, important," he said.

"For example, a hot meal, a caress, a hug, a phone call. They are familiar gestures of attention to the details of everyday life that make life meaningful and that create communion and communication among us," he said.

The pope said some families normally spend mealtime in silence "because the parents watch television while they eat and children are on their mobile phones. They look like monks, all isolated from each other" with no communication, he said.

"Listening to each other is important because that's how we can understand the needs, efforts, desires of the other. This language made of concrete gestures must be safeguarded. In my opinion, the pain of these days should open us up to this concreteness," he said.

Francis said an article written recently impressed him because it underlined how people's individual behavior affects the lives of others.

Fabio Fazio, an Italian television variety show host, wrote a piece that appeared in La Repubblica March 16, listing all the things he was learning during the nationwide lockdown. Urging readers to also write a list of lessons learned, Fazio said some of his personal reflections included the importance of being close to loved ones, hugging one's children, the need for solidarity and the unfortunate demise of the concept of a nation dedicated to social welfare.

"It has become evident that those who do not pay taxes not only commit a felony, but also a crime (akin to murder because) it is also their fault if there are no hospital beds and respirators," Fazio wrote.

The pope said that line in particular struck him as well as other passages.

Francis was asked what he prayed for when he visited and prayed at two churches in Rome March 15.

"I asked the Lord to stop the epidemic, 'Lord, stop it with your hand.' That's what I prayed for," he said.

When asked what people should do if they have no religious belief, the pope said they are still children of God, who is still looking upon them.

Those who have not yet encountered God and those who lack the gift of faith can still "find their way through this, in the good things they believe in."

"They can find strength in love for their children, for their family, for their brothers and sisters," and they can believe in the love of the people around them "and thus find hope," he said.