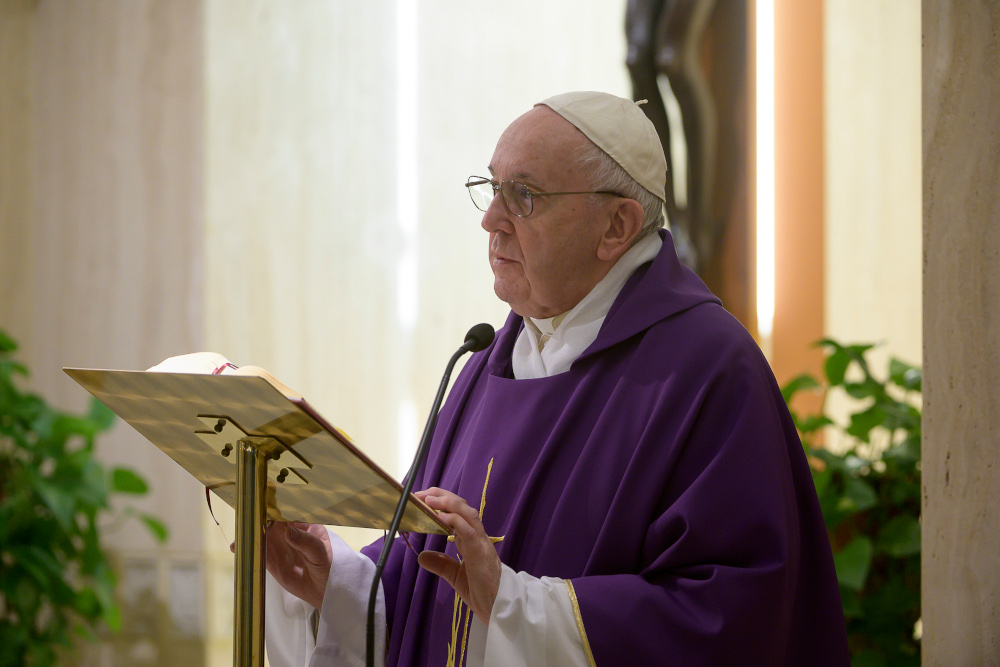 Pope Francis celebrates Mass in the chapel of his Vatican residence, the Domus Sanctae Marthae, March 31, 2020. The pope offered the Mass for those who are homeless, asking that they be helped, especially as communities have stay-at-home or shelter-in-place orders. (CNS/Vatican Media)

As national and local governments have been issuing stay-at-home or shelter-in-place orders to curb the spread of the coronavirus, Pope Francis asked people to pray for and assist those who are homeless.

He offered his morning Mass March 31 for those who are homeless "at a time when people are asked to stay at home."

At the start of a livestreamed Mass from the chapel of his residence, the pope prayed that people become aware of all those who lack shelter and housing and help them and that the church would "welcome them."

In his homily, the pope reflected on the day's first reading and the Gospel reading, which, together, he said, are an invitation to contemplate Jesus on the cross and comprehend how he allowed himself to bear the sin of many and give his life for people's salvation.

The first reading from the Book of Numbers (21:4-9) recalled how God's people, who had been led out of Egypt, became impatient and disgusted with their difficult life in the desert. As punishment, God sent forth poisonous snakes that bit and killed many of them.

Then the people recognized how they had sinned and begged Moses to ask God to send the serpents away. God instructed Moses to craft a bronze serpent and put it on a pole so that those who had been bitten could look at it and live.

The account is a prophecy, Pope Francis said, because it foretells the coming of the Son of God, made to be sin — which is often represented as a serpent — and nailed to a cross so that humanity may be saved.

"Moses makes a serpent and he raises it up. Jesus will be raised up, like the serpent, to offer salvation," he said. What is key, he said, is seeing how Jesus knew no sin but was made to be sin so that people might be reconciled to God.

"The truth that comes from God is that he came into the world to take our sins upon himself to the point of becoming sin. All sin. Our sins are there," the pope said.

"We must get used to looking at the crucifix in this light, which is the truest — it is the light of redemption," he said.

While the readings are difficult to comprehend, the pope asked people to try to "contemplate, pray and give thanks."