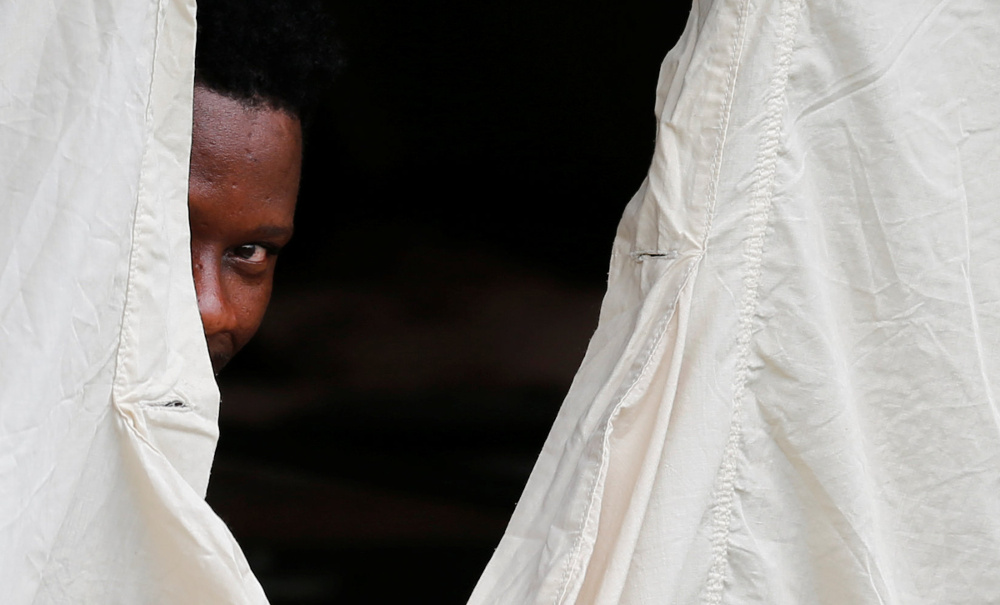 A Haitian refugee sticks his head out from a tent set up by the Canadian Armed Forces near Lacolle, Quebec, Aug. 10. Pope Francis released a statement Aug. 21 urging respect for the life and dignity of migrants and refugees. (CNS/Christinne Muschi, Reuters)

With millions of people fleeing violence, persecution and poverty around the globe, individual nations must expand options that make it possible for migrants and refugees to cross their borders safely and legally, Pope Francis said.

"The principle of the centrality of the human person, firmly stated by my beloved predecessor, Benedict XVI, obliges us to always prioritize personal safety over national security," Pope Francis wrote in his message for the World Day of Migrants and Refugees 2018.

The Vatican will mark the day Jan. 14, while in the United States, the bishops' conference sets aside an entire week—Jan. 7-13—as National Migration Week.

The pope's message for the annual event was released Aug. 21, which is earlier than normal, to stimulate Catholic involvement in the U.N. process for developing and adopting a Global Compact for Migration and a Global Compact on Refugees.

Approving the development of the compacts, "world leaders clearly expressed their desire to take decisive action in support of migrants and refugees to save their lives and protect their rights," the pope said in his message. He urged Catholics to get involved by lobbying their governments to include in the compacts proposals that would ensure the welcome, protection, promotion and integration of migrants and refugees.

For Catholics, he said, "every stranger who knocks at our door is an opportunity for an encounter with Jesus Christ, who identifies with the welcomed and rejected strangers of every age."

"The Lord entrusts to the church's motherly love every person forced to leave their homeland in search of a better future," Pope Francis wrote.

To fulfill its duties toward migrants and refugees, he said, the church needs all of its members to act in solidarity with them, whether it is in countries of departure, transit, arrival or return.

In the message, Pope Francis called for countries to: "increase and simplify the process for granting humanitarian visas and for reunifying families"; grant special temporary visas to people fleeing conflict; uphold the rights and dignity of migrants and refugees "independent of their legal status"; educate people in migrant-sending countries about their rights and obligations abroad; stop the detention of underage migrants; provide migrants, refugees and asylum seekers with work permits so they can begin supporting themselves and contributing to their new communities; and guarantee the right of all migrants and refugees to practice their faith.

"Considering the current situation, welcoming means, above all, offering broader options for migrants and refugees to enter destination countries safely and legally," the pope said.

And, he said, even when faced with situations in which someone has entered a country without the proper legal permits, "collective and arbitrary expulsions of migrants and refugees are not suitable solutions, particularly where people are returned to countries which cannot guarantee respect for human dignity and fundamental rights."

Nations and local communities, the pope said, need to do more to integrate migrants and refugees in the communities that welcome them. Integration does not mean the newcomers will be asked to give up their cultural identity, but that they will have opportunities to share their cultures and to discover the cultural heritage of their new communities.

Pope Francis signed the message Aug. 15, the feast of the Assumption, and entrusted to Mary "the hopes of all the world's migrants and refugees and the aspirations of the communities which welcome them, so that, responding to the Lord's supreme commandment, we may all learn to love the other, the stranger, as ourselves."