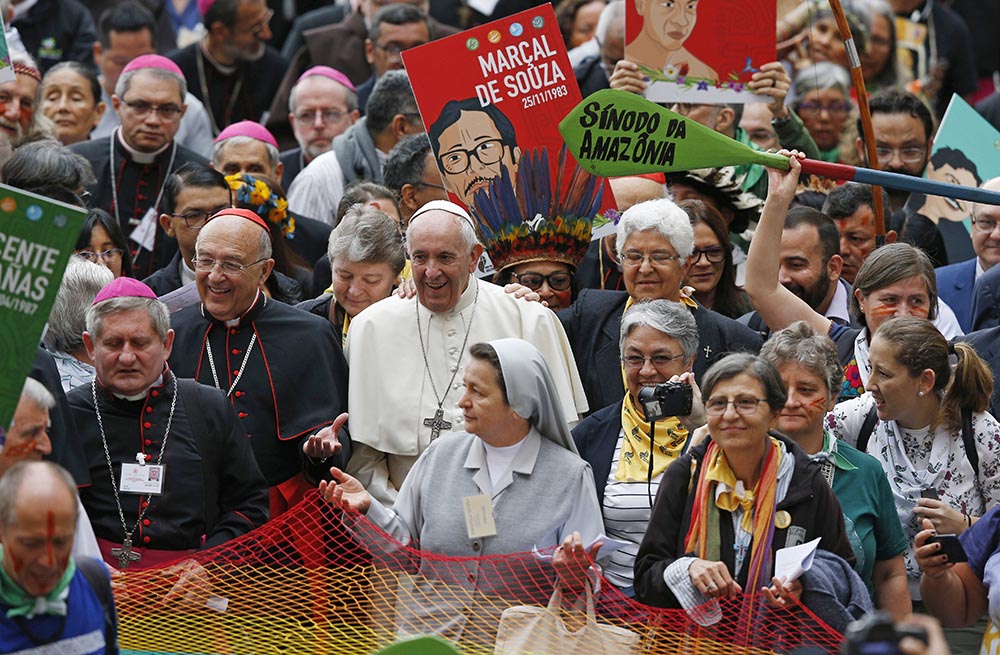 Pope Francis walks in a procession at the start of the first session of the Synod of Bishops for the Amazon at the Vatican Oct. 7, 2019. (CNS/Paul Haring)

In the ninth year of his pontificate, Pope Francis has launched an ambitious three-year worldwide "synodal process".

It will culminate in October 2023 in Rome with the XVI ordinary general assembly of the Synod of Bishops.

At that point, Francis will be almost 87 years old. By that age, all of his predecessors on the Chair of Peter had either died (with the exception of Leo XIII) or had resigned (such as Benedict XVI and Celestine V).

And if, God forbid, the Jesuit pope should not make it to 2023, this "synodal process" will have already begun. It's his insurance policy against the possibility that his pontificate will be promptly archived as a quick break before another pope returns to the status quo.

Even if there should be a conclave between now and the 2023 Synod assembly, the synodal process will be an integral part of the next conclave's agenda in a way not totally different from the papal election of June 1963.

The deceased pope, John XXIII, had already launched the first session of the Second Vatican Council in the autumn of 1962. His newly elected successor, Paul VI, continued the Council and brought the ship into port in December 1965.

It was no coincidence that Francis and his highly regarded Synod secretary general, Cardinal Mario Grech of Malta, announced the synodal process just before Pentecost, the event when the Holy Spirit manifests itself through multiple languages and reveals unity in diversity.

An ambitious project with various risks

But this global synodal process is not only ambitious, it is also risky because of its different phases — local, national/continental, and central — that will highlight the radical differences in the ecclesial and existential conditions of local Churches.

For instance, it will be curious to see what the diocesan phase of this synodal process will look like in places such as Hong Kong, China or Belarus.

Synodality requires a minimum of religious freedom (freedom to gather or to publish documents), which is currently minimal or nonexistent for Catholics in many countries.

Moreover, the coronavirus pandemic has now become a problem mostly for poor and middle-income countries. It, too, will have an impact on how some local churches are able to celebrate synods at the diocesan and national levels.

This new global synodal process also has to merge with ongoing national synodal paths that are already unfolding (Germany and Australia) or in the planning stages (Ireland and Italy).

Currently in the Catholic Church there are vastly different ideas about synodality, even among its advocates.

Is the aim to create a more pastoral and less clerical Church or is it to push for doctrinal developments on certain critical issues (such as the role of women in the Church, teaching on sexuality, etc.)?

What will the bishops do?

Cardinal Grech, in an important interview with official Vatican media, stressed that the bishops and the national episcopal conferences will play a crucial role in this process. 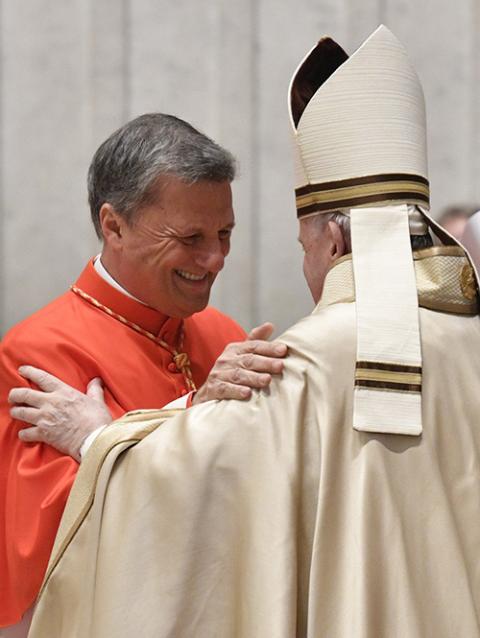 Pope Francis greets new Cardinal Mario Grech during a consistory for the creation of 13 new cardinals in St. Peter's Basilica at the Vatican Nov. 28, 2020. (CNS/Vatican Media)

By October 2021, the bishops will have to appoint persons or teams to oversee the process (particularly of consulting the People of God) at the diocesan and national levels.

We already have a good idea who the bishops are and how their national conferences operate. But we do not know who they will choose as lay collaborators and advisors, or how they plan to select them.

These appointments will give important clues about the type of synodal process the bishops have in mind.

Cardinal Grech intimated that this new effort to implement synodality actually denotes a shift from the age of John Paul II and Benedict XVI, though he did not mention the two by name.

"Perhaps in the past there has been so much insistence on the communio hierarchica that there arose the idea that unity in the Church could only be achieved by strengthening the authority of pastors," the 64-year-old cardinal said.

"In some respects, that path was in some ways necessary when after the Council various forms of dissent had appeared," he added.

Dissent does not manifest itself in organizations and movements today, but mostly in individuals who leave the Church — quietly, though often bitterly.

Being part of the ecclesial conversation

This synodal process is an invitation.

Discernment by the bishops will be the focal point, but this process will be also a discursive process – a language-process to paraphrase what Jesuit historian John O'Malley wrote about Vatican II as a "language-event".

The Church is not a parliament, and Francis has often warned against interpreting synodality as parliamentarism.

But within this ecclesial conversation persuasion will play a role. And this opens a huge problem in some Churches, such as in the United States where "money talks", as the saying goes.

The bishops will have to defend the synodal process from the never-neutral role of "independent" and militant neo-Catholic media, cyber-militias and — in a disguised, but no less dangerous way — donors and pressure groups that now controls much of the conversation in ecclesial spaces.

Catholicism simply has no experience of running synodal events at the national and global levels in an information ecosystem that is largely shaped by digital and social media. These media are beyond the control of the institutional channels run by the hierarchical Church.

This synodal process is also the restitution of the ecclesial conversation to the entire People of God. Up till now particular agendas and idiosyncratic movements have monopolized the conversation.

This new process is, in a sense, an act of rebalancing the politics that will have to have preferential options in the Church.

Without a non-perfunctory "prise de la parole" by women (to quote French Jesuit Michel de Certeau), this effort towards synodality will be meaningless.

This synodal process will live or die by the kind of acknowledgment it gives to the word of women, who, for far too long, have been treated as guests in their own house. This is especially true for the Catholic Church in the Western hemisphere, but not only.

This synodal process will also have to make relevant space, in both its liturgical and conversational moments, for young people — and not just for the hand-picked "churchy" types.

As Pope Francis noted in his letter to the youth four years ago: "St. Benedict urged the abbots to consult, even the young, before any important decision, because 'the Lord often reveals to the younger what is best'." (Rule of St. Benedict, III, 3) 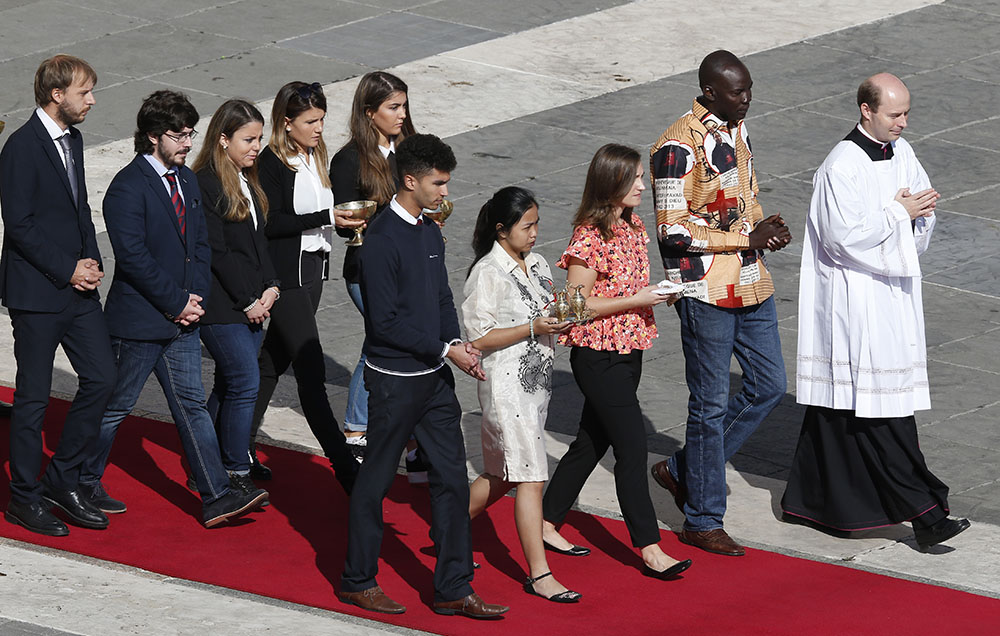 Young people carry offertory gifts to the altar as Pope Francis celebrates the opening Mass of the Synod of Bishops on young people at the Vatican Oct. 3, 2018. (CNS/Paul Haring)

The Vatican and the world's bishops will have to manage a variety of expectations. Some expect this synodal process to be like a nice gathering for small Church talk, while others see it as the opportunity to raise epochal issues — something like a Vatican III.

This synodal process will likely be neither.

But, at the same time, the Church's leaders must not immediately dash expectations, either. This synodal process will have to defeat the cynicism and bitterness that sadly defaces some of our ecclesial conversations today.

The concept of synodality as "the people walking together" is essentially the opposite of the "ecclesioclastic" rage where the Catholic Church seems to be blamed for everything and anything.

But this synodal process could go sideways very quickly and, in some local Churches, become a means for a faction to wield reactionary power.

One would search in vain for the word "synodality" (let alone the concept) in the teachings of Francis' predecessors.

What is about to start has its roots in the Second Vatican Council and could become the most important ecclesial event in global Catholicism since Vatican II.

The biggest risk of this synodal process is that it could reinforce the resentment of many Catholics against an institutional Church that continually invites people but never really lets them in.

However, this is an unprecedented invitation coming from the pope, and it should be received with hope.