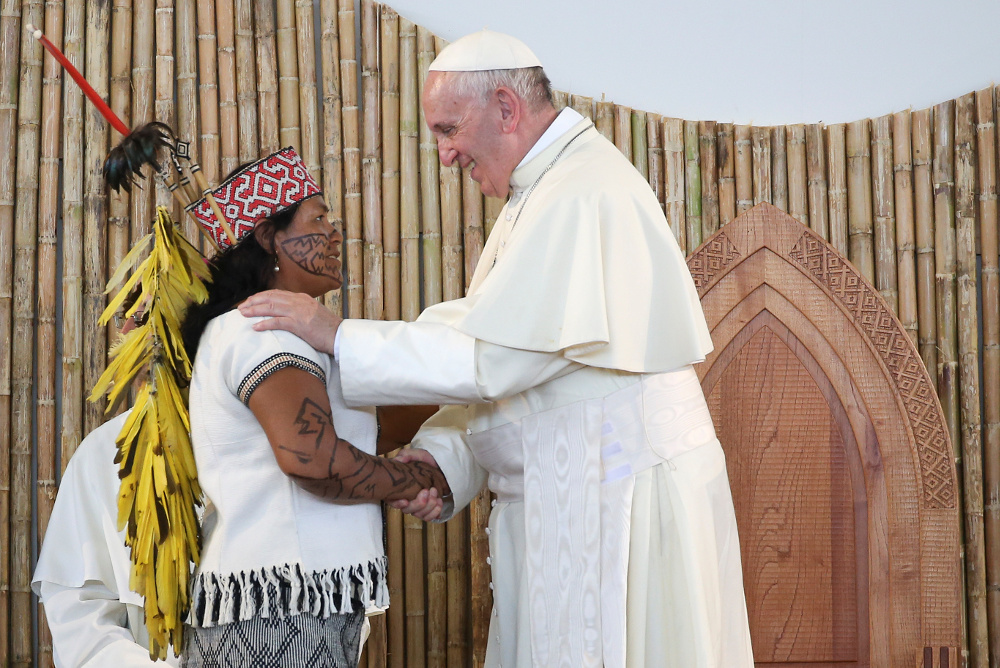 Pope Francis is greeted by a member of an indigenous group from the Amazon region during a meeting at the Coliseo Regional Madre de Dios in Puerto Maldonado, Peru, Jan.19, 2018. (CNS/Reuters/Alessandro Bianchi)

The upcoming Synod of Bishops on the Amazon is an "urgent" gathering, not of scientists and politicians, but for the church whose main focus in discussions will be evangelization, Pope Francis said in a new interview.

However, the importance of the Amazon region's biodiversity and current threats it faces also will be addressed because "together with the oceans, (the Amazon) contributes decisively to the survival of the planet. Much of the oxygen we breathe comes from there. That's why deforestation means killing humanity," he said.

The pope also talked about the dangers of surging nationalism and isolationist sentiments, saying, "I am worried because you hear speeches that resemble those by Hitler in 1934. 'Us first, We ... We ....' "

Such thinking, he said, "is frightening."

The pope's comments came in an interview posted Aug. 9 by Vatican Insider, the online news supplement to the Italian newspaper La Stampa.

Asked about the dangers of "sovereignism" or nationalism, the pope said it represented an attitude of "isolation" and closure.

"A country must be sovereign, but not closed" inside itself, he said.

National sovereignty, he said, "must be defended, but relations with other countries, with the European community, must also be protected and promoted."

"Sovereignism," on the other hand, he continued, is something that goes "too far" and "always ends badly — it leads to war."

When asked about populism, the pope said it was one thing for people to be able to express their concerns, but quite another "to impose a populist attitude on the people."

"The people are sovereign," with their own way of thinking, feeling, judging and expressing themselves, he said, "while populism leads to forms of sovereignism. That suffix, '-ism,' is never good."

Asked about "the right path to take when it comes to migrants," the pope said, "First and foremost, never neglect the most important right of all: the right to life."

"Immigrants come above all to escape from war or hunger, from the Middle East and Africa," he said.

When it comes to war, "we must make an effort and fight for peace" as well as invest in Africa in ways that help the people there "resolve their problems and thus stop the migration flows."

"First, to receive, which is also a Christian, Gospel duty. Doors should be opened, not closed. Second, to accompany. Third, to promote. Fourth, to integrate" the newcomers in the host communities, he said.

"At the same time, governments must think and act prudently, which is a virtue of government. Those in charge are called to think about how many migrants can be taken in."

If that threshold is reached, "the situation can be resolved through dialogue with other countries" because some countries need people, especially for working in agriculture or for reviving their economy and breathing new life into "half-empty towns" because of low birthrates, he said.

Among the environmental issues the pope is concerned about, the one that "has shocked me the most," he said, is the way resources are increasingly being consumed faster than they can be regenerated.

"It's very serious. It's a global emergency," he said, highlighting that "Earth Overshoot Day" fell this year on July 29 — the day when resource consumption goes into "debt" because the annual demand on nature exceeds what the earth can regenerate in that year.

The seriousness of the problem means "ours will be an urgent synod. But beware: a synod is not a meeting of scientists or politicians. It is not a parliament; it is something else," he said.

The synod "is born" from the church "and will have an evangelizing mission and dimension. It will be a work of communion guided by the Holy Spirit," the pope said.

Francis was asked whether the possibility of ordaining older, married men to minister in remote areas would be one of the main topics of discussion. The pope replied, "Absolutely not. It is simply one number" in the working document.

One sub-item in a list of suggestions for ways to create appropriate and needed ministries said, "Affirming that celibacy is a gift for the church, it is requested that, for the most remote areas of the region, the possibility of priestly ordination be studied for older people, preferably indigenous, respected and accepted by their community, even if they have an existing and stable family, in order to ensure availability of the Sacraments that accompany and sustain the Christian life."

When it comes to the main purpose and aim of the synod, Francis said, "the important thing will be the ministries of evangelization and the different ways of evangelizing."

In a question regarding ecological concerns and what stands in the way of safeguarding the Amazon, the pope said, "The threat to the lives of the people and the land derives from the economic and political interests of society's dominant sectors."

When asked what policymakers should do, the pope said they should rid themselves of all complicit and corrupt practices.

"They must take concrete responsibility, for example on the issue of open-cast mines, which are poisoning water and causing so many diseases. Then there is the issue of fertilizers," he added.

When asked what he feared most concerning the planet, he said, "The disappearance of biodiversity, new deadly diseases" and the kind of loss and "devastation of nature that can lead to the death of humanity."

He praised the increased awareness and movements among young people, such as Greta Thunberg, the Swedish teenager whose #FridaysForFuture campaign asks students to hold a strike to demand swift action on climate change. Francis had met the 16-year-old environmental activist at a weekly general audience in St. Peter's Square in April.

The pope said the big and small things people can do each day "does have an impact" because change relies on real, concrete action. Also, people engaging in more environmentally responsible behavior "creates and spreads the culture of not polluting creation."