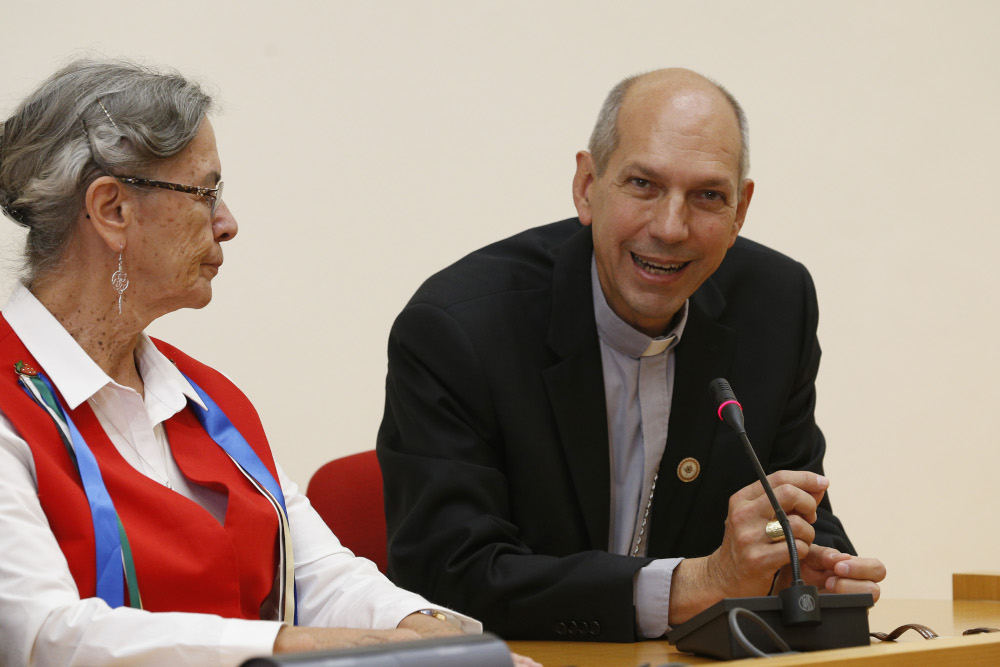 Archbishop Donald Bolen of Regina, Saskatchewan, speaks at a news conference with indigenous leaders from North America in Rome Oct. 17, 2019. Members of the delegation spoke about their own challenges and connections to indigenous people from South America who are meeting at the Synod of Bishops for the Amazon. At left is Sr. Priscilla Solomon, a member of the Ojibway people and of the Sisters of St. Joseph of Sault Ste. Marie. (CNS photo/Paul Haring

As the Synod of Bishops for the Amazon heard pleas to defend the rights of the region's indigenous people and of the land they hold sacred, indigenous leaders from Canada and the United States came to Rome to support them.

Accompanied by representatives of their nations' bishops' conferences, the North Americans said Oct. 17 that the struggle for justice, for recognition of territorial rights and for the defense of the Earth unite the indigenous peoples of North, Central and South America.

Sr. Priscilla Solomon, an Ojibway and a Sister of St. Joseph Sault Ste. Marie from Canada, said the indigenous peoples of the Americas "have a very similar kind of spirituality, vision, values that teach us that everything is connected: not only people, human beings, but we are part of land. The land is us. The water is us."

Colonization is also a common experience, she said, and one that has left members of the First Nations and Native Americans impoverished, both materially and culturally since their languages, customs and spirituality often were suppressed.

Archbishop Donald Bolen of Regina, Saskatchewan, who accompanied the group, said one task of the delegation was to look at the synod's "implications for our homelands," specifically as regards the treatment of native peoples and the ecological challenges present in North America.

But also, he said, "How are we impacted by what is happening in the Amazon" and "How are we implicated," especially in ties to or outright ownership of the mining and other companies extracting resources, polluting the land and waters and leaving entire populations deeper in poverty.

Rita Means, a longtime activist and representative on the tribal council of the Rosebud Sioux Tribe in South Dakota, told reporters that as "a mother and grandmother," she feels driven to work for justice for her people and the protection of the Earth.

Like the Amazonian indigenous trying to protect their lands from the activity of various extractive industries like mining and logging, she said, the Lakota Sioux and others are fighting the encroachment on their lands of oil pipelines.

"Some of these extractive industries are very destructive to our homeland," she said. "Again, as a mother and grandmother, I guess I find that particularly painful."

She and her people have been "nourishing that 'turtle continent' (Earth) for many centuries and to see it being attacked in such a vicious and destructive way really tears at my heart," Means said. "The Earth is crying for our assistance and this is one call that we cannot fail to answer."

Rodney Bordeaux, president of the Rosebud Sioux Tribe, said he wanted to show his people's solidarity for the Amazonian indigenous, who are experiencing "what happened to us 100-120 years ago" with people trying to steal their land to extract resources. For the Lakota, he said, "there was gold in the hills and they just stole our land."

Solomon said she does not believe the Catholic Church should try to convert indigenous peoples to Christianity, "but where there is openness to knowing Christ and the teachings of the church, the church needs to be ready to offer that."

Bordeaux said the Bible presents Jesus as one who got involved in the lives of the people he encountered, so Christians should ask themselves "What would Jesus do today? Would he stand aside, quiet? I think we know the answer and the church knows the answer."