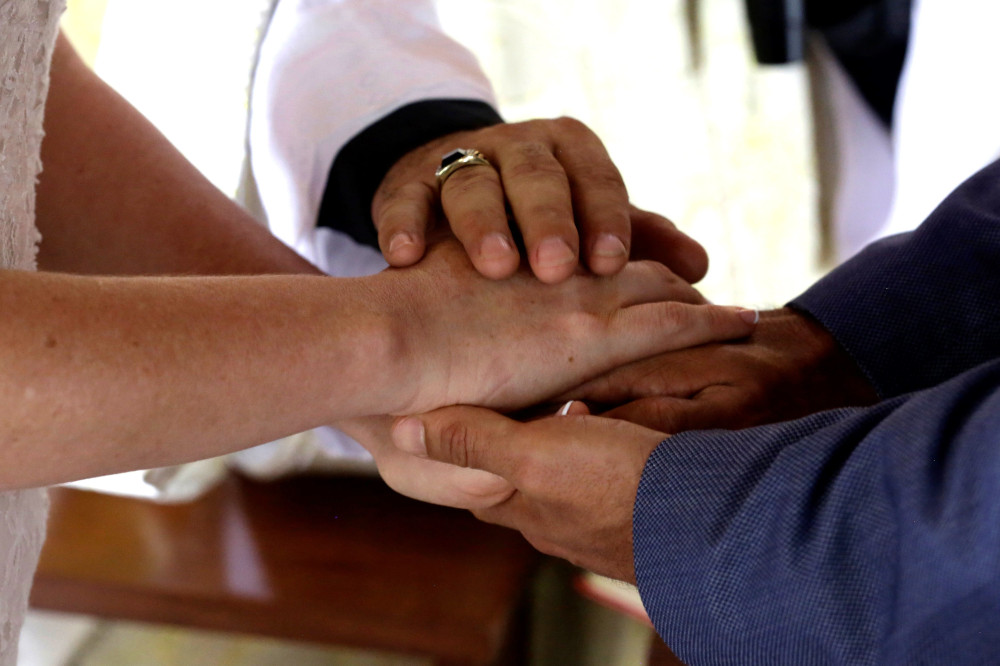 A priest blesses a couple during their wedding ceremony. The Vatican's Statistical Yearbook of the Church shows bishops and dioceses are implementing Pope Francis' 2015 reforms of the marriage annulment process, making it quicker and, in many cases, less expensive. (CNS/Reuters/Juan Carlos Ulate)

Catholic bishops and diocesan tribunals are making steady progress in implementing Pope Francis' reforms to make the annulment process quicker, but it is taking longer to achieve the pope's goal of making the process less expensive for couples.

The proof is in the Statistical Yearbook of the Church, a 512-page tome of tables and graphs compiled and published by the Central Statistics Office of the Church, which is part of the Vatican Secretariat of State.

Of course, the data cannot measure the success of Francis' chief aim in reforming the process: to reaffirm the indissolubility of marriage while offering pastoral care, mercy and a welcoming hand to people whose broken unions were defective from the beginning.

In his 2015 documents reforming the process — "Mitis Iudex Dominus Iesus" ("The Lord Jesus, the Gentle Judge") for the Latin-rite church and "Mitis et misericors Iesus," ("The Meek and Merciful Jesus") for the Eastern Catholic churches — Francis asked that "with due regard for the just compensation of tribunal employees," the process would be free of charge to the petitioning couples.

The most recent Statistical Yearbook, reporting data as of Dec. 31, 2018, said that of the 56,780 "cases for the declaration of nullity" handled globally, just over 32% were handled at no charge to the petitioners. In just over 20% of the cases, petitioners were asked to cover some of the costs, but in almost 48% of the cases, the petitioner paid in full.

The tribunals of some countries that handled fewer than 200 cases in 2018 dealt with all of them for free; those countries include Vietnam, Myanmar, Burundi, Kenya, Senegal and Zambia.

In the United States, where many dioceses began offering the process at no cost even before Francis' election, the Statistical Yearbook said 62% of the cases handled in 2018 were done gratis. In Canada, almost 45% were done without fees; in Australia, 39% were free; but in Italy, only 15% were at no cost to the petitioners.

In Italy, before Francis' reforms were announced, every diocese belonged to a regional tribunal, and the Italian bishops' conference set the price for the process. While some dioceses have set up their own marriage tribunals now, a network of interdiocesan tribunals still exists and the basic cost for a case there is 525 euros (about $622). However, all the tribunals have forms online for requesting reductions based on need.

As for Francis' other aims, Fr. Giorgio Giovanelli, a professor of canon law at Rome's Pontifical Lateran University and judicial vicar for the Diocese of Fano, said the cases clearly move more quickly now — a normal process may take a year to 18 months instead of "a few years," he said.

But, even more, he said, "I've seen a reawakening of the desire of couples to live in full harmony with the church." 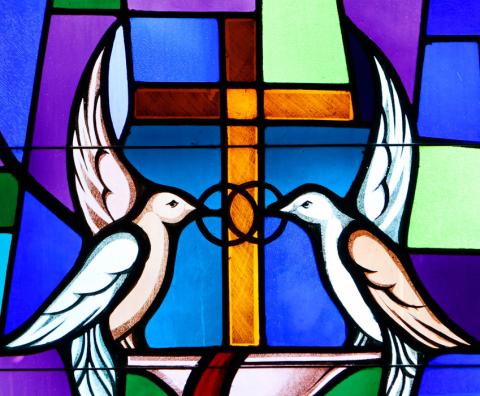 Doves and interlocking wedding bands symbolizing the sacrament of marriage are depicted in a stained-glass window. The Vatican's Statistical Yearbook of the Church shows bishops and dioceses are implementing Pope Francis' 2015 reforms of the marriage annulment process, making it quicker and, in many cases, less expensive. (CNS/Gregory A. Shemitz)

"Just last week I was listening to a couple — two elderly people who had been married in the church to other people — who now say, 'We want to be in full communion with the church. We know our current situation isn't right; we want to see what can be done.'"

"A few years ago, this would not have happened," Giovanelli said. "If nothing else, what Pope Francis has done has caused people to question, to seek information — he's raising consciences."

Immediately after the pope's reforms were announced, he wrote, "our tribunals, especially in the big cities, faced an influx of people who asked that we examine their matrimonial positions as soon as possible because, they said, the pope has changed the law in this direction."

But many of the tribunals did not have the personnel to respond so quickly, he wrote in an article in 2019.

Now, he told CNS Sept. 16, "the situation has calmed down, but the number of couples turning to the tribunals continues to grow, also because they know the process will not be so long. Little by little, the reform is yielding positive fruit."

The shortest process envisioned by Francis' reform is what his documents call the "Briefer Matrimonial Process before the Bishop," which can be used "in those cases where the alleged nullity of marriage is supported by particularly clear arguments."

Giovanelli said it makes sense that the number is so low; the process is designed for very specific, very clear circumstances where "the nullity is obvious, known and easily verifiable."

A more significant reason for speedier resolutions of marriage cases is that Francis dropped the requirement that every declaration of nullity automatically be appealed. While one of the individuals involved and the "defender of the bond" — the church official who defends the validity of the marriage — still have a right to appeal, it is not obligatory.

Giovanelli coordinates a new working group called "Jurists for Pastoral Care," which brings together professors and practitioners of canon law to study, brainstorm and, especially, to serve as consultants to bishops and dioceses.

He said he hopes ongoing efforts to implement the pope's reforms would lead to more investment in training canon lawyers, especially among laypeople; and would promote a tighter bond between legal precision and pastoral care.

"It is technical work," he said, but it directly impacts the lives of Catholics, many of whom have "stories of suffering that has gone on for years."