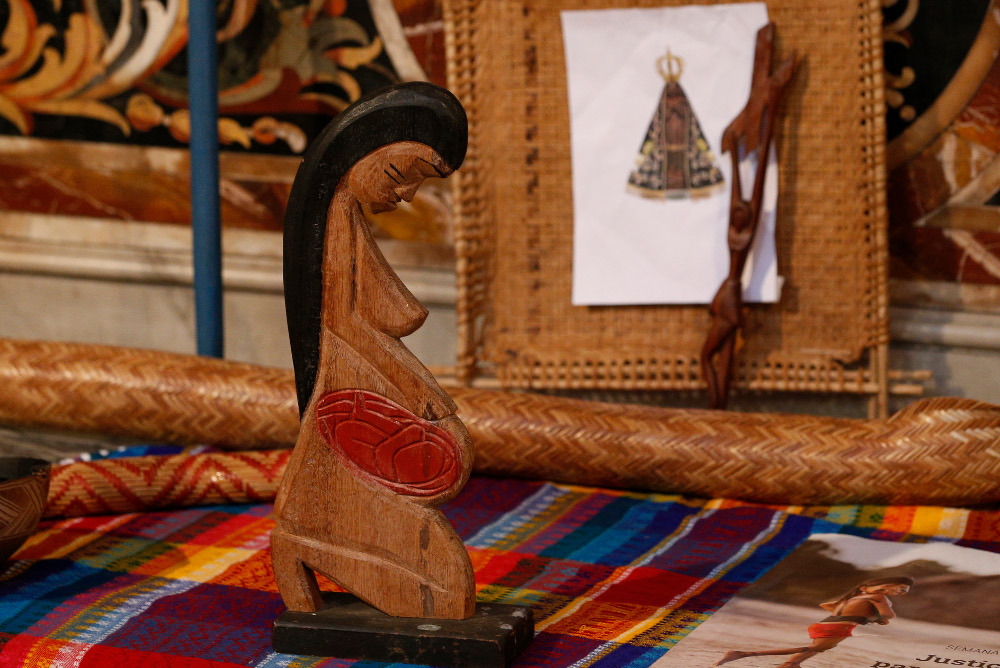 A wooden statue of a pregnant woman is pictured in the Church of St. Mary in Traspontina as part of exhibits on the Amazon region during the Synod of Bishops for the Amazon in Rome Oct. 18. (CNS/Paul Haring)

Pope Francis apologized for the vandalism of indigenous statues brought to the Amazon synod that were stolen this week from a Catholic Church and later tossed into the Tiber River.

"As the bishop of the diocese [of Rome] I ask forgiveness to anyone who was offended," Francis said Oct. 25, referencing the incident involving four wooden statues depicting a pregnant woman.

The comments came as the pope opened the synod's afternoon session inside the Paul VI Hall.  NCR was part of a media pool invited into the synod hall to observe the opening prayer. NCR recorded a portion of the pope's comments as the journalists were being escorted from the hall after the prayer, as has been the procedure followed throughout the synod.

The pope is also heard referring to how the statue incident had become a sensation in the press. Catholic News Service tweeted that Francis also noted that the statues were present at various side events to the synod "without an idolatrous intention."

The pope's comments were the second time during the three-week synod that he has denounced critics attacking elements of indigenous Amazonian cultures. At the start of the synod, he addressed a sarcastic comment about an indigenous man wearing a feathered headdress at the opening Mass, saying it "pained" him. The pope questioned how the head coverings were any different from the three-pointed birettas worn by cardinals in the church.

The 2-foot-tall wooden statues have been described as depicting "Our Lady of the Amazon"; critics, primarily traditional Catholics, had said it is an image of the Incan goddess Pachamama. They called it an idolatrous pagan symbol and referred to its presence at the Vatican as scandalous.

On Oct. 21, video surfaced on far-right Catholic websites LifeSite News and Church Militant showing two men stealing the statues from Santa Maria Traspontina Church and later placing them on the nearby St. Angelo Bride before knocking each into the river below. The statues had been on display at the church, a short walk away from St. Peter's Square, as part of an exhibition related to the synod.

The Vatican had previously referred to the theft as "clearly a stunt" and "against the spirit of dialogue."

The statues stirred up strong reaction on social media after they first appeared at a ceremony in the Vatican Gardens Oct. 4 to mark the feast of St. Francis of Assisi. The pope was in attendance and participated in a tree planting.

The theft has garnered much attention in the final week of the synod. The gathering is organized around the church's ministry in the nine-country Amazon Basin and how it can address issues regarding climate change, deforestation and indigenous rights threatening the region.

Following reports on the matter by NCR and other outlets, the Vatican released a full transcript of the pope’s remarks later Oct. 25.

According to that transcript, the pontiff also told the 185 synod prelates that the statues had been found in the Tiber undamaged by the "Carabinieri", the Italian military police. Francis added that its commander informed the Vatican the force would follow the direction of the synod fathers regarding any future initiatives planned for the statues. The commander suggested possibly making them available to display during the Mass closing the synod in St. Peter’s Basilica Oct. 27, should the bishops desire.

Editor's note: This story was updated at 4 p.m. CST Oct. 25 to include reporting about the Vatican's release of the full transcript of Francis' remarks. It was later updated at 2:55 a.m. CST to clarify comments from the transcript attributed to the commander of the "Carabinieri," the Italian miltary police.

Read this next: Editorial: Desecration of Amazonian mother statues was a racist act