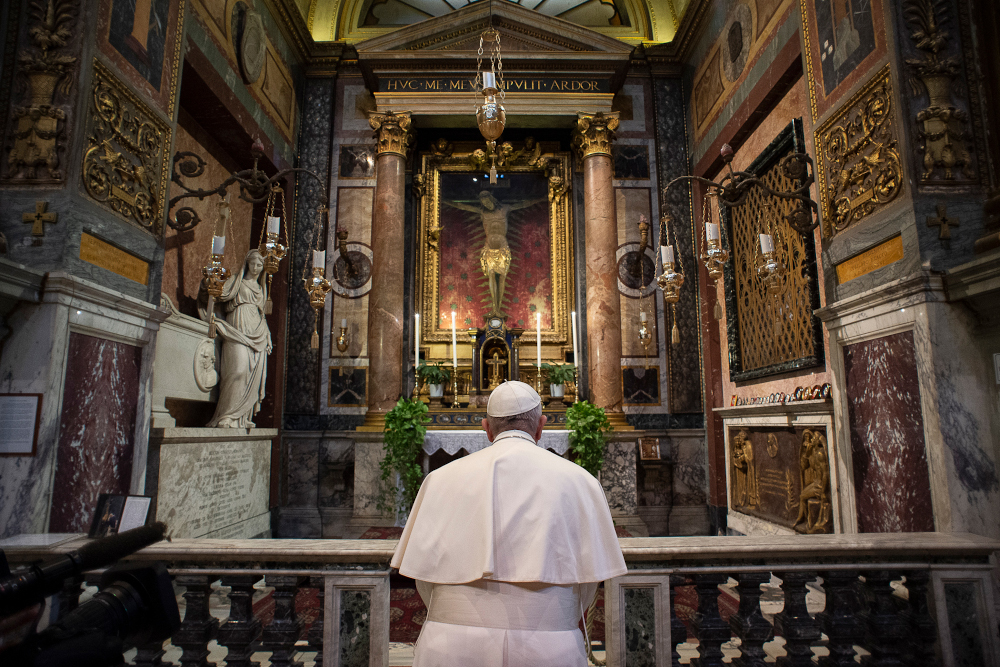 Pope Francis prays in front of a crucifix at the Church of St. Marcellus in Rome March 15, 2020. The crucifix was carried through Rome in 1522 during the "Great Plague." The pope prayed as coronavirus deaths in Italy peaked at 368 in a 24-hour period, bringing the total number of deaths to 1,809 out of 24,747 cases. (CNS/Vatican Media)

With Italy on lockdown and Rome streets almost deserted, Pope Francis left the Vatican March 15 in a mini-pilgrimage to an icon and to a crucifix associated with miraculous interventions to save the city and its people.

The icon is "Salus Populi Romani" (health of the Roman people) in the Basilica of St. Mary Major and the crucifix, which Romans call the "Miraculous Crucifix," is housed in the Church of St. Marcellus on Via del Corso, a usually crowded street of shops leading to the central Piazza Venezia.

Shortly after 4 p.m., the Vatican said, Francis was driven, with a small police escort, to the Basilica of St. Mary Major. Joined by Polish Cardinal Stanislaw Rylko, archpriest of the basilica, he entered the Pauline Chapel where the "Salus Populi Romani" icon looks down from high above the altar.

The pope laid a bouquet of yellow and white flowers on the altar and sat in prayer in front of the chapel's famous icon of Mary and the child Jesus.

Francis prays before the icon often, including before and after every trip he makes abroad. In the late 1500s, St. Francis Borgia, the third superior general of the Jesuit order, started giving a copy of the icon to every Jesuit going out on mission. According to Cardinal Rylko, Jesuit Father Matteo Ricci carried his to China and gave it to the emperor.

But, long before that, the image was connected to the faith of the Roman people in times of dire health emergencies. According to legend, late in the 6th century Pope Gregory I had the icon carried through the streets of Rome in prayer that the Black Plague would end, and in 1837, Pope Gregory XVI prayed before the image for an end to a devastating cholera outbreak.

Leading the recitation of the rosary in 2013 at St. Mary Major, Francis said, "Mary is a mother, and a mother worries above all about the health of her children; she knows how to care for them always with great and tender love. Our Lady guards our health."

The crucifix at the church of St. Marcellus is a 15th-century wooden crucifix that survived a fire in 1519 that burned to the ground the original church on the site. The morning after the fire, while the ruins were still smoldering, people found the crucifix intact. Some Catholics began gathering every Friday evening to pray together, eventually forming the Confraternity of the Most Holy Crucifix.

In 1522, in the midst of the great plague in Rome, the faithful carried the crucifix in procession throughout the city for 16 days. According to an article on the website of TV2000, the Italian bishops' television station, devotion to the crucifix led the city's people to defy "the authorities, who for fear that the contagion would spread further, had banned all gatherings of people."

The situation was similar when the pope, stopping his car on the Via del Corso, made a point of walking to the church "as in pilgrimage," said Matteo Bruni, director of the Vatican press office.

"With his prayer, the Holy Father invoked the end of the pandemic striking Italy and the world, imploring healing for the many people who are sick, remembering the many victims and asking that their family and friends find consolation and comfort," Bruni said.

The pope, he added, also prayed as he did that morning at Mass, for health care workers, doctors, nurses and all those who are still working in Italy so that necessary services are guaranteed even amid the lockdown.