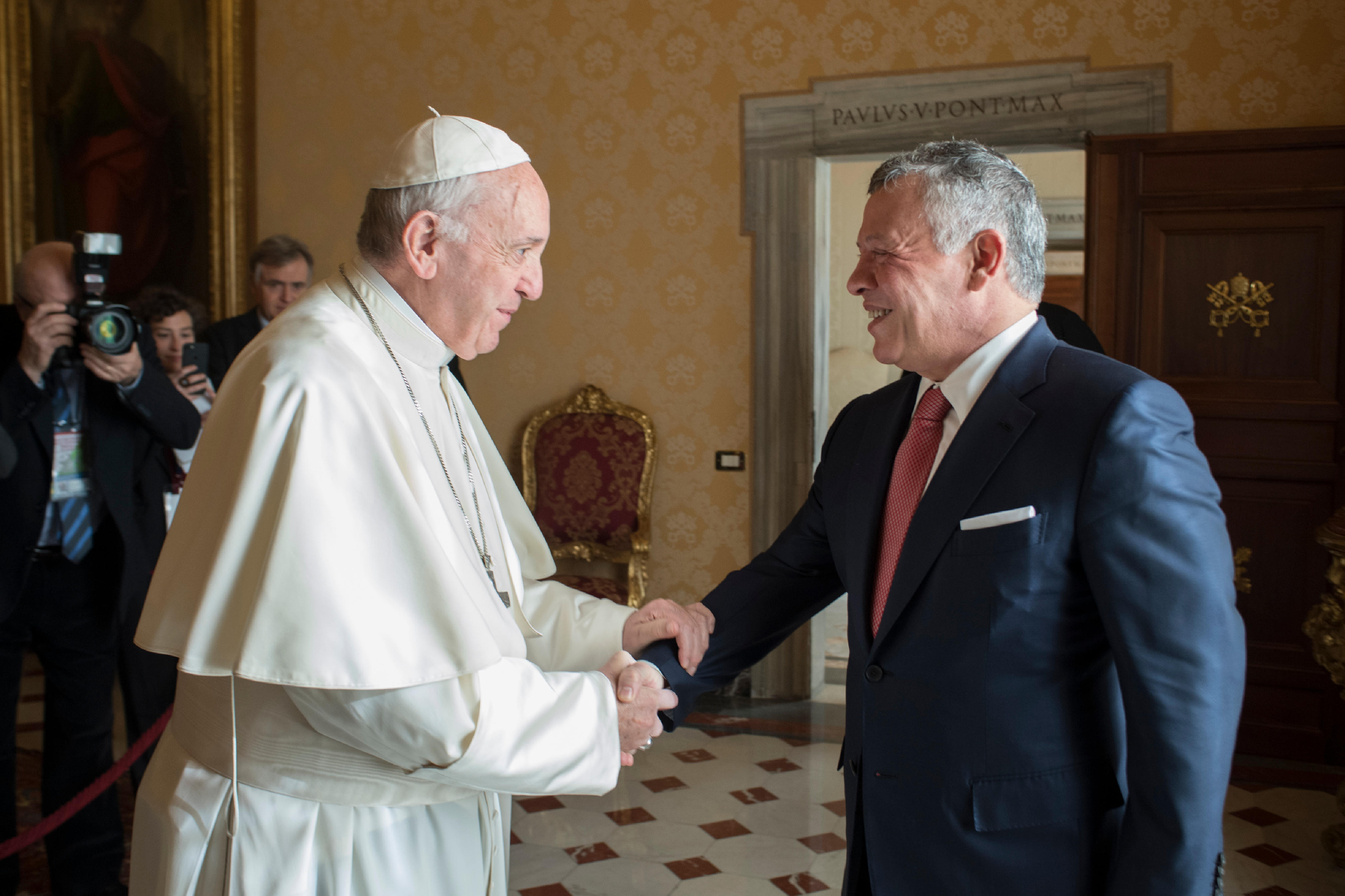 According to the Vatican, "the cordial conversations focused above all on the theme of the promotion of peace and stability in the Mideast, with particular reference to the question of Jerusalem and the role of the Hashemite Sovereign (the king of Jordan) as custodian of the holy places."

The pope welcomed the king, who was accompanied by Prince Ghazi bin Muhammad bin Talal, in the library of the Apostolic Palace Dec. 19.

Abdullah greeted the pope as "My dear friend and brother."

With the help of an interpreter, Francis spent 20 minutes speaking alone with Abdullah and Prince Ghazi, an adviser to the king on religious and cultural affairs. After their meeting, the king and his delegation met with Cardinal Pietro Parolin, Vatican secretary of state, and Archbishop Paul Gallagher, Vatican foreign minister.

The pope and Abdullah, the Vatican statement said, renewed their commitment to "encourage negotiations as well as promoting interreligious dialogue."

President Trump announced his decision Dec. 6 to move the U.S. embassy to Jerusalem from Tel Aviv, fulfilling a promise he made during his presidential campaign.

The announcement sparked anti-U.S. protests throughout Asia and the Middle East and drew warnings from Middle Eastern and European leaders that overturning the United States' long-standing policy would further complicate peace negotiations.

Abdullah was among several Middle Eastern leaders informed by Trump of his decision prior to the official announcement.

According to Reuters, the Jordanian king warned Trump that such a declaration would "have dangerous repercussions" and undermine any peaceful settlement between Israel and Palestine.

"Jerusalem is the key to achieving peace and stability in the region and the world," said a statement Dec. 5 from the Jordanian palace.

The Vatican supports a "two-state solution" for the Holy Land, with independence, recognition and secure borders for both Israel and Palestine. It has also called for a special status for Jerusalem, particularly its Old City, in order to protect and guarantee access to the holy sites of Judaism, Christianity and Islam.

After the closed-door meeting, Abdullah introduced his delegation to the pope before exchanging gifts with him.

Among the gifts was a painting of the Dome of the Rock and the Church of the Holy Sepulcher, the Jerusalem holy sites for Muslims and Christians, respectively.

Jordan is the custodian of Muslim and Christian holy sites in Jerusalem under a 1994 peace treaty with Israel, one of only two treaties Israel has with Arab countries.

"The importance of helping Christians remain in the Mideast was brought up and the positive contributions that they bring to the societies of the region, of which they are an integral part," the Vatican said.