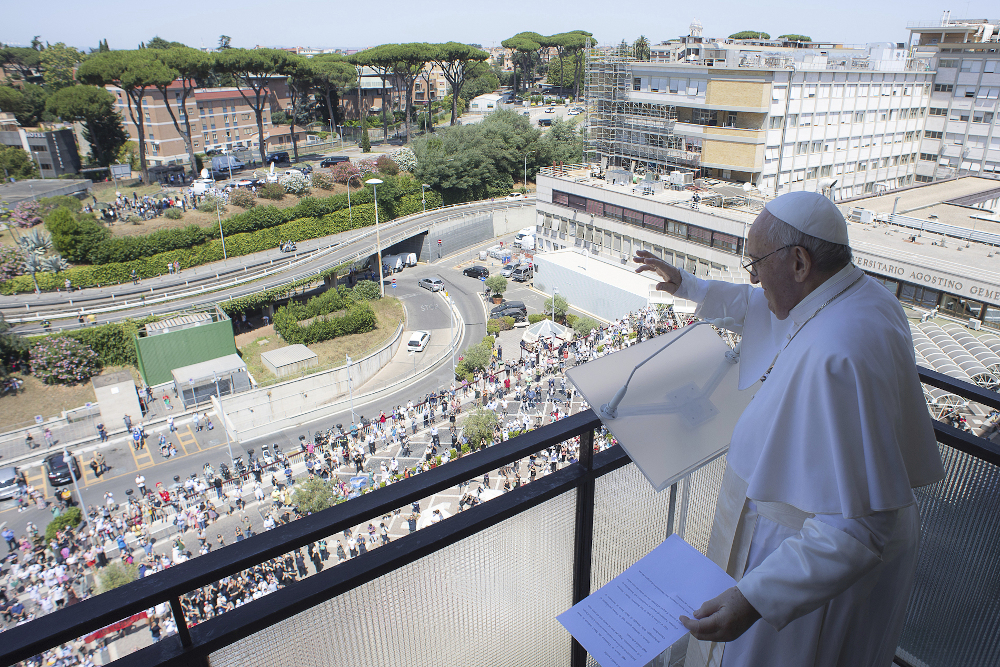 Pope Francis appears at a balcony of the Agostino Gemelli Polyclinic in Rome, Sunday, July 11, 2021. (Vatican Media via AP)

Pope Francis will spend a few more days in the hospital following his July 4 intestinal surgery to "optimize" recovery and rehabilitation treatment and therapy, the Vatican said July 12.

The Vatican had originally said Francis could be released from Rome’s Gemelli Polyclinic by the end of last week. In its latest update July 12, the Vatican said he had completed his post-operative treatment but "would remain a few more days to optimize medical and rehabilitation therapy."

Surgeons removed half of Francis’ colon on July 4 for what doctors said was a severe narrowing of the large intestine.

The 84-year-old appeared for the first time in public since the surgery on July 11, looking in good form as he delivered his weekly prayer from the 10th floor hospital balcony. He used the occasion to call for free health care for all.

Francis scheduled the surgery for July, when he typically suspends all public and private audiences and takes some time to rest. Even as he recovers, plans are going ahead for an autumn of travel, including confirmation July 12 from the Scottish church that Francis hopes to make a quick trip to Glasgow to attend the COP26 climate conference in November.

In a statement, a spokesman for the Scottish Bishops Conference said the bishops had written to Francis to assure him of a warm welcome in Scotland and were "delighted to hear that he does hope to attend and would be glad to meet with them in Glasgow."

The climate conference is due to take place Oct. 31-Nov. 12, but Francis is only expected to go "for a very short time," the bishops said, explaining that his visit consequently wouldn't include a full program of pastoral gatherings that are normally part of a foreign papal trip.

The Vatican hasn't confirmed Francis' participation in the Glasgow gathering, though Francis has made environmental concerns a cornerstone of his papacy. The Holy See has confirmed he plans to visit Hungary and Slovakia in September, the only other confirmed trip on his agenda so far this year.

Francis had reason for high spirits on July 12: His native Argentina beat Brazil 1-0 to win the Copa America, and his adopted Italy won the European Championship after prevailing over England in a penalty shootout late July 11.

The Vatican said the pope, who grew up as a fan of Buenos Aires club San Lorenzo, "shared the joy" for the victories of both national teams and repeated his belief about the importance of sporting values and the need to accept any outcome, including loss.

The Vatican statement quoted Francis as saying "only this way, confronting the difficulties of life, you can always put yourself in play, fighting without giving up, with hope and faith."