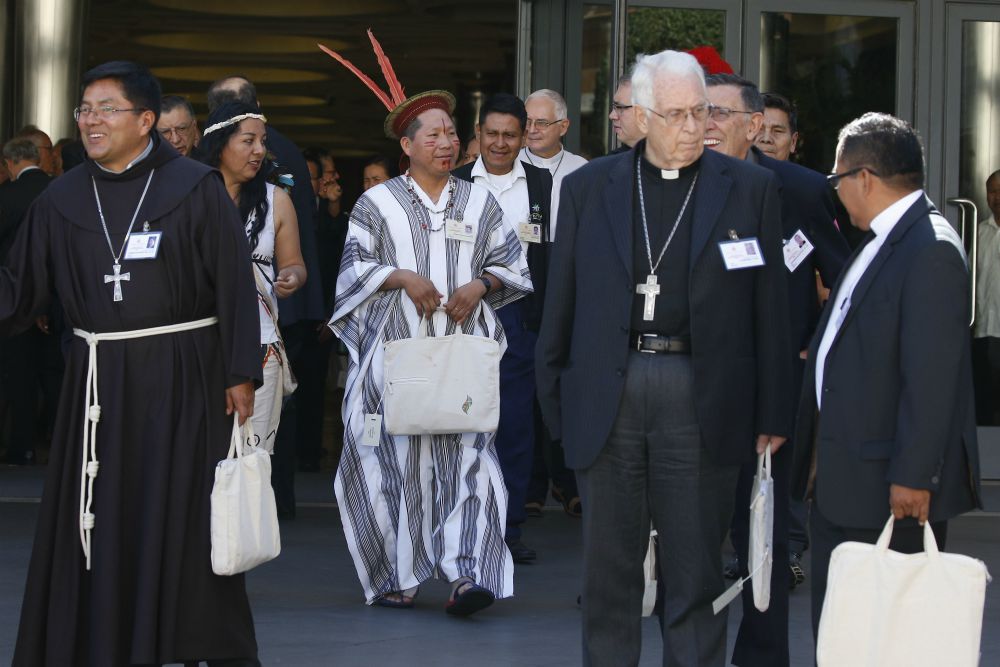 Participants leave a session of the Synod of Bishops for the Amazon at the Vatican Oct. 9. (CNS/Paul Haring)

If the prelates attending the Vatican's Synod of Bishops for the Amazon ask that Pope Francis allow the ordination of married men to address a lack of Catholic ministers across the nine-nation region, the path for implementing such a proposal is fairly straightforward, say four eminent canon lawyers.

Although the canonists have slightly different ideas about the concrete method the pope could use to allow for married priests on a regional basis, they agree that the way forward is relatively easy, as celibacy is only a practice of the church and not a revealed dogma.

Among the two main possibilities: Francis could issue new norms allowing bishops in the region to deviate from the church canon requiring clerics to remain celibate, or could invite the bishops to make appeal to the Vatican for special permission on a case-by-case basis.

"Celibacy is a discipline of the church," Nicholas Cafardi, a civil and canon lawyer who has advised bishops and dioceses on canonical issues for decades, told NCR. "Disciplines exist by creation of the law, so if the law were to be changed, the discipline would change."

"Pope Francis could, since he is the sole legislator for the universal church … allow married priests in the Western church, either across the board, or in limited areas and in limited situations," said Cafardi.

"Celibacy is not demanded of the priesthood by its nature," said Euart, now executive director of the Resource Center for Religious Institutes. "The practice of a married clergy existed in the early church."

The church law in question is Canon 277, which states that Catholic clerics are "obliged to observe perfect and perpetual continence for the sake of the kingdom of heaven and therefore are bound to celibacy."

Cafardi and Euart both suggested that Francis could issue norms allowing bishops in the Amazon countries to deviate from that canon in choosing which candidates to ordain to the priesthood.

Oblate Fr. Francis Morrisey, a former president of the Canadian Canon Law Society who has advised numerous Vatican offices and local bishops' conferences, thought it more likely that the pontiff would invite bishops to make special appeal to the Vatican when they find a married man they would like to ordain.

"I'm going to presume they wouldn't touch the canons as such, but use an individual indult," said Morrisey, using a canonical term for obtaining special permission to do something normally not permitted by canon law.

Fr. James Coriden, a canon lawyer who previously taught at the now closed Washington Theological Union, agreed with Morrisey. "I assume it would be treated (and controlled) like that," he said. "One case at a time. When a bishop in the Amazon petitions Rome for an exception, then it would be granted."

The possibility of ordaining married men to meet the sacramental needs of the Amazon region has emerged as a key topic of the Oct. 6-27 synod. Its lead organizer, retired Brazilian Cardinal Cláudio Hummes, even brought up the issue by name in his Oct. 7 address opening the business of the gathering.

There are 184 bishops and priests and one religious brother attending the Amazon synod as voting members. Austro-Brazilian Bishop Erwin Krautler estimated Oct. 9 that about two-thirds of those taking part are in favor of ordaining married men.

In terms of the timeline for how a change in practice for the Amazon region might come about, several of the canonists mentioned the possibility of the synod's final document, expected to come out Oct. 26, making a reference to a desire for bishops in the region to ordain married men.

Francis could then decide to respond to that request in his own document following the conclusion of the synod, usually released a few months afterwards and made in the form of an apostolic exhortation.

Cafardi suggested that the pontiff could simply attach some new canonical norms to that exhortation.

"That would make sense," said the canonist. "I think if it comes out of the synod that this is necessary for the pastoral care of people in the Amazon, he can simply say: 'As a result, I'm establishing these new norms.' "

Three of the canon lawyers referred to the precedent set by previous pontiffs, who made provision for married priests in other Christian denominations to become Catholic ministers while remaining married.

"It's pretty much what [Pope] Benedict did when he allowed Anglican priests to be ordained as Catholic priests even if they were already married," said Cafardi, dean emeritus of Duquesne University School of Law in Pittsburgh.

Morrisey, an emeritus canon law professor at Saint Paul University in Ottawa, brought forward a number of practical issues Francis and the Amazonian bishops would need to consider in ordaining married men, including how they would be trained, and if the church would provide financial support for them and their families.

Another issue Morrisey mentioned: Once Francis allows the Amazonian bishops to request permission to ordain married priests, prelates in other regions are likely to do so as well.

The Canadian said that the bishops in his country have been requesting permission to ordain married priests for decades, citing a special need in Canada's northern provinces, especially among their indigenous Inuit populations.

"One of the factors up there is that if somebody is not married he's not considered a stable person, building up the community," said Morrisey.

"We've never had one Eskimo [Inuit] Catholic priest. Not one," he said. "The Anglicans have had some, because they're married."