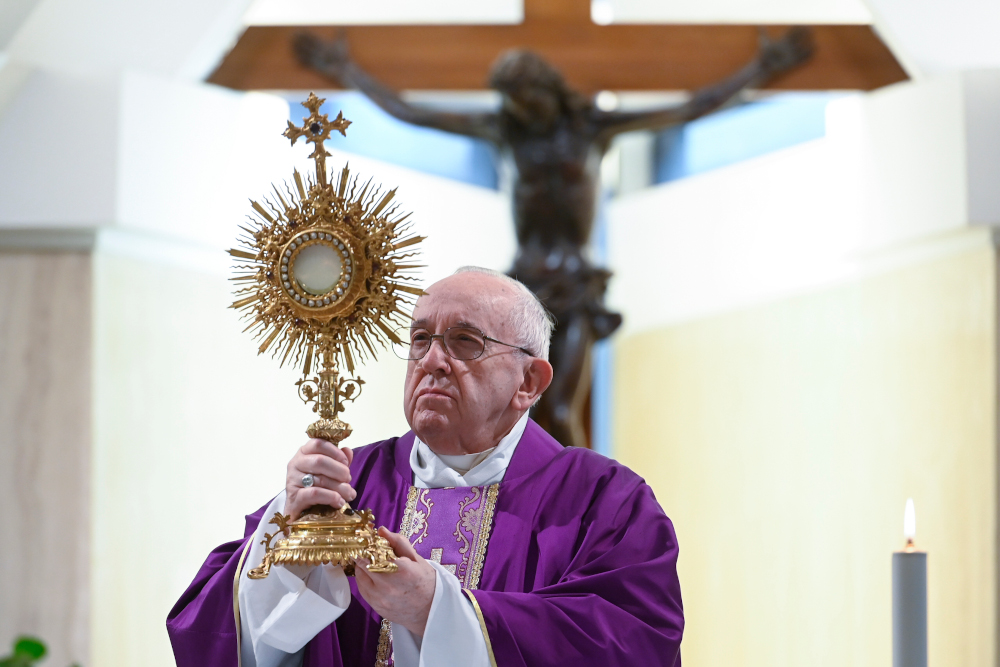 Pope Francis raises the monstrance during eucharistic adoration at the end of Mass March 26, 2020, in the chapel of his Vatican residence, the Domus Sanctae Marthae. About a dozen priests also live in the Vatican guesthouse and news reports March 25 said one of them, an Italian monsignor working in the Vatican Secretariat of State, had tested positive for COVID-19. (CNS/Vatican Media)

A 58-year-old Italian monsignor, who works in the Vatican Secretariat of State and lives in the Domus Sanctae Marthae, where Pope Francis lives, has tested positive for COVID-19 and has been hospitalized, an Italian newspaper reported March 25.

Shortly after the article was published on the website of Il Messaggero, the news was confirmed by the Vatican correspondent for America magazine, citing Vatican sources.

As of 2 p.m. March 26, the Vatican press office had not responded to requests for comment.

The articles identified the official as Msgr. Gianluca Pezzoli, a priest of the Diocese of Mantova and head of the Italian section of the Vatican Secretariat of State.

America magazine said he lives permanently in the Vatican guesthouse where Francis lives, as do another dozen priests working in various Vatican offices.

The magazine also reported that people who had been in close contact with Pezzoli have been tested for the virus. "It is presumed that they are in isolation, though the Vatican has not confirmed this," the magazine said.

The Vatican press office had said that as of March 24, four people in the Vatican had tested positive for the coronavirus. The first, confirmed by the Vatican March 6, was a priest from Bergamo who had a routine pre-employment exam at the Vatican health clinic. After he was discovered with symptoms, the clinic was closed temporarily for special cleaning, and the five people the priest came into contact with were put under a preventive quarantine.

There were reports at the same time that the offices of the Secretariat of State were closed temporarily for a thorough cleaning.

The Vatican did not say when the next three people tested positive, but it said one worked in the Vatican warehouse and two worked at the Vatican Museums.

All four, the Vatican said March 24, "were placed in precautionary isolation" before their test results came back. "The isolation has already lasted more than 14 days; currently they are receiving care in Italian hospitals or in their own homes."

Both America magazine and Il Messaggero said Francis is unlikely to have had contact with Pezzoli, and, they said, the pope has been eating his meals in his room rather than the dining room since coming down with a bad cold after Ash Wednesday, Feb. 26.

While the Vatican has canceled all group meetings, Francis continues to meet with individuals each day. The Vatican's daily bulletin March 26 said the pope met separately with Archbishop Giacomo Morandi, secretary of the Congregation for the Doctrine of the Faith; Cardinal Robert Sarah, prefect of the Congregation for Divine Worship and the Sacraments; Mario Cayota Zappettini, who is ending his service as Uruguay's ambassador to the Holy See; and Marco Impagliazzo, president of the Community of Sant'Egidio.

News reports said the pope and his guests use hand sanitizer before and after the meetings.