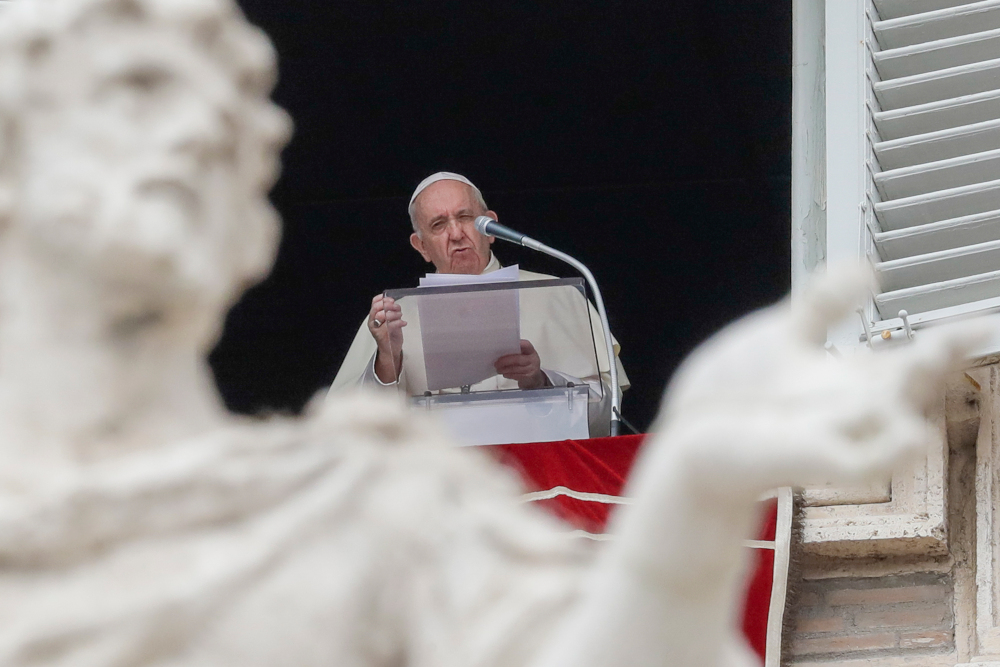 Pope Francis delivers his speech as he recites the Angelus noon prayer from the window of his studio overlooking St.Peter's Square, at the Vatican, Sunday, Aug. 30, 2020. (AP/Andrew Medichini)

I can see the headlines now: "Papal encyclical condemned as sexist."

Last month, Italian Bishop Domenico Pompili revealed that Pope Francis is preparing a new papal encyclical — the third of his papacy and his first in five years — to focus on the economic, environmental and spiritual change that is necessary to address today's modern challenges. To be released Oct. 3, the vigil of the feast of St. Francis Assisi, the encyclical will be titled "Fratelli tutti" in Italian or, strictly translated, "Brothers all."

Hopefully, the official English translation of "Fratelli tutti" will be "Brothers and sisters all," but it is sad to see the church continue to suffer from self-inflicted wounds. It would have been so easy to have titled the encyclical "Fratelli e sorelle tutti." The concern about language in the title will increase the focus on the language of the entire encyclical.

The response from the Vatican will be that "fratelli" in Italian is inclusive. Sure. That what we said about "brothers" and "men" in English. Couldn't the church get ahead of the curve for once?

"Italian [and Argentinian] culture has not gotten to the point where patriarchal language is offensive and unacceptable," acknowledges Lisa Cahill, professor of theology at Boston College.

But, she noted, "The gender inclusion issue cannot be explained away via grammatical rules, which was the rationalization of English exclusive language back in the day, and not that far back.

"Technically 'man' and 'he/his' were inclusive, but they bias the imagination toward men as the primary, if not exclusive, referents, which is why they have fallen out of use as cultures become more gender-equal."

Cahill said that the outcry over the language in the United States "is predictable because the wording is so out of sync with the culture."

However, she added, the most damage "will be in patriarchal cultures where this terminology will simply reinforce the marginal and silenced position that women have always held."

Some theologians may have preferred that Francis use the term "solidarity," a favorite concept of his that he seems to realize is abstract and impersonal compared with "fraternity."

"I imagine a big part of Francis' desire is to personalize solidarity with fraternity," explains Vincent Miller, professor of theology and culture at the University of Dayton. "Once we explain solidarity, a lot of people like it. 'Brother and sister' function without explanation."

Francis also sees "fraternity" as a term that transcends religions and cultures, as in the document on "Human Fraternity for World Peace and Living Together" that Francis and the grand imam of Al-Azhar, Ahmad Al-Tayyeb, signed in February 2019 in Abu Dhabi.

But kinship references like fraternity also have their own problems.

The Nigerian Jesuit Agbonkhianmeghe Orobator noted in a 2010 article in the journal Theological Studies that kinship and family metaphors can validate tribal and in-group loyalty, as we see not only in Africa, but also in polarized U.S. electoral politics today.

Whatever the metaphor, there is always a need to push our thinking toward universalism.

The greatest concern, as Cahill and Miller suggest, is that all this discussion of sexist language will distract the media from what Cahill and Miller expect to be the outstanding content of the encyclical, which will focus on how Catholic social teaching relates to the world today.

The media "relate primarily to low-hanging journalistic fruit," complains Cahill, by focusing on "the Catholic Church is sexist."

"I don't think [giving him the benefit of the doubt] that Pope Francis is intentionally trying to confine women to a lesser place," says Cahill. "It is a matter of the ongoing ecclesial inertia, cultural limitation and tone-deafness."

Cahill, Miller and other theologians fear that the new encyclical will be treated by the media like the Amazon synod, where all the attention went to "who can be ordained," with limited focus on Indigenous issues and participation. This media obsession still upsets Francis, who feels that the Amazonian issues at the synod — the devastation of the rainforests and Indigenous peoples and their cultures — did not get adequate coverage.

Let us pray that the encyclical's language does not distract from its content.