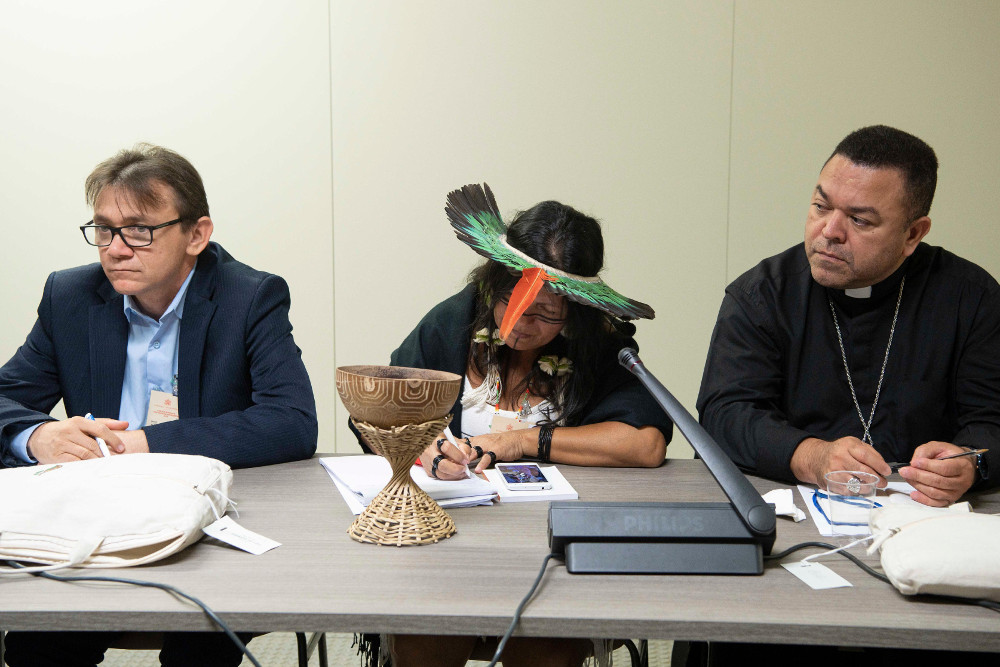 Members, observers and experts at the Synod of Bishops for the Amazon meet in a small working group Oct. 10 in the Vatican synod hall. (CNS/Vatican Media)

Ten of the 12 small working groups at the Synod of Bishops for the Amazon spent time considering the possibility of ordaining married men to address a lack of Catholic ministers across the nine-nation region, with only two of those groups appearing firmly opposed to the idea.

In a series of reports released by the Vatican Oct. 18, eight of the other groups make reference to arguments on both sides of the issue. Two groups make a direct appeal for ordinations of married men to go forward immediately, in order to allow for better access to the Eucharist.

One of the latter groups calls married priests "necessary," and suggests that either individual bishops or the nine national bishops' conferences across the Amazon be empowered to institute a change away from mandatory celibacy for priests.

The other latter group calls the matter "necessary and urgent," saying that rural communities in the Amazon want ministers who can maintain a daily presence among them, and not just ministers who visit once or twice a year.

The 185 prelates and 80 auditors and experts taking part in the Oct. 6-27 Synod of Bishops had been meeting throughout the first two weeks of the gathering in 12 small working groups, divided by language preference.

The groups — five held in Spanish, four in Portuguese, two in Italian, and one combined for English and French — had been reflecting on the gathering's working document, known as the instrumentum laboris, and on the individual speeches made during general sessions.

The Vatican released the texts of their reflections, totaling some 35 pages.

The two groups that call most prominently for the allowance of married priests are both Portuguese speaking. Another Portuguese group appears clearly against the idea, saying it requires further study.

One of the Italian groups, appearing firmly opposed, says its members expressed "perplexity" that the synod has not tried to examine more clearly why the celibate priesthood is not attractive to young men.

Another of the Italian groups offers arguments on both sides.

"Some synodal fathers ask that … mature, respected and well-known persons, celibate or with a stable family, especially indigenous, could be ordained in order to ensure access to the sacraments that guarantee and sustain the Christian life," the group states.

"The permanent diaconate, reinstituted after Vatican II, shows that it is possible to assume pastoral, sacramental and familial commitments in the church," it continues.

"Other synodal fathers think the proposal concerns all the continents, and could reduce the value of celibacy," the Italian groups says later.

"They believe that, in virtue of the theological principal of synodality, the theme should be submitted for the opinion of the whole church, and they suggest a universal synod on the subject," it states.

The possibility of ordaining married men to meet the sacramental needs of the Amazon region has emerged as a key topic of the synod. Its lead organizer, retired Brazilian Cardinal Cláudio Hummes, even brought up the issue by name in his Oct. 7 address opening the business of the gathering. 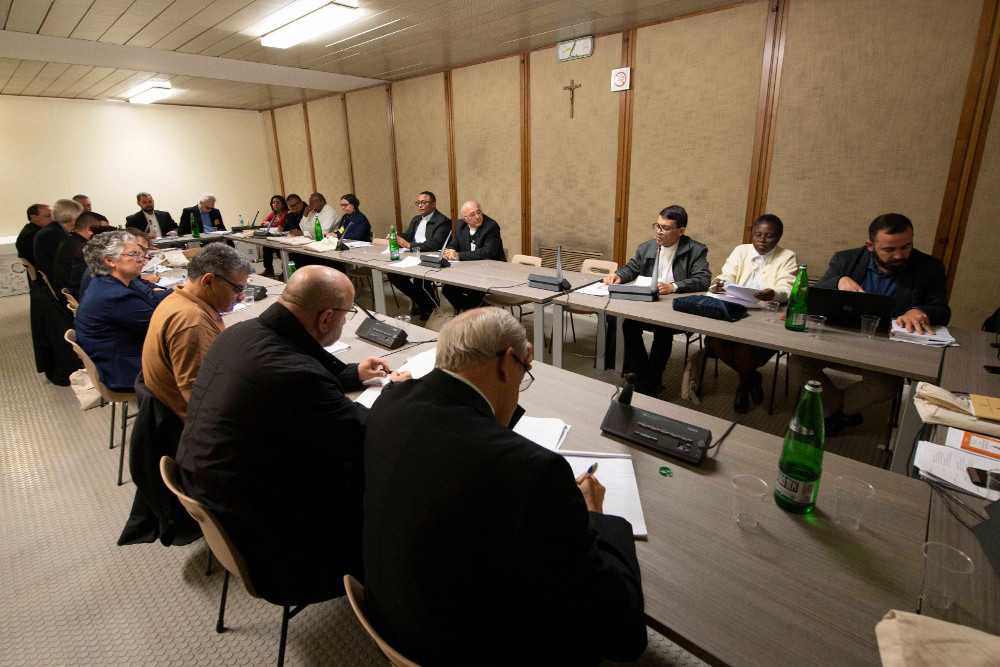 Members, observers and experts at the Synod of Bishops for the Amazon meet in a small working group Oct. 10 in the Vatican synod hall. (CNS/Vatican Media)

Another pastoral issue that comes up throughout the small group reports is the need to recognize the ministry of Catholic women in the Amazon. Nine of the 12 groups mention that matter in some way, with seven of those referring to the possibility of ordaining women as deacons.

Of the seven that refer to women deacons, three groups appear strongly in favor of the idea, including the same two Portuguese groups that call for the ordination of married men. One of those two groups says simply that "the presence of women is decisive in the life and mission of the church in the Amazon."

One of the Spanish groups does not refer specifically to the possibility of women deacons, but says women experience "discrimination … in the spaces of decision-making" in the church.

"It is necessary that in a synodal church, women assume pastoral and leadership responsibilities," it states.

Although the Vatican has provided the names of the leaders and secretaries of the small working groups, it has not released a list of the full membership of the groups.

It is expected that the 12 reports from the groups will be used in coming days as the basis for the first draft of a possible final document from the synod, which is scheduled to be presented to the bishops attending the gathering for the first time on Oct. 21.

The committee with responsibility to draft the final document has 13 members, including Hummes; Cardinal Lorenzo Baldisseri, the head of the Vatican synod office; Cardinal Michael Czerny, who is serving as an assistant to Hummes for the synod; and Austrian Cardinal Christoph Schonborn, one of four appointed to the group by Pope Francis.

A vast range of other issues are touched upon in the small group reports, including the historic levels of deforestation across the Amazon, the lack of access to clean drinking water, the destructive practices of mining and logging companies, and violence against women.

Many of the groups also speak eloquently about the need for Catholic communities in the Amazon to respect, listen to, empower and include indigenous peoples.

One of the Italian groups proposes the idea of the creation of a new "Amazon rite" liturgy "with which to express the liturgical, theological, disciplinary and spiritual patrimony" of indigenous peoples.

The secretary of that group, interestingly, is Cardinal Luis Ladaria, the prefect of the Vatican's Congregation for the Doctrine of the Faith.