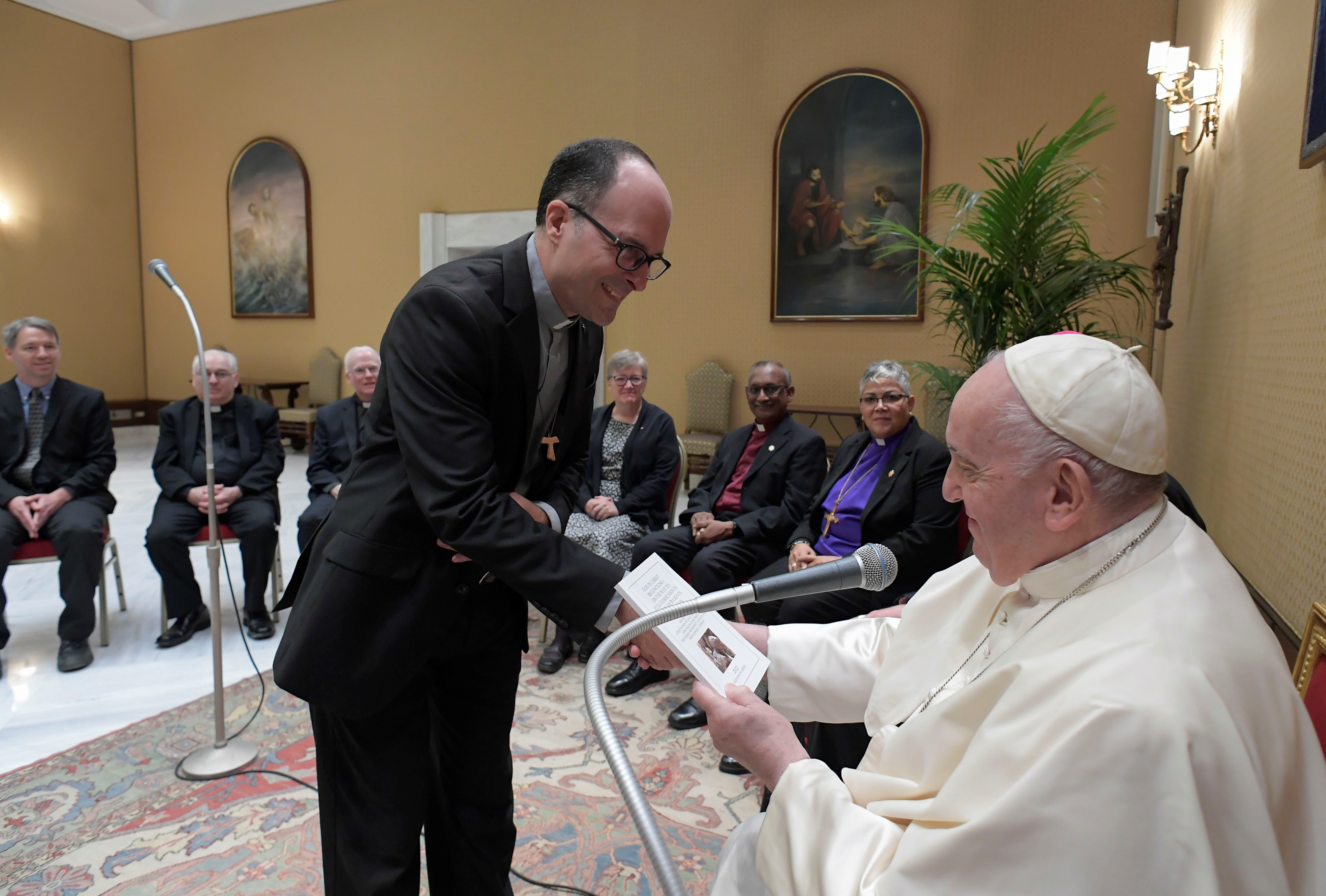 Pope Francis accepts a report from Fr. Edgardo A. Colón-Emeric, the new Methodist co-chair of the Joint International Commission for Dialogue between the World Methodist Council and the Catholic Church, during an audience with members of the commission at the Vatican Oct. 5. Colón-Emeric is dean of Duke University Divinity School in Durham, N.C., and (CNS photo/Vatican Media)

When Pope Francis celebrated the 60th anniversary of the opening of Vatican II on Oct. 11, he paid tribute to the ways the council led to an opening of the Catholic Church's relationships with other Christian churches.

But only one of those groups has been in official continuous dialogue with the Holy See since the council: the Methodists.

At the end of the Second Vatican Council, Pope Paul VI invited a number of churches to formal theological dialogue. In 1966, the worldwide communion of Methodist and Wesleyan churches were invited and they held their first formal meeting a year later.

"We received the invitation with great enthusiasm," the Rev. Matthew Laferty, director of the Methodist Ecumenical Office in Rome, told NCR, recalling the response of the Methodists at the time. "And we've never taken a break in our work."

Just before the 60th anniversary of the Second Vatican Council, from Oct. 2-8, members of the Methodist-Roman Catholic International Commission, which is the official theological dialogue body between the World Methodist Council and the Holy See, met in Rome to begin a new cycle of dialogue under the theme "unity and mission."

According to Laferty, co-secretary of the commission, the dialogues take place in five-year cycles under different themes and provide an occasion for a theological exploration of certain issues, and social and moral concerns "within the broader context of how our two churches might respond to those issues."

During this year's Rome gathering, the commission spent time hearing papers and discussing a range of topics, including synodality and each other's understanding of the hierarchy of truths.

Bishop Shane Mackinlay of Sandhurst, Australia, co-chair of the commission, told NCR that while much ecumenical work, such as the recent meeting between Methodists and Catholics, may go unnoticed, it is essential for the shared goal of unity.

"Jesus established one church. And anything that we do that diminishes that unity takes us further away from that mission," said Mackinlay. 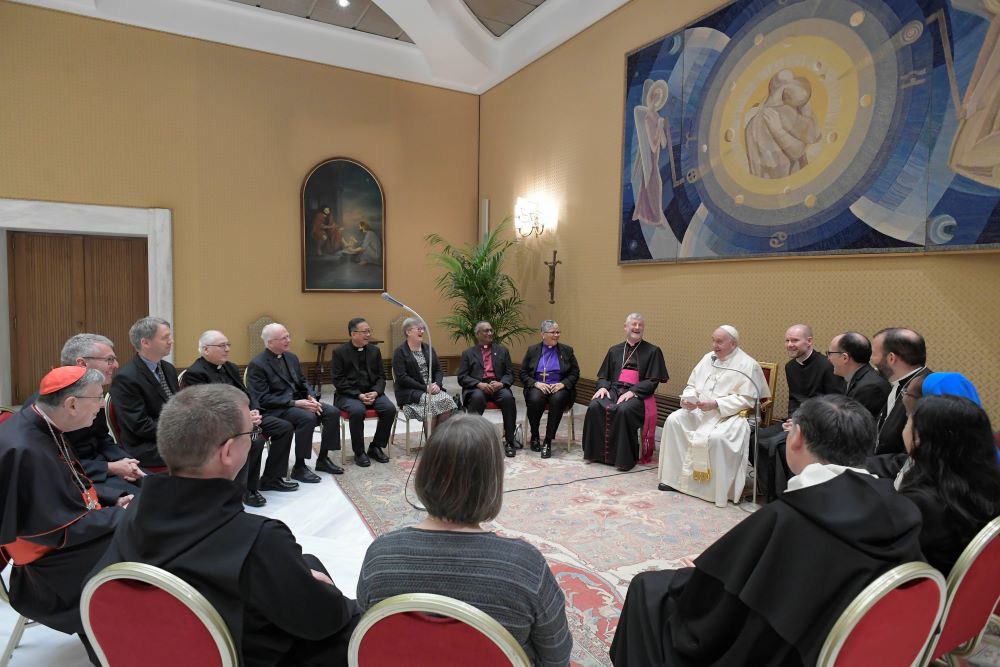 Pope Francis leads an audience with members of the Joint International Commission for Dialogue between the World Methodist Council and the Catholic Church at the Vatican Oct. 5. (CNS photo/Vatican Media)

On Oct. 5, Pope Francis received the members of the commission — who hail from Argentina, Australia, Canada, Malaysia, Nigeria, Philippines, South Africa, the United Kingdom and the United States — in a private audience, where they presented him with a copy of the report from their recently completed 11th round of dialogue.

The report, "God in Christ Reconciling: On the Way to Full Communion in Faith, Sacraments and Mission," discusses the ways the two churches understand the work of reconciliation.

Mackinlay said that when Francis was presented a copy of the report, which uses the parable of the prodigal son, the pope noted that the father in the story has two sons and both Catholics and Methodists alike need to repent for their divisions in order to return to the father.

"Ecumenism is not about one party returning because they've wandered off, while the other stayed home," Macklinay said. "It's about all the parties recognizing the ways in which each of us have moved away from the father's house and need to recover."

Fr. Anthony Currer, the commission's outgoing Catholic co-secretary, told NCR that the report is the first ecumenical dialogue in the Catholic Church's relationships with other Western churches that examines the question of sacramental reconciliation.

"We might think we were a long way apart but under closer examination some of that distance collapses and we find real convergence," he said.

"Catholics can recognize that Methodists do celebrate liturgically the forgiveness Jesus made present among us, some in forms close to Catholic sacramental reconciliation, but all in forms that are based on what we know as the penitential rite at the beginning of Mass," Currer said.

Mackinlay noted that the new report is not just inward looking, but also has a missional element focusing on the needed role of reconciliation in the world today.

It also includes a liturgical text for Methodists and Catholics to join together in a service for "renewing our commitment to reconciliation as churches."

During the commission's week in Rome, members also met with officials from the Vatican's synod office, the department responsible for overseeing Pope Francis' ongoing consultation process with the world's Catholics.

Both Laferty and Mackinlay noted that synodality has a role to play in the work of ecumenism through listening to and integrating the perspectives of other Christian communions, as well as hopefully healing divides between churches.

"It is clear that Catholics need to continue to walk with and explore these questions learning from our ecumenical partners," said Currer, referring to what he called a "receptive ecumenism."

"We recognize that these Christian communities are used by God and have therefore been blessed and gifted by the Spirit," he added. "What the Spirit has given to them needs to be received by us for our own ecclesial healing."

Macklinay said that after 55 years of nonstop dialogue, the two communions are committed to the ongoing work of shared prayer, thoughtful listening and engagement  to continually ask "What can we learn from one another to bring us closer to being the church that Jesus wants us to be?"