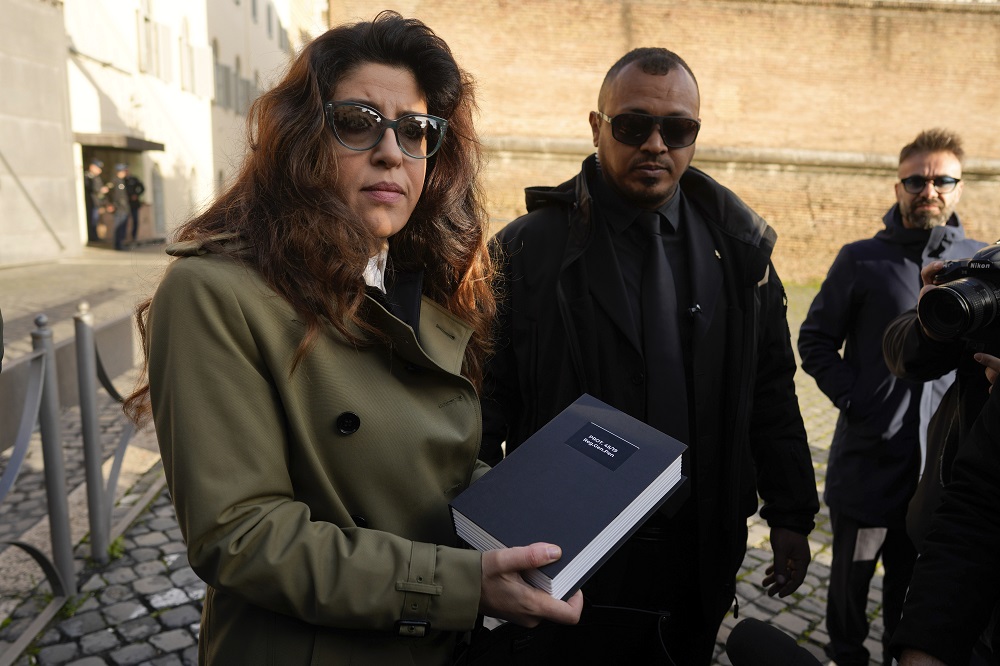 Public relations specialist Francesca Chaouqui, previously financial consultant for the Vatican, shows reporters documents, as she arrives for testimony in a trial in the city-state's criminal tribunal, Friday, Jan. 13, 2023. Prosecutors have accused 10 people, including a once-powerful cardinal and papal contender, on charges related to the Holy See's 350 million-euro investment in a luxury London real estate venture causing the Vatican the loss of millions of euros in fees to brokers, bad investments and other questionable expenses. (AP/Andrew Medichini)

In dramatic testimony at the Vatican mega-trial on financial corruption Jan. 13, a former Vatican official who spent time in prison for her role in the Vatileaks scandal admitted to influencing the deposition of Msgr. Alberto Perlasca, a key prosecution witness in the current trial.

Her goal, said Francesca Chaouqui, a former Vatican diplomat, was to alert Pope Francis to the brewing financial scandal that is at the heart of the 18-month-old proceeding that has charged 10 defendants with fraud and abuse of office.

"I believed that I had to report to the Holy Father a description of what was happening behind his back," said Chaouqui.

Chaouqui's testimony was ordered by Vatican judges overseeing the trial after Perlasca, who once headed the administrative office of the Vatican Secretariat of State, revealed in his own testimony in early December that his deposition was made under pressure from Chaouqui. Perlasca, once a target of the investigation into his department's purchase of a luxury London real estate property, has given prosecutors crucial information about the involvement of his former superior, Cardinal Angelo Becciu, one of the 10 defendants.

Chaouqui was appointed by Francis in 2013 to the commission on the Holy See's economic-administrative structure, tasked with reviewing the pope's efforts to reform the Vatican's financial systems. She oversaw its archives until 2016, when she was convicted of leaking confidential information in the scandal known as Vati-leaks II and sentenced to 10 months in prison by a Vatican court. Her sentence was later suspended.

On Friday, Chaouqui accused Becciu of playing a crucial role in her arrest.

Chaouqui described her situation after her conviction as that of an outcast seeking redemption in the eyes of the pope. She said she began looking into the real-estate deal and other Vatican financial moves in 2020, drawing from her previous experience and contacts.

"I believed that the Holy Father had been presented with false information on a series of issues," Chaouqui told the court Friday. She portrayed the trial as a further step in Francis' efforts to "bring the Vatican Secretariat of State to justice."

She explained that her first objective was to convince Perlasca to speak to the pope about what he knew. She reached out to Genoveffa Ciferri Putignani, a consecrated lay woman and a close friend of Perlasca's, who was also on the stand Friday.

Through Putignani's intercession, Chaouqui guided Perlasca in his written answers from prosecutors in his August 2020 deposition, both women said. Fearing Perlasca would bristle at suggestions from Chaouqui, Putignani told Perlasca that the advice came from a "retired magistrate."

"The deposition was written by Perlasca himself," Putignani said, "but it's clear that he was coaxed by Chaouqui."

In her testimony, Putignani said that in her effort to convince Perlasca to come forward, Chaouqui claimed to be working with Vatican prosecutors, gendarmes and even Francis. She said Chaouqui sent Perlasca details through Putignani about the Vatican investigation into Becciu and the London property deal.

"It was clear that Monsignor Becciu kept Monsignor Perlasca under his talon for years in a psychological enslavement," Putignani said, calling the cardinal and monsignor both by the title customarily used for all officials in daily Vatican conversations. Putignani described Perlasca as a man marked by a "total loyalty to his superiors," for which Becciu, she believed, rewarded him by attempting to "eliminate" Perlasca.

"Despite all the pressure from Cardinal Becciu, Perlasca decided to speak the truth," Putignani said. Putignani added that Perlasca at one point wrote to Francis to tell him the facts of the case; the pope answered him with a letter of encouragement, she said, without offering proof.

Relations between Chaouqui and Putignani eventually soured, with Putignani saying Chaouqui treated her and Perlasca as "the town fools." Chaouqui for her part claimed Putignani was hostile to Francis. Putignani told the judges she reported Chaouqui to Vatican authorities five times.

At the end of the day's proceedings, Becciu made a voluntary declaration to the court in which he raised his doubts about the close relationship that Chaouqui claims to have with Francis. While denying that he was behind Chaouqui's arrest, Becciu said he thought her unqualified to work for the Holy See. He also claimed that Francis refused to offer Chaouqui a pardon when he asked on her behalf in 2017.

"The madam succeeded in her plan to take her revenge on me," he concluded.

The next trial date was set for Jan. 26.