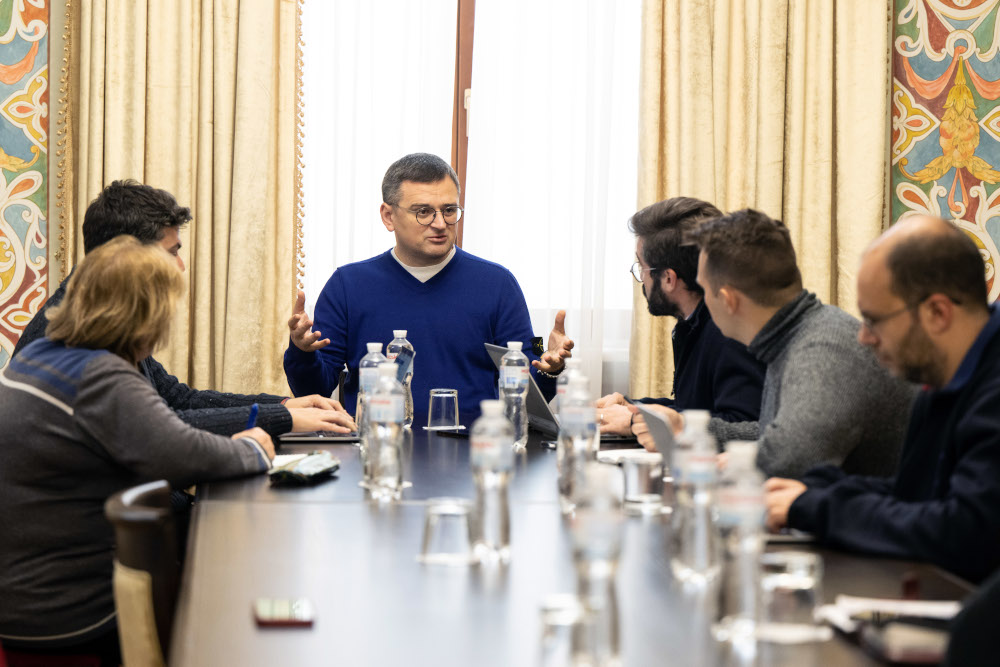 Ukraine's foreign minister on Dec. 9 said that the Holy See cannot call on both Russia and Ukraine to bring about peace and that if the Vatican wants to play a role in an eventual peace negotiation, it must be willing to "call a spade a spade" and put the responsibility squarely on Russia to end the nine-month long war.

"Do not try to use the following argument: 'I am trying to fix this issue, therefore, I cannot call a spade a spade, I have to be neutral in my public comments, otherwise, it will scare off the Russians,' " said said Dmytro Kuleba, who has served as the minister of foreign affairs under Ukraine President Volodymyr Zelensky since 2020.

"This is what we don't accept," he said.

Kuleba's remarks came in an exclusive joint interview in the Ukrainian capital's Ministry of Foreign Affairs with five journalists from the National Catholic Reporter, ACI Stampa, ANSA, La Croix and Vatican News, organized by Poland and Ukraine's embassies to the Holy See.

The foreign minister said that Pope Francis has been a "symbol of sympathy, compassion and spiritual support" for the Ukrainian Catholics, noting that his prayer on Dec. 8 where he publicly wept for the suffering of the Ukrainian people "goes directly to the hearts of Ukrainians."

But at the same time, he said that Francis cannot jointly call on the governments of both Russia and Ukraine to end the war, as it gives the impression that both parties bear some of the responsibility.

Specifically, he described the pope's Oct. 2 Sunday Angelus address — where Francis called on Russian President Vladimir Putin to stop the war and for Zelensky to be open to "serious proposals for peace" — as unhelpful.

"When you say, 'I call on President Putin to stop the war,' that makes perfect sense because President Putin started the war, and this is what you're telling him to do," said Kuleba.

But by calling on Zelensky to be open to serious peace negotiations, the pope gives the impression that the Ukrainian president is "not open to peace proposals and that he needs to be called upon to become open to it, which is simply not true," the foreign minister said.

"No other country in the world wants peace more than Ukraine," he countered.

While Francis has pleaded for peace in Ukraine on more than 100 occasions since the Feb. 24 invasion of the country and has directly named Russia as the aggressor, at various moments he has prompted outrage from Ukrainians and some western allies by saying the war could not be reduced to a distinction of "good guys and bad guys" and repeating the idea that the war was prompted by "the barking of NATO at the gates of Russia." 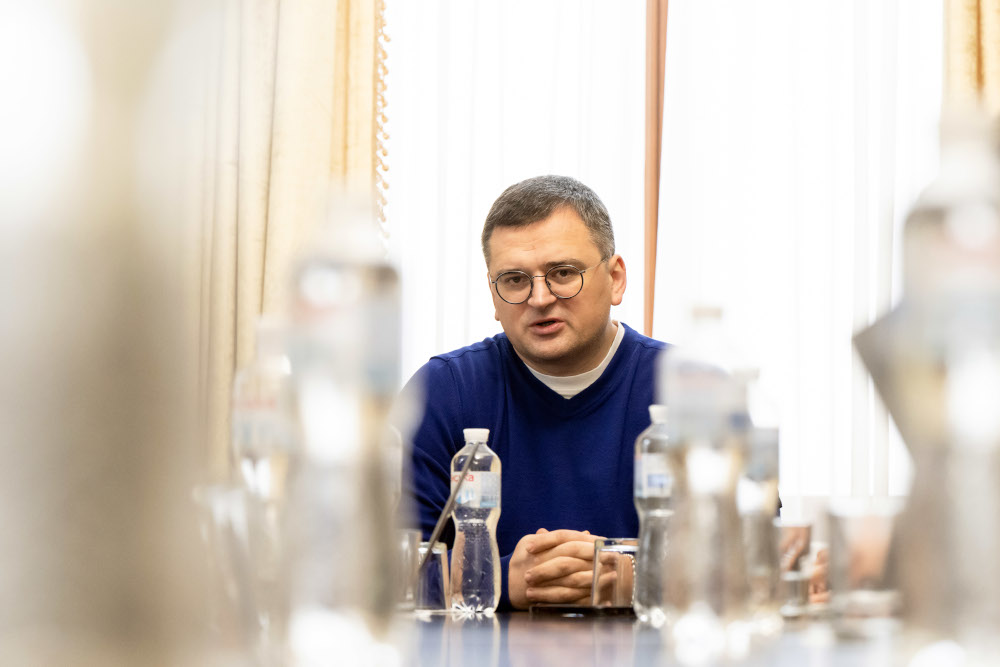 In June, Kuleba said in an interview that the Vatican needed to gain a better understanding of why Russia invaded Ukraine.

Six months later, in his heavily fortified office building in the heart of the country's capital, the 41-year-old minister told journalists that he believes the pope is improving in how he speaks about the war.

"It was painful for us to hear certain things from him," he said. "But at the same time, I have to commend the pope for being open to reality, to accepting the new reality to be revealed. He's constantly open to finding the truth, and I have the impression that he has found it."

Since the outbreak of the war, Russian Orthodox Patriarch Kirill has emerged as a key backer of Putin's invasion, often using religious language to bless Russian war efforts and prompting a number of parishes of the Ukrainian Orthodox Church under the Moscow Patriarchate to join the country's independent Orthodox Church.

On Dec. 2, Zelensky signed a decree enacting a decision by the country's National Security and Defense Council that imposes sanctions on any religious representatives associated with Russia.

Kuleba did not mince words about Kirill or the Moscow Patriarch's role in the war.

"The Russian Orthodox Church betrayed God," he said. "Everything they do is against God's will. I don't think it's neither morally nor politically acceptable to be affiliated with this institution."

While he said that religious adherents have the right to freedom of religion and to practice their faith as they desire, he said the Ukrainian state would use "all legal ways" available to it to suppress without hesitation any religious groups "who want to destroy Ukrainian statehood."

According to Kuleba, a number of Russian Orthodox priests and some bishops have blessed Russian war efforts, harbored spies and disseminated materials favorable to Russia.

"In times of war when the nation is fighting for its survival," he said, "this is unacceptable."

"The Russian Orthodox Church betrayed God. Everything they do is against God's will. I don't think it's neither morally nor politically acceptable to be affiliated with this institution."

While rumors of a potential visit of Francis to Ukraine have swirled since the start of the war — and even seemed likely at the end of the summer — Francis has continued to postpone such a visit, saying that he would prefer to visit both Kyiv and Moscow.

Even so, Kuleba, who just met again with the Vatican's foreign minister, Archbishop Paul Gallagher, in Poland earlier this month, says Ukraine is "looking forward to welcoming [Francis] at his earliest convenience" and that he believes such a visit remains useful and necessary.

As for what the Holy See can and should be doing at this point in the war, he said that support would be welcome aiding in the return of Ukrainian children kidnapped and taken to Russia, supporting prisoner exchanges or ensuring the export of grain to feed the world.

But, he cautioned, the Vatican must avoid any confusion or misunderstandings on where they stand on Russia.

Be it the Holy See or any other country, he said that nations cannot continue to insist on the concept of the necessity of peace among the brotherhood between Russians, Ukrainians and Belarusians.

"We are not brothers," he said. "If Russia continues to exist to insist on the concept of brotherhood, it's the Cain versus Abel kind of brotherhood. They [Russia] came to kill to rape and to violate all the laws of God on the land of Ukraine."

Also, he said, they must "always remember that Russia is the aggressor. Ukraine is the victim of the aggression. And nothing shouldn't be said or done that puts two countries on the same footing."

As for what a "serious proposal for peace" might look like, as requested by Francis, Kuleba's position is based on one fundamental principle: "the territorial integrity of Ukraine must be restored in full. Then, we can talk about everything else."

For now, however, he says "the sad truth is that the time for this broad mediation for peace hasn't come yet and the reason for that is President Putin," whom he says does not desire it and does not operate in good faith.

But, he adds: "The day for a big mediation will come. And of course, if the Holy See wants to play a role, it will."

A version of this story appeared in the Dec 23, 2022 - Jan 5, 2023 print issue under the headline: Ukraine's foreign minister: Vatican must 'call a spade a spade' when speaking on Russia .