At COP22 and on Capitol Hill, faith groups step up climate efforts 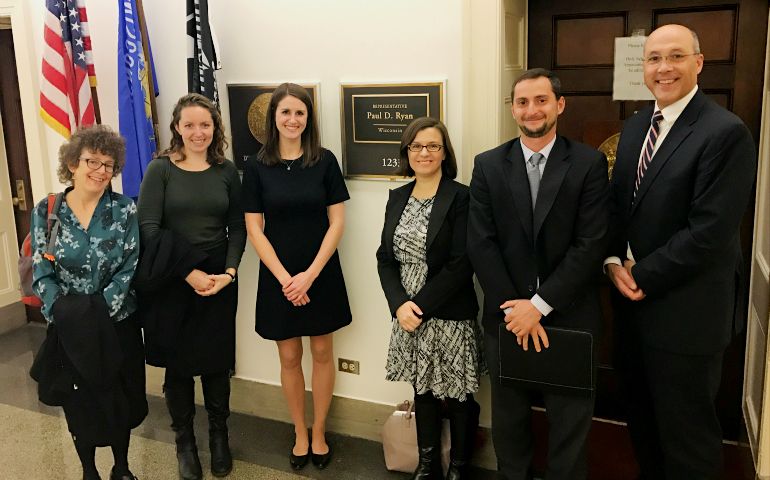 Throughout the second and final week of COP22, the tenor at the annual international climate conference continued to reverberate with reaction to the U.S. presidential election.

Messages on Tuesday from both United Nations Secretary-General Ban Ki-moon and French President François Hollande, whose nation hosted the COP21 that culminated in the Paris Agreement, pushed back against President-elect Donald Trump's campaign trail promises to pull the United States out of the binding climate action deal reached last December.

"It is essential that the United States, the greatest economic power in the world, the second-largest emitter of greenhouse gases, respects the commitments it has made," Hollande said in his address to gathering in Marrakech, Morocco. "It is [in] their interest."

Ban told a press briefing that he has spoken to Trump since his Nov. 8 election, including on climate change, and that his hope is Trump "will really hear and understand the seriousness and urgency of addressing climate change," and reevaluate campaign remarks now that he is president.

Pressed on whether he thinks that change has already come, the secretary-general said that he believes that, as a businessman, Trump recognizes market forces "already at work on this issue, and that we need to harness these forces for the good of the planet and all the species in this planet."

Ban, who said he plans to revisit the issue when the two meet in person, added that numerous U.S. states, cities and corporations are moving forward on climate action on their own. A statement from 365 U.S. companies, including General Mills, Intel, Nike and Unilever, implored Trump and global leaders not to back away from the Paris Agreement.

"As I said earlier, what once seemed to be unthinkable has now become unstoppable," Ban said of actions being taken to address climate change.

During the high-level meetings Thursday, the summit's penultimate day, delegates launched an action plan to accelerate efforts in the interim (2017-20) and a 2050 pathways platform to assist countries to develop long-term net zero-emissions strategies. They also agreed to the final text of the Marrakech Action Proclamation for our Climate and Sustainable Development, meant as a further signal of “a shift towards a new era of implementation and action” on those two fronts.

The proclamation, delivered by Moroccan Ambassador Aziz Mekouar, states unanimous agreement in the need for nations to build off “irreversible” momentum from the Paris Agreement’s rapid entry into force to close the gap between the deal’s goals (hold average global temperature rise to 1.5 to 2 degrees Celsius [3.6 degrees Fahrenheit]) and current trajectory of emissions reductions under current national climate plans (temperature rise of roughly 3 degrees Celsius).

“We call for the highest political commitment to combat climate change, as a matter of urgent priority,” the proclamation read.

In his own message to COP22 delegates, Pope Francis called them to "the grave ethical and moral responsibility to act without delay, in a manner as free as possible from political and economic pressures" in their efforts to combat climate change.

"The Paris Agreement has traced a clear path on which the entire international community is called to engage. ... It affects all humanity, especially the poorest and the future generations, who represent the most vulnerable component of the troubling impact of climate change," Francis said.

So far, 112 countries representing nearly 80 percent of global greenhouse gas emissions have ratified the universal climate deal, with the United Kingdom on Thursday the latest to do so.

Earlier in the day, the U.S. submitted one of the first long-term low-emissions strategies, along with Germany and Mexico, which maps a path to reduce emissions by 80 percent below 2005 levels by 2050. (Prior U.S. commitments pledged 26-28 percent emissions reductions by 2025.)

As for COP22, which has been called the "COP of action" and is set to conclude Friday, the pope said its complex work of defining rules for the Paris Agreement and other institutional mechanisms "cannot be delegated solely to technical expertise, but which require continual political support and encouragement, based on the recognition that" — in quoting his encyclical "Laudato Si', on Care for Our Common Home" — "'we are one single human family. There are no frontiers or barriers, political or social, behind which we can hide, still less is there room for the globalization of indifference.'"

Trump has pledged to remove the U.S. from the Paris Agreement, and news reports indicate his transition team has explored expediting the four-year withdrawal process by removing the U.S. entirely from the 1992 U.N. Framework Convention on Climate Change. He has also said he would as president suspend U.S. payments to U.N. climate programs, as well as eliminate the U.S. Environmental Protection Agency, including its rules on coal- and gas-fired power plants under the Clean Power Plan.

All three of those programs have been a focal point of support in recent years for Catholic organizations, including the U.S. Conference of Catholic Bishops.

During a webinar from Marrakech Tuesday, members of the Global Catholic Climate Movement said that while participants at COP22 continue to process the ramifications of the U.S. elections — which also saw a Republican Party historically hostile to climate issues retain control of Congress — their network and others will need to step up their activism and engagement with politicians.

"We really need to increase the pressure on our governments" in light of Trump's election, said Tomás Insua, global coordinator of the Global Catholic Climate Movement. He added that with the White House potentially difficult to engage, more focus may turn to members of Congress.

Those efforts have already begun.

On Tuesday, members of the U.S.-based Catholic Climate Covenant met on Capitol Hill with staff of the House leadership of both parties: Speaker Paul Ryan, R-Wis., and Minority Leader Nancy Pelosi, D-Calif.

The discussions centered on urging the U.S. to follow through on its pledges under the Paris Agreement. A petition signed by thousands of Catholics that reiterated that message was given to both offices, as well as delivered to those of Senate Majority Leader Mitch McConnell, R-Ky., and new Senate Minority Leader Chuck Schumer, D-N.Y.

Specifically, the petition called for members of Congress to resist attempts to roll back EPA carbon rules and the Clean Power Plan, and to follow through on financial support for the Green Climate Fund, which has a goal of $100 billion annually by 2020 to assist developing nations in mitigation and adaptation efforts to climate change.

Sarah Spengeman, director of programs for Catholic Climate Covenant, said the conversation with Ryan's staff was "very polite and cordial." She found it encouraging they indicated a desire to learn more about Catholic interests and to continue the dialogue — an offer the group intends to uphold to convey climate as a priority.

His staff emphasized that while the speaker, himself Catholic, held stewardship as an important value, "he is always concerned, too, about jobs and employment and making sure that we don't take actions that might cost jobs."

To that, the Covenant contingent pointed to existing, and in-practice, market solutions to dealing with climate change, such as clean energy development and energy efficiency measures in buildings and infrastructure, and the job and economic growth that accompanies them.

"We emphasized that there's a lot of opportunity there for the U.S. to be a global leader, and we really don't want to cede the moral high ground to China," Spengeman said. "We think that Republicans definitely get that message."

She added that the group stressed the mission of Catholic Climate Covenant is not only care for creation but also care for the poor, and conveyed the need to assist people affected by climate policies.

Joining Spengeman were Covenant executive director Dan Misleh; Marianne Comfort, justice coordinator for Earth, anti-racism and women for the Sisters of Mercy of the Americas; Rebecca Eastwood of the Columban Center for Advocacy and Outreach; and Ricardo Simmonds of the U.S. bishops' environmental justice program.

While Spengeman is reservedly optimistic that a GOP-controlled government might break the partisanship around the climate issue, she and others recognize their work only becomes more difficult with Trump in the White House.

"It's just more important than ever for people of faith to really be loud and to be active and to be engaged and involved in the process, and to continue to communicate the message that this is important for us as Catholics," she said — a message reiterated to the group by Pelosi's staff.

'Get more on board'

At COP22 on Wednesday, faith leaders delivered to a senior U.N. official an interfaith climate statement signed by more than 230 religious leaders from 44 countries, including the Dalai Lama. The statement called for nations to accelerate the transition to a low-carbon economy toward achieving the 1.5 degrees goal, and to divest trillions of dollars in fossil fuels and reinvest them in renewable energy.

"If we continue to damage our vital support system through over-exploitation, contamination and destruction of the climate that protects us, the life-giving minerals, soil that feeds us, the oceans and freshwater sources that sustain us, we do so at our own peril. We must take swift action, guided by our faiths and work in service together as a global Earth community," the statement read.

The signers, representing a vast array of faiths, included Msgr. Marcelo Sánchez Sorondo, chancellor of the Pontifical Academy of Sciences; Anglican Archbishop Desmond Tutu; and Sayyid Syeed of the Islamic Society of North America, which on Nov. 10 became the first Muslim institution to publicly divest from fossil fuels.

During the Global Catholic Climate Movement webinar, the Rev. Fletcher Harper, executive director of GreenFaith, which organized the statement, said, "This scope of response" — with the leaders representing 75 percent of the world's population — "demands our attention."

He and others echoed calls for faith communities, and in particular Catholics, "to get more on board" and involved in groups addressing climate issues in light of geopolitical developments.

During the Advent season, which begins Nov. 27, the Global Catholic Climate Movement will launch a campaign on consumerism and reflecting on lifestyle decisions.

It has also planned a series of programs for 2017, including its annual Lenten climate fast, and a special observance of Divine Mercy Sunday, which will fall a day after Earth Day (April 22). The following weekend, it is encouraging its network and all Catholics to participate in a major climate action march in Washington, D.C., on April 29, 2017 — the 100th day of Trump's presidency.

"It's up to us to actually deliver the message to the Trump administration that we really are calling for bold climate action," Insua said, and through ramped-up organizing and outreach demonstrate "we will struggle and struggle hard."

EarthBeat | At COP22 and on Capitol Hill, faith groups step up climate efforts