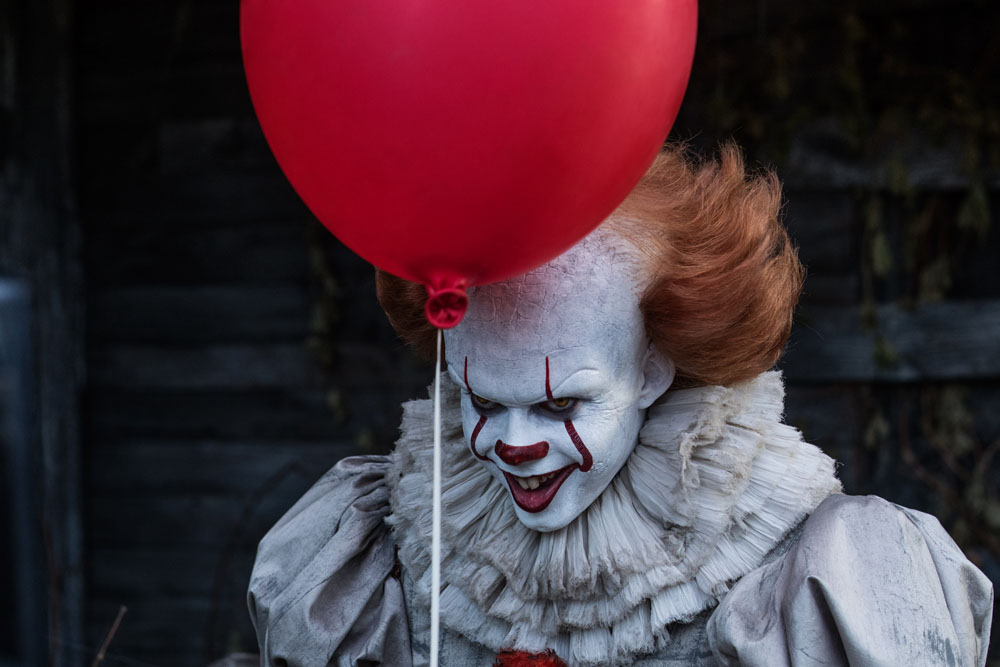 Bill Skarsgård stars in a scene from the movie "It." (CNS/Warner Bros.)

Last week I decided to change lanes from watching small independent or world films to watching a horror film, "It," directed by Andy Muschietti ("Mamá"), written by Chase Palmer, Cary Fukunaga ("Beasts of No Nation") and Gary Dauberman ("Annabelle"). "It" is the screen adaptation of Stephen King's 1986 best-selling novel of the same title.

Horror is not my preferred genre, because if not done well scary films can be spook fests to the already frightened but with little else to recommend them.

"It" follows a group of young teen outliers, six boys and a girl, over nine months in 1989, especially the summer, in Stephen King's fictional Derry, Maine. The kids call themselves "The Losers Club" as they face the terrors of bullies and abusers, and confront the horror in the disappearances and deaths of children, as well as the freakish phantasm of a pied piper-like clown, and blood. Lots of blood. But is it really? Or just an image of my mind?

The scene is set in 1989 when 7-year-old Georgie (Jackson Robert Scott) goes to sail a paper boat in the rain that his older brother Bill (Jaeden Lieberher), who is sick in bed, makes for him. Georgie goes outside and follows the boat down the gutter to a storm drain, where the clown "Pennywise the Dancing Clown" (Bill Skarsgård) tears off the child's arm and drags him in when he reaches for the boat. Georgie is never seen again.

Several months later, Bill's mother is out of it (and never shows); his father has no patience. Bill keeps looking for his sweet little brother because his remains have never been found. He wants to believe his brother is still alive.

Bill's dorky friends include Richie (Finn Wolfhard), with his coke-bottle glasses, Eddie (Jack Dylan Grazer), who has asthma and needs his inhaler (with good reason if you ask me), Stanley (Wyatt Oleff), trying to prepare for his bar mitzvah while distracted by all things creepy, Ben (Jeremy Ray Taylor), a chubby, bookish kid who is onto the town mystery, and Mike (Chosen Jacobs), a black kid who lives with his grandfather and has to learn, reluctantly, how to slaughter goats. Bill and Ben fall for the only girl in their group, Beverly (Sophia Lillis). She puts on a good act but her father has raped her.

The other threat (can you keep count?) that moves the action along is that of high school bully Henry (Nicholas Hamilton) and his friends. They meet up with the kids as they roam the town and at the lake where the storm drain empties, and threaten them.

The thing is, the kids fight back.

Ben discovers newspaper clippings in the library about the disappearance of people since the town was founded — at 27-year intervals. Guess what? 1989 is a 27th year. The kids locate the place where the first disappearance happened, go down that rabbit hole (a well, really) and into the storm drain tunnels where Georgie disappeared, creating a never-ending, cause-and-effect chain of events. Add a clown's image in those old newspaper clippings, and bright red balloons in full color throughout the film, the kids realizing they are all seeing him, and you have a recipe for a decent horror film.

Several years ago, I heard Wes Craven (1939-2015) tell the then horror movie novice Scott Derrickson ("The Exorcism of Emily Rose" and others) that the reason people go to horror movies is because they are already scared. Horror films allow the audience to put a frame around their fear, and, by the end, control it.

Craven's description fits Muschietti's film and makes it worth seeing. Besides, the ensemble of kid characters is outstanding (if not somewhat like the kids in the Netflix hit series "Stranger Things," which, who knows, may be a rip-off of another Stephen King novel or even "It" the original book, or the 1990 miniseries which I have not seen.) They are awesome actors who are afraid and heroic, fearful and fearless at the same time, eventually willing to lay down their lives for one another to make up for the evil done by the clown — and that is perpetrated by the adults and bullies in their lives.

These kids know that love overcomes all fear and their connection, their friendship, their community of misfits, has power over anything that can harm them. It was rather wonderful to see them realize this.

The clown is obviously a symbol of fear and what threatens people. You can interpret this as you wish, but I think the blood he spills has a dark purpose of balancing some force of evil (as the lack of good) that has harmed — or disturbed him. But the kids are having none of what he has to offer, even when it seems like a good. What does the spilling of blood mean? Is it literal or symbolic of realities we can or cannot see?

It's interesting that there are very few mother characters in the film, and the one who does appear is less than ideal. The fathers or father figures are not worth much, either. These adolescents are on their own in a scary adult world.

"It" offers mature viewers much to think about but it would be a huge mistake to think it is a film for children just because it's about young teens. The film's one-thing-leading-to-the-next goes on about 20 minutes too long for my liking. Still, if you are not afraid of a challenging film, you may appreciate it.

Stephen King often threads human values and Christian themes through his stories, and I think the writers kept faith with this tendency in the film.

(Oh goodie. I hear there's going to be a sequel.)