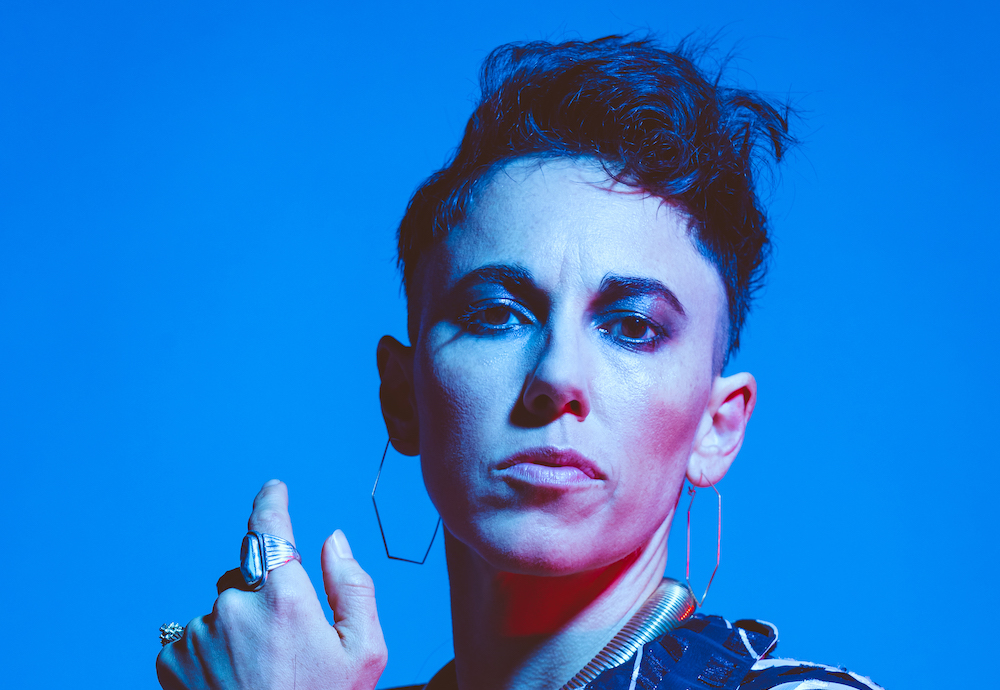 Singer-songwriter Gina Chavez poses for a photo in January. Chavez said as a multi-ethnic, queer Latinx Catholic, she hopes to build bridges between different communities and open doors for other people of color and LGBTQ people. (Ismael Quintanilla III)

Growing up in Austin, singer-songwriter Gina Chavez was a "super Catholic geek."

Throughout her adolescence, she attended youth groups and Bible studies and World Youth Day. During junior year at the University of Texas at Austin, she joined the UT Catholic Center.

And it was through the Catholic Center — on a retreat after graduation — that she met Jodi Granado, who would later become her wife.

"Our relationship was all Jesus' fault," she said, laughing.

Chavez, now 38, describes herself as a queer, multi-ethnic Latinx Catholic, who attends Mass with Granado at St. Austin Parish, just outside the campus of her alma mater.

She's known for her versatile, bilingual music, featuring rhythms influenced by her travels in Latin America, and lyrics often inspired by social justice themes and by her relationship with Granado.

Chavez's latest album, "La Que Manda," ("The woman in charge") was nominated for a Latin Grammy award for best pop/rock album. The winners will be announced Nov. 19.

Chavez is a 12-time Austin Music Award winner, and in 2015, she recorded an NPR Tiny Desk Concert that garnered more than 1.2 million views on YouTube.

Chavez first picked up a guitar at age 18, after watching Austin blues singer Toni Price at a concert with her parents. Chavez found Price's guitarists enthralling.

When they got home from the concert, she asked her father if he still had a guitar in the closet. He did — a "droolworthy" 1954 Martin.

"I basically stole it," she told NCR. "He taught me how to do a certain finger-picking pattern, and sing 'Blowin' in the Wind' by Bob Dylan."

In 2007, she released her first album, "Hanging Spoons," incorporating Catholic imagery in songs like "St. Anthony" and "Brother Sun," which calls to mind the prayer of St. Francis of Assisi.

Before she started dating Granado, Chavez said, she thought love songs were, "just like, gag me with a spoon." But in the 14 years she and Granado have been together, much of Chavez's music — including several of the songs on her 2014 album "Up.Rooted" and her 2018 EP "Lightbeam" — has been dedicated to their love.

It was a love that, at first, Chavez found difficult to reconcile with her Catholic faith.

"It was absolutely devastating to me to figure out that I was a lesbian," she said. "I literally tried to pray my own gay away." 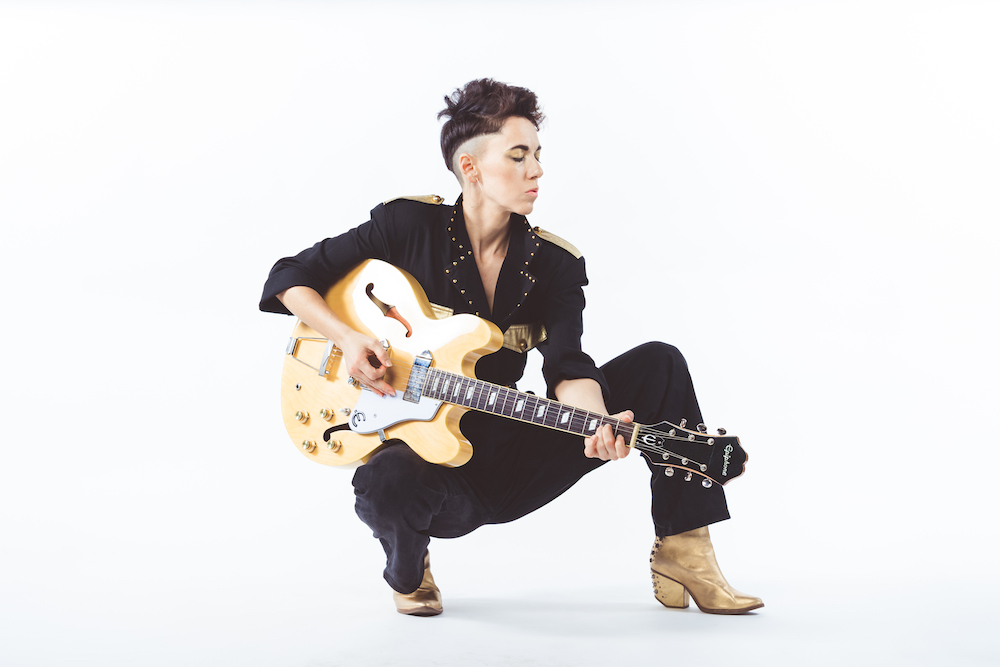 Singer-songwriter Gina Chavez poses for a photo in January. She is the only woman nominated for a Latin Grammy in the pop/rock album category this year — a category that has been dominated by men since its inception in 2012, she said. (Ismael Quintanilla III)

Two Catholic mentors — a priest and a nun at St. Austin — helped her accept who she was. One day, she and the priest, the late Paulist Fr. Jim Weisner, took a walk around the church to chat.

Even so, she didn't quite believe him. Every time she thought about Granado, she would beg God for answers — were these feelings she had good or bad? Love or lust? Beautiful or ugly?

In 2015, following the Supreme Court's decision in Obergefell v. Hodges, same-sex marriage became legal in Texas. Chavez and Granado got engaged and started planning a wedding.

Chavez had always known the Catholic Church's stance against same-sex marriage. One day though, sitting in the pews of her beloved parish, it hit her that despite spending her whole life going to Mass, she couldn't get married in the church she considered her spiritual home.

"It was like the end of a relationship — it was like grieving something that's over," she said. "I cried. I went home ... and Jodi just held me."

A few weeks later, she was playing a gig at a ranch and started talking onstage about how she and Granado were struggling to find a venue that fit in their budget. The ranch owner offered to let her use the space for the wedding.

"For me, it really felt like a big hug from above that said, 'Gina, I got you.' " she said. "The church is bigger than those walls over there."

When she and Granado married in 2017, the ceremony was beautiful, Chavez said. She memorialized the day in a music video for her song "Heaven Knows," a love letter to Granado.

"Every day, I want to shout to everyone that love is love is love is love, and ours was made to last," Chavez sang in the video. "Heaven knows every star that shined the night you cast me in your glow, and I thank God you walked into my life."

Chavez said she's found a faith community in St. Austin that accepts her and Granado, and that Catholicism is her most important cultural identity. She has more Catholic friends than gay ones, she said. But there aren't many Catholic churches she'd feel comfortable in besides St. Austin, she said.

It also pains her that not every LGBTQ person has access to a welcoming Catholic community in their region, Chavez said.

"If you don't have a place where you can go where you feel affirmed and accepted, then is that a church?" she said. "If you're not accepted for who you are, then, well — we missed the boat on Christ's message."

She said she admires the work of Jesuit Fr. James Martin and other Catholic advocates and wishes the church would "stand up and fight" for LGBTQ rights.

"We need people to shake it up," she said. "It's hard to shake things up from the outside."

Chavez has been shaking things up in her music as well, creating social justice-inspired anthems and raising funds for various causes.

In the song "Ella" ("She"), from the same album, Chavez both decries domestic violence and celebrates the resilience of survivors.

On Oct. 8, she released a video for the song, directed by Lisa Donato, to raise money for Survive2Thrive, a nonprofit that supports domestic violence survivors.

Chavez is also a long-time supporter of women's education. In 2010, after she and Granado spent eight months teaching in a low-income neighborhood of Soyapango, El Salvador, the two started a college fund called Niñas Arriba that provides scholarships for women in the municipality to attend a local Catholic university.

As she has learned more about white supremacy and patriarchy, Chavez said she's become more outspoken about social justice in her music.

In September, she appeared on a version of the anti-racist anthem "Brown Power" with Chicago singer-songwriter Zeshan B, which was featured by The Late Show with Steven Colbert.

Chavez said she benefits from light-skin privilege as a multi-ethnic Latinx person with a white parent (her father is of Mexican heritage and her mother is Swiss-German). In a world in which "we breathe the air" of racism from birth, she said she's been looking for ways to work for racial justice.

"[In some situations,] it may not be my place to speak up — it may be my place to try and make room for somebody else," she said. "And at the same time, I think, with my voice and with my music, it's time for me to take a bigger stand."

People with privilege sometimes take her more seriously than they would a darker-skinned person of color or a more masculine lesbian, she said. And her multifaceted identities allow her to "walk in multiple spheres." She said she wants to use that access to change minds and open doors for other people. 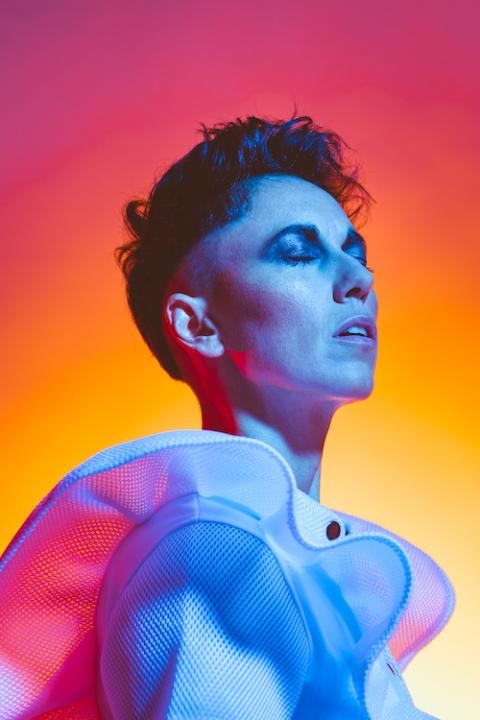 Singer-songwriter Gina Chavez poses for a photo in January. Her latest album, "La Que Manda," is her first entirely in Spanish and was nominated for a Latin Grammy award. (Ismael Quintanilla III)

"Maybe that's what God gave me, is the ability to be a bridge," she said.

Chavez said 2020 has been "bittersweet" for her. In the midst of a global pandemic and ongoing racial injustice and political unrest, she's notched some career highlights.

She said the Latin Grammy nomination was a huge step, and she is looking forward to the upcoming awards announcement. She is the only woman nominee in her category this year and one of just a handful since the category's inception in 2012, she said.

On Sept. 29, when the nominations were announced, she posted a video on her public Instagram page where she danced around the room in a t-shirt and baggy shorts, shouting and laughing.

Chavez is also looking forward to working on her next album and producing more music videos, she said. She said she'd love a shot at a Grammy award.

"I feel blessed that people listen to my voice," she said. "I want to continue to make sure that I use that platform ... to help spread some good, to help bring some unity, to help build a bridge."