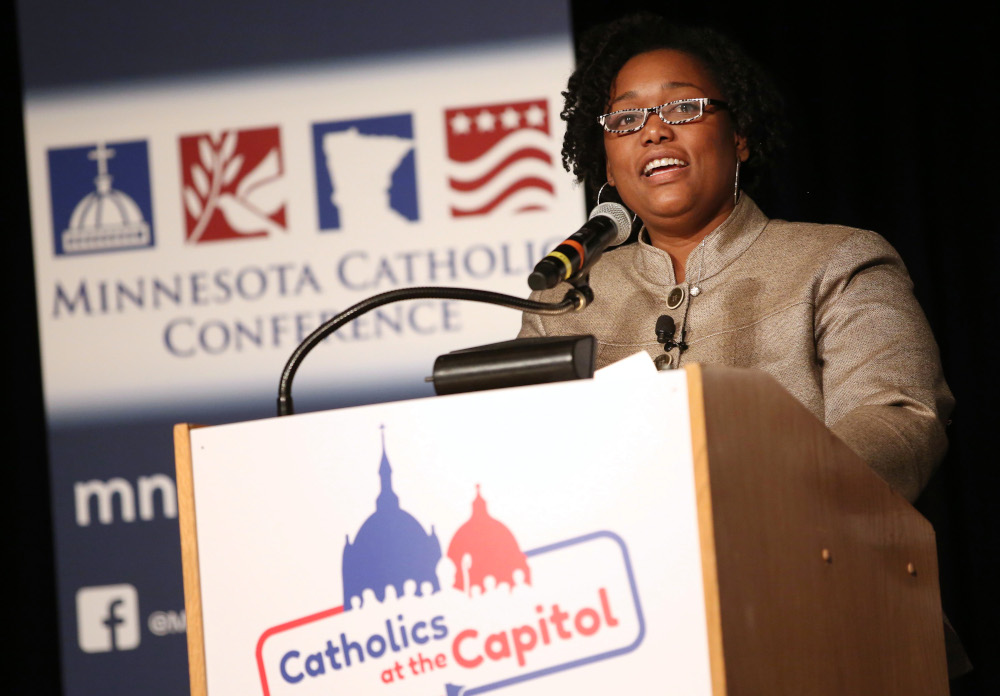 Gloria Purvis, a co-host of "Morning Glory" on EWTN Radio, is seen in this 2017 file photo. (CNS/The Catholic Spirit/Dave Hrbacek)

Never shy about her views, staunch pro-life advocate and radio program host Gloria Purvis considers racism as much a sin as abortion.

Any time an affront to human dignity occurs, whether in the Catholic Church or across broader society, Purvis explained, people of faith are called to confront it.

"Racism is demonic. It's the influence of the evil one to separate the human family," Purvis told Catholic News Service July 21.

Along the way, Purvis knows she has made some people uncomfortable, even angry. She has publicly supported the Black Lives Matter movement and has called for reparations to descendants of enslaved African Americans, which has opened her to significant backlash.

"All I'm doing is explaining the plain truth of our faith," the host of EWTN Radio's "Morning Glory" program said. "That's all I will continue to do as long as the Lord wants me to, as long as it will lead people to conversion and to Christ."

A popular speaker who regularly shares church teaching on life and sexuality, Purvis has garnered a bit more attention in recent weeks as she has addressed racism on the radio program with co-hosts Deacon Harold Burke-Sivers and Msgr. Charles Pope.

Her views have been amplified because of their timing, coming in the aftermath of the Memorial Day death of George Floyd, a Black man who was pinned to the ground under a white Minneapolis police officer's knee for nearly nine minutes. The death has galvanized a nationwide call for racial justice and reform of police departments.

Coincidentally, the Texas-based Guadalupe Radio Network "temporarily" suspended broadcast of "Morning Glory" on its English-language stations, citing a "spirit of contention" among the on-air hosts. It said in a June 26 statement the topic of racism was not part of the decision to suspend the broadcast.

"I still have not heard anything directly from Guadalupe," Purvis said.

She admitted receiving hostile criticism of her views, but pledged to continue to address the injustice of racism, whether on the radio program or in other venues.

The Guadalupe Radio Network did not respond to a request from CNS for comment.

Meanwhile, Purvis finds hope in the current nationwide movement against racism, describing it as different than past efforts that have risen and then swiftly declined. This time, she said, the drive has crossed racial lines and has gained support across communities and even in the corporate world.

"When you had George Floyd happen, it captured everyone's attention. We were quarantined in our homes and didn't have our day-to-day things to distract us. This time whites and Catholics got to see an instance of police brutality and made it more real and concrete perhaps," she said.

Purvis again called for the Catholic Church to set an example to follow in overcoming racism. She has said as much on her radio program and in speaking engagements for years.

She called on lay and clergy leaders in the church to be more vocal in their approach to racism. And while acknowledging the 2018 pastoral letter on racism from the U.S. Conference of Catholic Bishops, "Open Wide Our Hearts: The Enduring Call to Love," she described it simply as "a starting place for people." 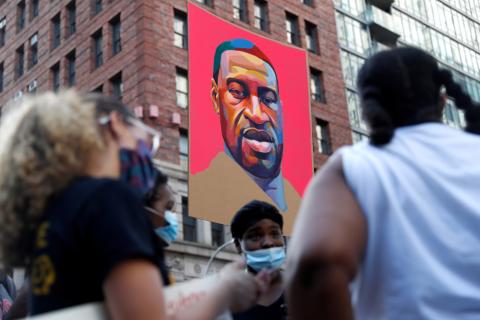 A portrait of George Floyd is seen in New York City during a protest against racial inequality June 8, 2020. (CNS/ Reuters/Shannon Stapleton)

"I really believe white people suffer," Purvis said. "They don't see themselves as victims of racism. But they are. It clouds their capacity to love as God envisions. They can't see the truth of who their Black brothers and sisters are, as children of God."

Abortion and racism are concerns that can unify Catholics in the daily struggle to achieve holiness, she said.

"We have to remember that God desires for us to be holy, and to the degree that we understand that racism is an obstacle to growing holiness we should be asking for his help and the help of the saints to get rid of this evil ... to have a conversion of the heart that is necessary to see and love as Christ loves," Purvis explained.

The work begins by acknowledging that "racism is real," Purvis said. "We also have to look at our church's history in the U.S."

That history includes a time in some parishes when African Americans were relegated to the back pews and were denied holy Communion, Black men were considered unsuitable for the priesthood, and white Catholics were offended by African American women religious in religious habits.

The time has come to confront history and learn from it, Purvis told CNS. She commended Georgetown University's efforts to address its role in supporting slavery. In 2017, following recommendations of a university-wide working group, the school dedicated and renamed two buildings for a person listed on an 1838 bill of sale for slaves and a pioneer African American Catholic educator in the Georgetown community, respectively. The buildings originally had been named for the two Jesuits who arranged the sale of 272 enslaved people.

"Or the idea that liturgy only has to look one way," she said. "I'm not saying don't follow the rubrics, but there are ways to experience the liturgy based on culture."

Anti-racism efforts can embrace art that depicts Jesus and the saints as African Americans see them, Purvis added.

"We have to honestly take a sober look at the ways in which anti-Black and white supremacy has filtered in the way we worship, the way we represent the Holy Family, the way we talk about racism and people," she explained. "It's unfortunate to say the culture has influenced us and we've brought that into the church.

The Charleston, South Carolina, native became Catholic after having at age 12 what she called a "mystical experience" during eucharistic adoration. It has fueled her desire to live out her faith to this day. She has been a leader in the church, working at one time in the Archdiocese of Washington's Office of Black Catholics and in pro-life outreach to the African American community.

She repeated that it's her faith that guides her work to stop racism.

In her outspokenness, Purvis has not been shy about her public support of the peaceful Black Lives Matter demonstrations that surged across the country in the wake of Floyd's death. She has discussed the movement on the radio show and in interviews in recent weeks.

While acknowledging conflicts with church teaching of segments of the Black Lives Matter platform, Purvis said there is no reason not to work with and support the anti-racism organization.

"There's this concrete effort to make Black Lives Matter into a boogie man so that we aren't involved. It's almost treated the (organization) as a greater evil than actual police brutality and the murder of citizens, which to me shows there's something else in effect than that which reflects the hard work of the Gospel," Purvis said.

"In the pro-life movement, we all the time lock arms with people who are considered heretics to the faith," she continued. "When there's a shared goal of trying to protect life in the womb and help mothers in need in difficult pregnancies, we don't have these purity tests in the pro-life movement. But it seems like we do for Black Lives Matter. It's a sign of the evil one to keep people separated."