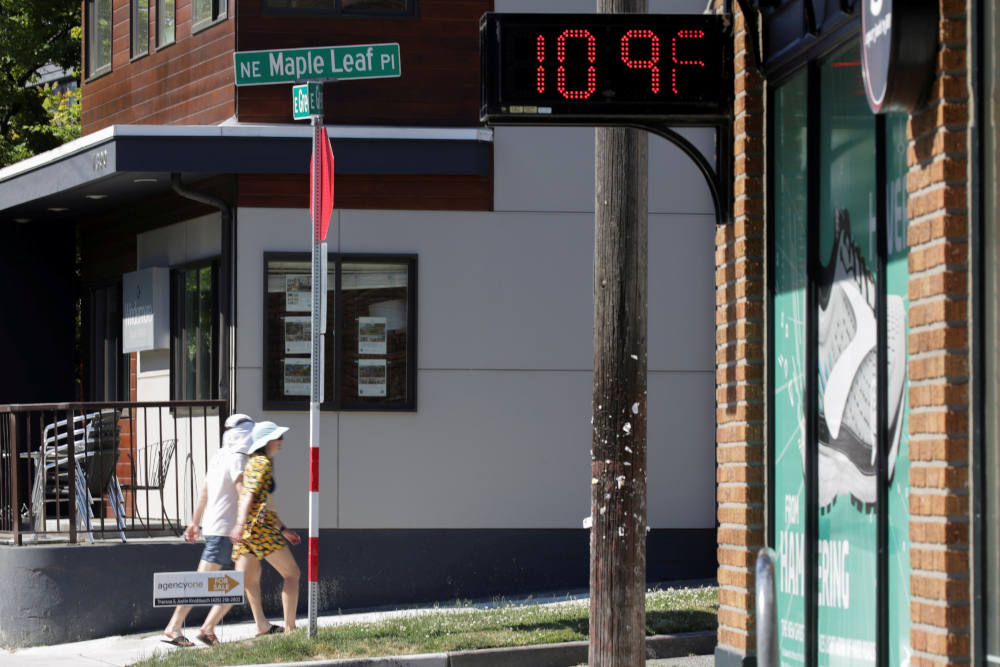 This week, climate change was on many people's minds in the U.S. because of the brutal heat wave that struck the country, especially the Pacific Northwest, where Portland, Oregon, set temperature records on three consecutive days, and Seattle set two in a row.

More than 60 deaths that may have been heat-related were reported in Oregon, along with 10 times that many visits to emergency rooms and urgent-care clinics. In western Canada, there were hundreds more deaths than usual during those few days, leading officials to suspect they were related to the extreme temperatures in the region.

Surveys show that exposure to hot, dry days tends to make people more likely to say that they have experienced the effects of climate change, so the convergence of events in the West, where heat is combining with drought, may lead to greater support for climate legislation.

Coinciding with the heat wave, environmental and Indigenous activists descended on Washington, D.C., chaining themselves to White House gates as they called on President Joe Biden not to weaken his infrastructure proposal that he has been negotiating with Republicans in Congress. Critics fear that the bipartisan agreement that was reached could water down measures aimed at combating climate change.

The heat wave certainly underscores the urgency of legislation aimed at strengthening the country's infrastructure in the face of climate change, as power cables for Portland's rapid transit system melted and electricity use strained power grids. It remains to be seen whether the extreme weather out west will move the needle in Congress, but it may become more and more difficult for skeptical lawmakers to deny the consequences of a warming climate.

This was also a momentous week for EarthBeat, as the National Catholic Reporter Publishing Co. announced that it was divesting of fossil fuel stocks.

NCR environment correspondent Brian Roewe reported on the decision by the NCR board of directors, which unanimously approved adding to the company's investment policy statement — the document that guides financial decisions related to its $12.7 million endowment — both a screen against fossil fuel companies and an endorsement of investments in renewable energies.

Roewe has been reporting for a number of years on the growing divestment movement in the Catholic Church. In some cases, students are pushing their universities to divest. In other cases, religious groups or organizations are making the decision based on faith, and financial, convictions.

Other groups, however, continue to hold just enough shares in fossil fuel companies that they can propose shareholder actions aimed at forcing the companies to be more accountable. In May, activist shareholders gained ground with efforts targeting ExxonMobil and Chevron.

This week, Claire Giangrave at Religion News Service takes a behind-the-scenes look at how faith groups and participants in the Vatican-promoted "Economy of Francesco" project played a key role in those shareholder actions.

Activist shareholders are not the only ones taking aim at fossil fuel companies. There is a growing wave of lawsuits by cities and states around the U.S. that are based on the growing evidence that oil and gas companies have known for decades that the burning of fossil fuels was causing Earth's climate to warm abnormally, but covered up that research.

Chris McGreal at The Guardian provides a good overview of the issue. And Sarah DeWeerdt at The Anthropocene reports on a study that indicates that climate lawsuits could be more successful in linking government or corporate actions to harm from climate change if they made better use of scientific evidence.

In the face of global environmental threats, Jesuit colleges must provide education aimed at creating a more sustainable world, the head of Loyola University Chicago's School of Environmental Sustainability told a recent Society of Jesus conference on justice in higher education. Roewe has the story.

Congolese bishops are encouraging the country's Catholics to commit to protecting the world's second-largest tropical forest from destruction while "taking into account the dignity of the people" who live there, reports Fredrick Nzwili for Catholic News Service.

It seems like this week's heat wave was accompanied by a little deluge of new climate research.

One new study found that up to 410 million people, especially in the tropics, could be at risk from rising sea levels unless global greenhouse gas emissions are sharply reduced, writes Rhi Storer at The Guardian.

Yale Environment 360 reports on research that indicates that the U.S. Environmental Protection Agency may be greatly underestimating emissions of methane — a greenhouse gas even more potent than carbon dioxide — from oil and gas development.

And Greta Moran at Civil Eats describes new calculations of total greenhouse gas emissions from food production, which estimate that putting food on the table — including factors such as packaging, waste and transportation — accounts for as much as one-third of the global carbon footprint.

Elsewhere, Jessica Reznicek, one of two Iowa-based Catholic Workers convicted in 2019 of damaging the Dakota Access Pipeline, was sentenced to eight years in prison, reports Philip Joens of the Des Moines Register. The Associated Press adds Reznicek was ordered to pay nearly $3.2 million in restitution.

After a few months packed with events, especially around Earth Day and Laudato Si' Week, the schedule has slowed down for summer and the July 4 holiday. Looking ahead, though, registration is open now for the Catholic Climate Covenant's biennial conference on "Laudato Si' and the U.S. Church," which will be held virtually July 13-15. You can find more information and a link for registering on the EarthBeat Events page.

Is your organization planning an event? You can add it to our list by clicking here.

From time to time, when we publish a story like the one about the Brooklyn Diocese's solar energy project, readers write to say their parish, diocese, school or religious community is doing something similar. We're working on a map that includes Catholic institutions that are taking action to reduce their carbon footprint.

If you're involved in such a project, we'd like to hear about it. Send us a brief account and a photo as a Small Earth Story, or drop us a line at earthbeat@ncronline.org. We'll share the map when it's a bit more advanced.