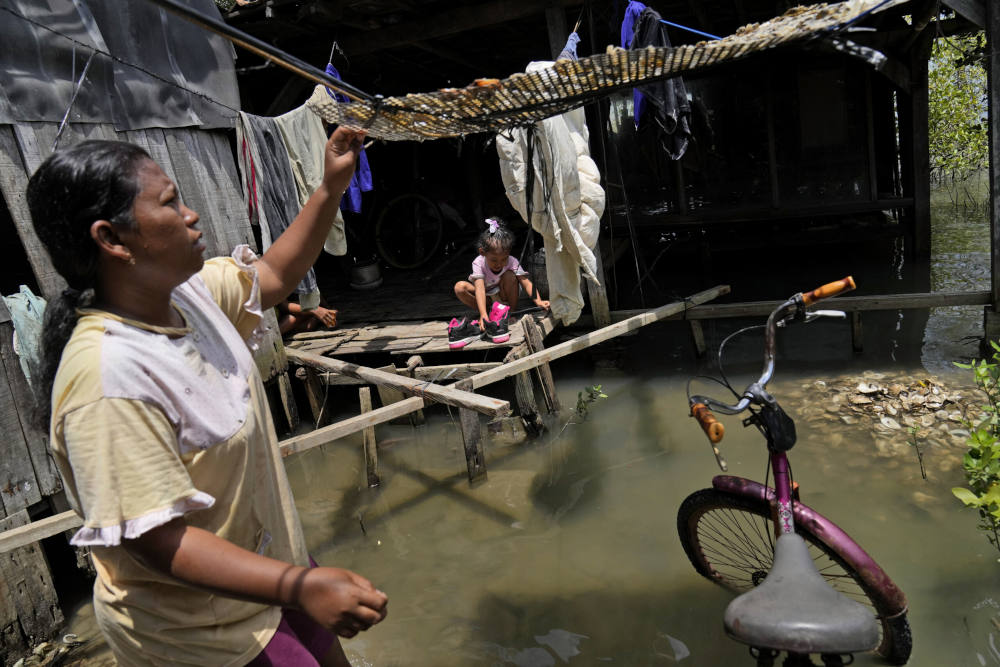 Nia Riningsih, one of few residents who stayed behind after most of her neighbors left due to the rising sea levels that inundated their neighborhood on the northern coast of Java Island, checks salted fish she dries as her daughter Safira plays at their house in Mondoliko village, Central Java, Indonesia, Nov. 7, 2021. (AP Photo/Dita Alangkara)

The National Association of Evangelicals unveiled a sweeping report Monday (Aug. 29) on global climate change, laying out what its authors call the "biblical basis" for environmental activism to help spur fellow evangelicals to address the planetary environmental crisis.

"Creation, although groaning under the fall, is still intended to bless us. However, for too many in this world, the beach isn't about sunscreen and bodysurfing but is a daily reminder of rising tides and failed fishing," reads the introduction of the report, penned by NAE President Walter Kim.

"Instead of a gulp of fresh air from a lush forest, too many children take a deep breath only to gasp with the toxic air that has irritated their lungs."

But the authors admit persuading evangelicals is no small task, considering the religious group has historically been one of the demographics most resistant to action on the issue.

Related: Presbyterians to divest from 5 oil companies after years of debate

The nearly 50-page report, titled "Loving the Least of These: Addressing a Changing Environment," opens with a section that insists protecting the environment is a biblical mandate. 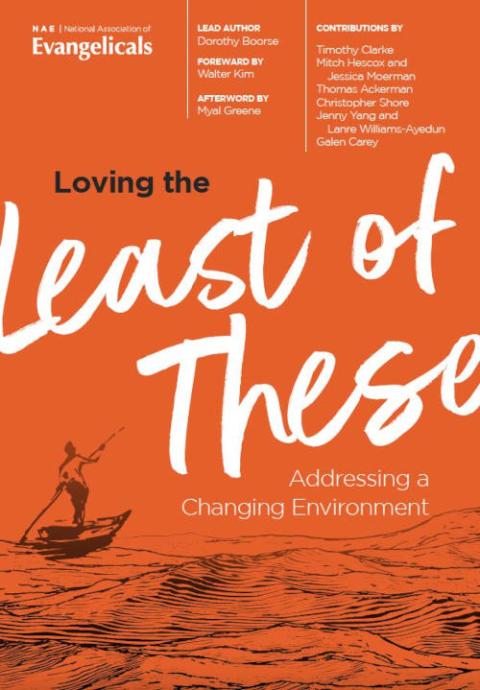 “Loving the Least of These: Addressing a Changing Environment” (RNS photo/Courtesy of NAE)

"The Bible does not tell us anything directly about how to evaluate scientific reports or how to respond to a changing environment, but it does give several helpful principles: Care for creation, love our neighbors and witness to the world," the report reads.

The authors go on to cite passages such as Genesis 2:15 ("God then took the man and settled him in the garden of Eden, to cultivate and care for it"), Matthew 22 ("Love your neighbor as yourself") and Deuteronomy 15 ("Give generously to them and do so without a grudging heart").

"We worship God by caring for creation," the report reads.

Another section outlines the basic science behind climate change, but the report, produced in partnership with the NAE's humanitarian arm World Relief, returns often to the real-world impacts of climate change, such as how air pollution created by fossil fuels can have negative outcomes for children's health or disproportionately affect the poor.

Kim suggested the emphasis on lived experiences, which are often tied to churches or evangelical organizations, is by design.

"One of the things that you'll see in this document is not simply scientific information, though that is there, or biblical argumentation, although that is there, but you also hear stories of actual impact on communities," he told Religion News Service in an interview.

Real-world examples help readers "understand the human dimension of the impact of climate change," he explained.

"I think people of faith responded very deeply, because we're wired to follow in the footsteps of Jesus of loving God and loving our neighbor." 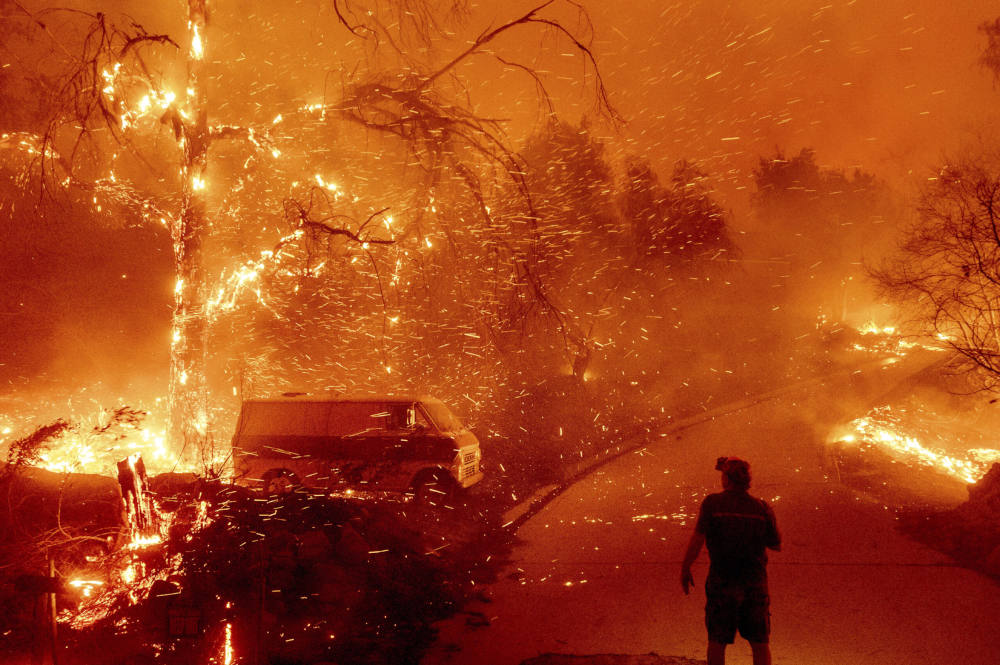 Dorothy Boorse, a biology professor at Gordon College and the chief author of the report, agreed.

"One of the things that can be true for evangelicals is they have a very deep desire to care for others, and they often have a deep spirit of hospitality," she said.

Appealing to concerns about health and care for children, Boorse said, can "spark an imagination" in evangelicals that climate change is "not different from other problems in the world that we feel committed to care about, such as education, food availability or disaster relief."

The focus on persuasion may be the result of necessity. The NAE has spoken out on environmental issues before (the new report functions as an update of a similar document published in 2011), but while mainline Protestant Christian groups and Pope Francis have repeatedly signaled the urgency of addressing climate change, many prominent evangelical leaders have suggested the opposite: Last year, Franklin Graham, son of famed evangelist Billy Graham, dismissed climate change as "nothing new" in a Facebook post and compared it to biblical instances of extreme weather — such as the flood in Genesis or the years of famine and drought in Egypt — that are depicted as acts of God.

The result has often been a religious community resistant to acknowledging the source of the issue, much less acting to prevent it. In a Pew Research survey conducted in January, white evangelicals were the religious group least likely to agree that human activity contributes to climate change, with only 54% saying humanity contributed a great deal or some to the trend. By comparison, 72% of white nonevangelicals, 73% of white Catholics, 81% of Black Protestants and 86% of Hispanic Catholics said so.

But as Boorse points out in the report, there has been some movement since the 2011 report was published, particularly among young evangelicals: A year after that document was unveiled, Young Evangelicals for Climate Action was founded.

"One huge pattern that I observed is that young evangelicals are very concerned about the environment," Boorse, who sits on YECA's advisory board, told RNS. "There's an entrenchment of certain ways of thinking that just takes a long time to change."

Activists say the change can't come soon enough. In addition to ongoing droughts in various parts of the world, the NAE report was unveiled the same day as news broke that, given the current pace of climate change, 3.3% of the Greenland ice sheet — around 110 trillion tons of ice — is slated to melt into the sea, raising global sea levels nearly a foot between now and 2100.

Asked if she was hopeful the report and similar efforts could urge evangelicals to muster their resources and help prevent further environmental calamities, Boorse acknowledged she is often frustrated by fellow faithful who espouse baseless conspiracy theories about climate change or express open hostility to science in general.

"That has been very challenging for me in my professional life," she said. "But I feel God has privileged me with the task of speaking to a group of people that I know and love, and trying, consistently, to talk about this as a real phenomenon — and it needs our attention."

For Boorse, the necessity of the work — and the tenets of her faith — sustain her for the fight ahead.

"I've decided to be hopeful," she said. "I think everybody has to, or you’d never get anything done."