With the planet at 'a breaking point', pope urges decisive action at UN environment summits 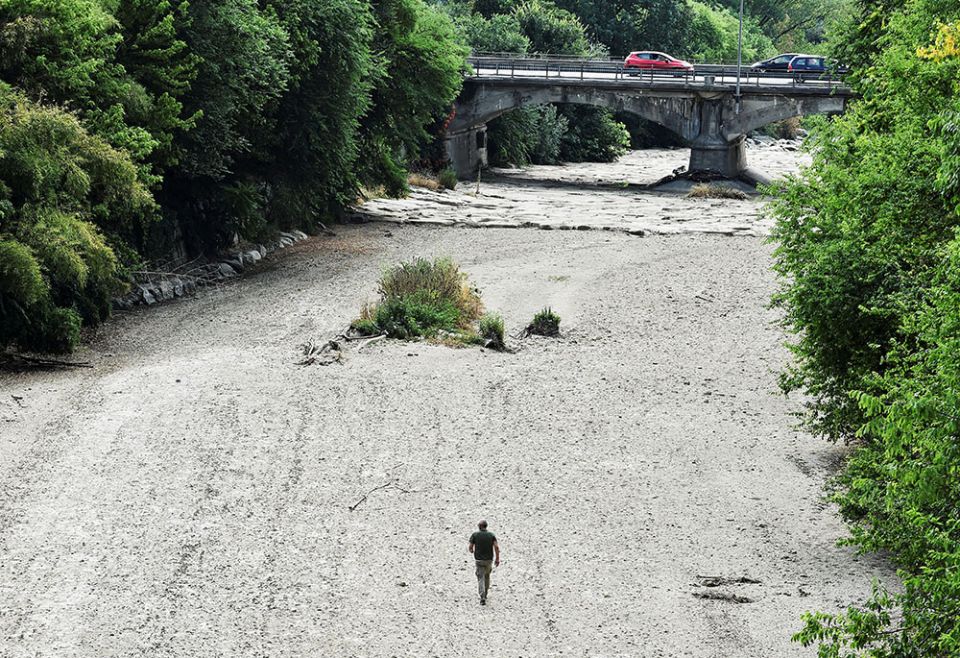 A man walks on the dry riverbed of the Sangone River, a tributary of the Po River, June 19 in Beinasco, Turin, Italy. Italy is experiencing its worst drought in 70 years. Pope Francis issued a message for the World Day of Prayer for the Care of Creation, Sept. 1, calling for "a covenant between human beings and the environment" in order to combat climate change. (CNS/Reuters/Massimo Pinca)

As dangerous heatwaves and wildfires blister the globe this summer, Pope Francis has called for bolder actions from nations at two major international environment summits later this year, and for all people to "repent and modify our lifestyles and destructive systems" in a collective effort to rein in climate change and save ecosystems and people on a planet he said is reaching "a breaking point."

In his message for the upcoming monthlong Season of Creation, the pope proposed that an ecological conversion must occur not only among individuals but within "the community of nations," with particular attention to United Nations conferences focused on addressing climate change and rapid biodiversity loss.

The message was introduced Thursday at a press conference at the Vatican, where Cardinal Michael Czerny, head of the Dicastery for Promoting Integral Human Development, lent support to the proposed Fossil Fuel Non-Proliferation Treaty, which has garnered growing attention as an avenue for nations to bring a rapid end to the age of fossil fuels.

While countries under the Paris Agreement agreed to work to limit average global temperature rise to 1.5 degrees Celsius, the planet has already heated at least 1.1 C since preindustrial times, Czerny said, and "new fossil fuel projects every day accelerate our race towards the precipice. Enough is enough."

"All new exploration and production of coal, oil, and gas must immediately end, and existing production of fossil fuels must be urgently phased out," the cardinal said, adding that such a phase-out be done in a just transition that takes care of impacted workers and communities.

Those three positions form the pillars of the proposed Fossil Fuel Non-Proliferation Treaty, which Czerny said "holds great promise to complement and enhance the Paris Agreement." 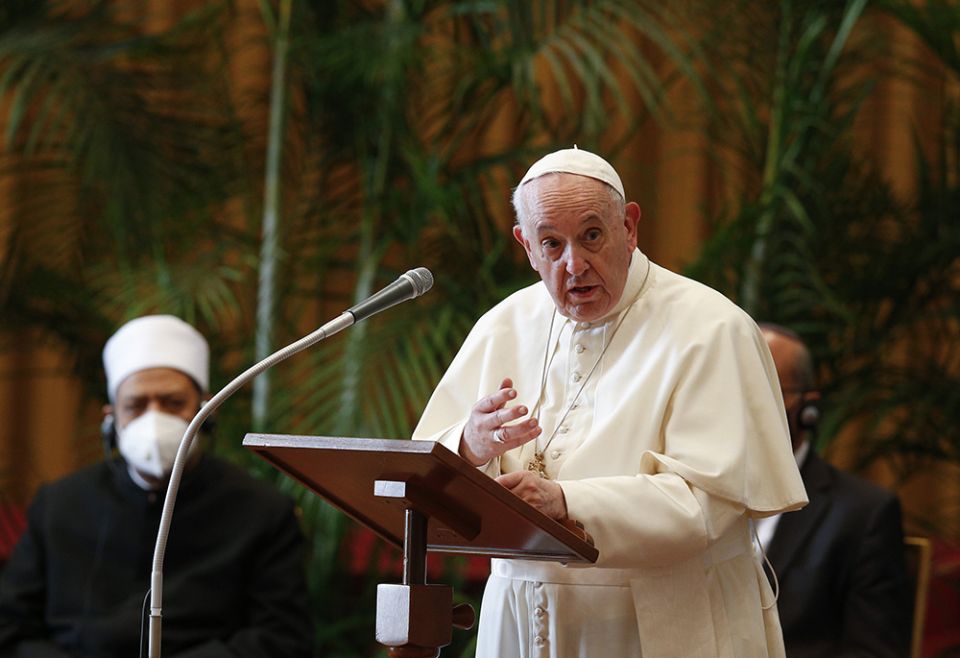 Pope Francis addresses the meeting, "Faith and Science: Towards COP26," with religious leaders in the Hall of Benedictions at the Vatican in this Oct. 4, 2021, file photo. (CNS/Paul Haring)

Advocates of the treaty estimate that coal, oil and gas are responsible for 86% of carbon emissions in the last decade, and say that countries are on pace to use double the amount of fossil fuels that would be allowable to still hold temperature rise to 1.5 C by 2030.

Tzeporah Berman, a Canadian environmental activist and chair of the initiative behind the Fossil Fuel Non-Proliferation Treaty, welcomed the support of a Vatican official, saying in a statement "What is needed now is moral courage. … Expansion of fossil fuel production magnifies the climate crisis but also undermines all of the living systems that are core to our survival."

In his message, Francis called the 1.5 C Paris goal "quite demanding," and said that meeting it requires countries to work together to reach net-zero greenhouse gas emissions "as quickly as possible," including through more ambitious climate plans at COP27, the U.N. climate conference in November. It's expected the Vatican will look to play a larger role in those proceedings after it recently announced it has formally joined the Paris Agreement and the U.N. Framework Convention on Climate Change.

"The present state of decay of our common home merits the same attention as other global challenges such as grave health crises and wars," Francis said.

Solutions to climate change, from changing modes of consumption and production as well as lifestyles, present a "need for a covenant between human beings and the environment," he continued, and repeated a call for extractive industries to end practices that destroy ecosystems, threaten biodiversity and harm communities.

"It is necessary for all of us to act decisively. For we are reaching 'a breaking point,' " the pope said.

The Season of Creation is an annual ecumenical period, first observed by Orthodox Christians and later placed on the Catholic liturgical calendar by Francis, that invites all Christians to pray for God's creation and to work to better care for it. The season begins Sept. 1, the World Day of Prayer for the Care of Creation, and concludes Oct. 4 with the feast day of St. Francis of Assisi, the patron saint of ecology.

"On the one hand, we can hear a sweet song in praise of our beloved Creator," he said, ringing from "a grandiose cosmic choir" composed of countless creatures, and "on the other, an anguished plea, lamenting our mistreatment of this our common home."

The latter chorus, Francis said, is made up of an ensemble of the cries from the earth itself, species facing extinction, people who are economically poor facing the gravest impacts of climate change, Indigenous communities whose ancestral lands have been invaded and destroyed by "predatory economic interests," and young people who "are crying out, anxiously asking us adults to do everything possible to prevent, or at least limit, the collapse of our planet's ecosystems."

"Listening to these anguished cries, we must repent and modify our lifestyles and destructive systems," the pope said.

The pope's message was released while record-breaking temperatures scorched across parts of Europe and North America. Extreme heatwaves, which are becoming longer and more intense due to climate change, have broken out throughout the Northern Hemisphere this summer. On Tuesday (July 19), more than 30 cities in the typically wet, temperate United Kingdom broke the country's record high temperature of 40 C (104 F). Record highs were also set in 60-plus areas in France. In Oklahoma, every weather station in the state Tuesday recorded temperatures of at least 103 F, with some of Oklahoma and Texas reaching 115 F. More than 80% of the U.S. population, or roughly 265 million people, were expected to experience heat advisories this week as temperatures eclipsed 90 F.

Having gotten to 40.2 °C (104.4 °F) is so far removed from what is a normal summer day in the UK that it barely seems possible. pic.twitter.com/zqXyRKLL1G

Along with the extreme heat, wildfires have broken out in many parts of Europe, including France, Turkey, Croatia, Greece, Spain and Portugal, with more than 1,000 deaths on the Iberian Peninsula attributed to the heat and fires.

Francis reiterated that the responsibility to care for creation is an essential part of living a virtuous life for Christians and that all people of faith have a responsibility not only to engage in a personal ecological conversion but also to work and act "in a spirit of maximum cooperation," especially among countries at two U.N. environment conferences in the coming months.

The next international climate change conference, COP27, will take place in Sharm el-Sheikh, Egypt, a resort town on the shores of the Red Sea. There, world leaders are expected to scale up national climate plans and financing in order to cut greenhouse gas emissions in half by 2030. The global community will again gather in December, this time in Montreal, Canada, for the COP15 U.N. Convention on Biological Diversity. That meeting is expected to produce a global pact on conservation and reversing biodiversity loss similar to the Paris Agreement on climate change.

In recent weeks, Catholics groups around the world have expressed concerns around both gatherings, pointing to a lack of progress and raising fears that global attention has turned away from climate change and biodiversity preservation amid the war in Ukraine and soaring inflation and energy costs. 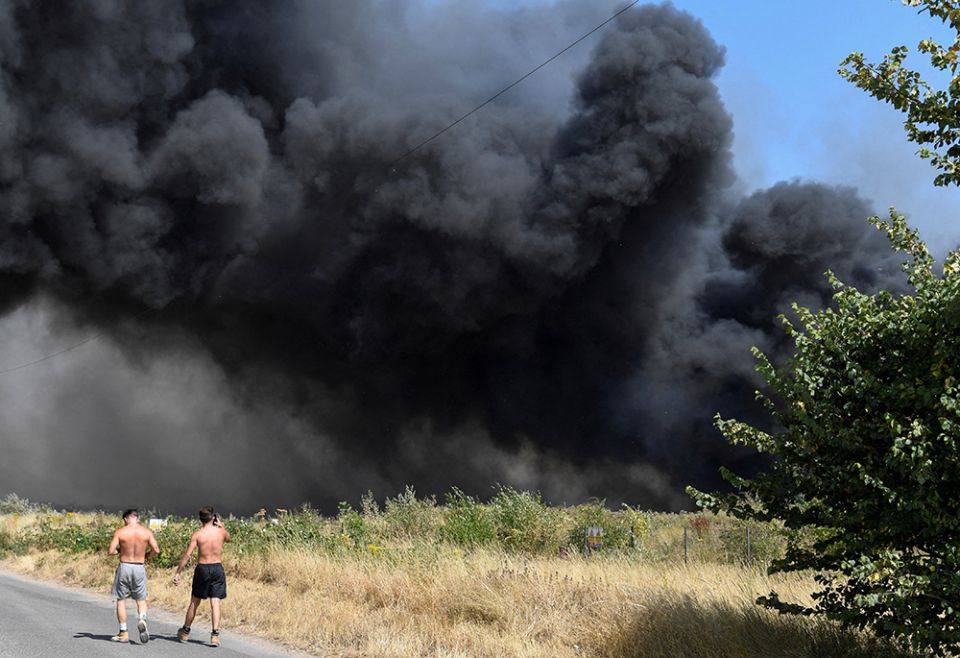 Francis said that his recent move to authorize the Holy See to formally join the Paris Agreement was "in hope that the humanity of the 21th century 'will be remembered for having generously shouldered its grave responsibilities.' "

He said that meeting the 1.5 C Paris goal and reaching net-zero emissions by mid-century begins with more ambitious national climate plans to reduce the heat-trapping gases driving climate change, which countries pledged to bring to COP27 though few have so far announced them.

The pope said that for the world to meet the net-zero emissions goal "means 'converting' models of consumption and production, as well as lifestyles, in a way more respectful of creation" and to practice integral human development that is grounded in responsibility, prudence, solidarity and concern for the poor and future generations. Like Czerny, he stressed the transition away from emissions-producing fossil fuels "cannot neglect the demands of justice, especially for those workers who are most affected by the impact of climate change."

Supporters of the Fossil Fuel Non-Proliferation Treaty, including the Carbon Tracker Initiative, are planning to roll out later this year a first-ever global registry of fossil fuels that would provide an open-source database of global coal, oil and gas production and reserves by country and project.

Mark Campanale, founder of Carbon Tracker Initiative, said that the registry will make countries more accountable for their fossil fuel plans, and added the endorsement of the fossil fuel treaty from Czerny, a top Vatican official, also "makes it even harder for world leaders to ignore the central role of fossil fuels in the climate catastrophe unfolding around us."

As for COP15, the pope outlined four principles for the meeting, beginning with forming a "clear ethical basis" for the measures to preserve biodiversity. He added that a global pact on biodiversity should reverse its decline, support conservation and cooperation, and promote meeting the needs of people in sustainable ways. Francis also encouraged a potential agreement to promote global solidarity, recognizing biodiversity as "a global common good demanding a shared commitment," and to prioritize Indigenous people, the elderly, youth and other vulnerable communities whose livelihoods and cultures are threatened alongside the loss of biodiversity.

Francis went on to repeat a call he made in October 2021 during a meeting of popular movements, pleading, "In the name of God, I ask the great extractive industries — mining, oil, forestry, real estate, agribusiness — to stop destroying forests, wetlands, and mountains, to stop polluting rivers and seas, to stop poisoning food and people."

Within both international environment meetings, the pope said that richer countries must acknowledge the "ecological debt" they've incurred through centuries of polluting and take greater responsibility in producing solutions to climate change and biodiversity loss. That includes honoring past technological and financial promises to less-developed countries — among them, $100 billion annually to assist with climate mitigation and adaptation — and to provide additional financial support for conservation efforts, the pope said. But he added the lack of progress by the world's economic powers does not preclude other countries to justify their own failure to act.

"During this Season of Creation, let us pray that COP27 and COP15 can serve to unite the human family in effectively confronting the double crisis of climate change and the reduction of biodiversity," Francis said.

Recalling St. Paul's call to the Romans to rejoice with those who rejoice and weep with those who weep, the pope concluded the message by saying, "Let us weep with the anguished plea of creation. Let us hear that plea and respond to it with deeds, so that we and future generations can continue to rejoice in creation's sweet song of life and hope."

A version of this story appeared in the Aug 5-18, 2022 print issue under the headline: With the planet at 'a breaking point,' pope urges decisive action .

EarthBeat | With the planet at 'a breaking point', pope urges decisive action at UN environment summits