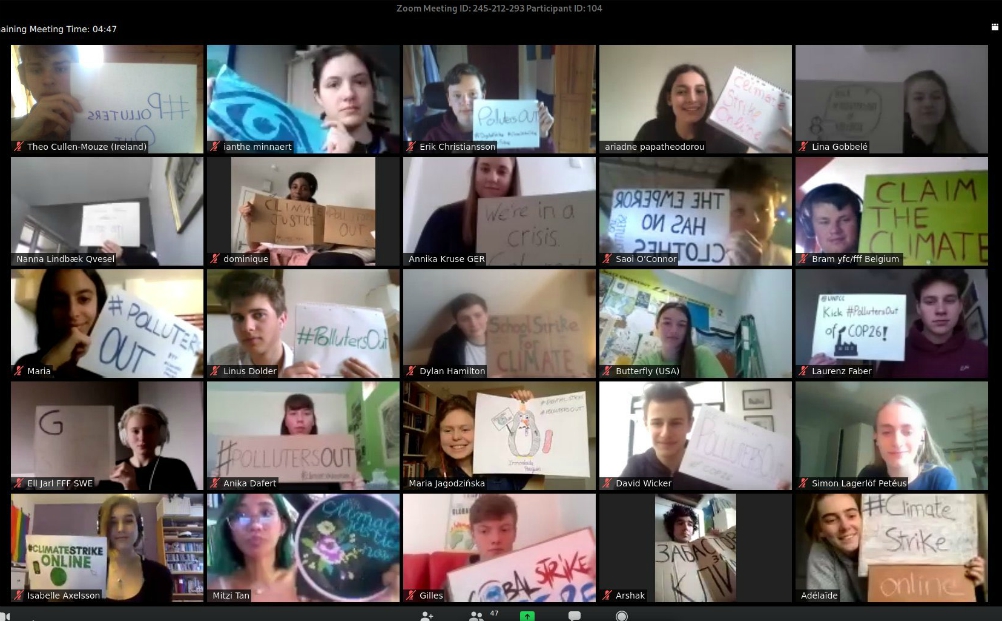 Twenty-five youth activists from across the globe join a digital student climate strike as part of Fridays for Future movement on March 20. (Dylan Hamilton)

Global measures to flatten the curve of the growing coronavirus crisis have led Catholic and other environmental groups to bend their own advocacy approach to avert another worldwide crisis brought by rising global temperatures.

Like so much of society, the environmental movement has had to readjust plans and priorities amid the coronavirus pandemic. That has mainly meant pulling back on public actions and moving online.

Many climate organizations had billed 2020 as pivotal for the global response to climate change. Such milestones as the 50th Earth Day were seen as moments to mobilize major public support for rapid climate action ahead of a critical U.N. climate summit in Glasgow later in November. 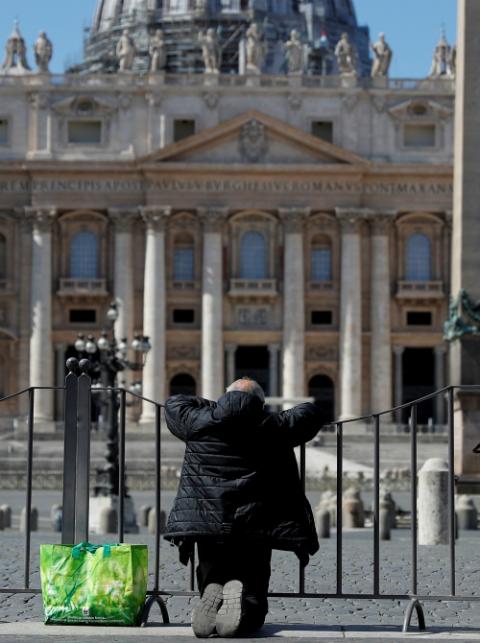 A man prays in front of an empty St. Peter's Square in Rome March 25. (CNS/Reuters/Guglielmo Mangiapane)

For Catholics, the spring also brings the fifth anniversary of Pope Francis' social encyclical on ecology, "Laudato Si', on Care for Our Common Home," with the Vatican sponsoring a weeklong celebration to rally the church to greater steps to care for God's creation.

But the coronavirus in fast fashion has dashed many of those plans, as government orders to limit the virus' spread have confined the movement of as much as one-third of the global population and made public gatherings, a defining characteristic of the grassroots climate movement, a nonstarter for the foreseeable future.

In the United States, the Centers for Disease Control and Prevention has advised against gatherings of more than 50 people through May 10. That timeline has led nearly every Catholic diocese in the U.S. to cancel public celebrations of Holy Week and Easter (April 12). How far beyond that the restrictions remain in place, and alter future climate actions, will likely depend on the success of efforts to stem the spread of the coronavirus.

"The biggest factor is the uncertainty factor." said Dan Misleh, executive director of Catholic Climate Covenant. "How long is this going to go?"

Across the environmental movement, leaders have made clear that, like much of the world, their main concern right now is focused on containing the spread of COVID-19, the disease caused by the novel coronavirus. In a March 18 statement, the Global Catholic Climate Movement offered prayers in solidarity with those affected by the virus and those working to contain it. In addition, it has begun holding Friday prayer services. GreenFaith, a multifaith climate organization, has also held daily virtual prayers.

"While we want to continue to raise the profile of this other crisis, which is climate change," Misleh said, "we want to be respectful of the fact that so much of the world's attention and resources rightfully need to go toward dealing with this very immediate crisis."

Global measures to flatten the pandemic's curve have led Catholic groups to chart a different course to environmental events this spring. Often, it has meant cancellation.

The Economy of Francesco summit in Assisi, Italy — a gathering of young economists to examine economic approaches reflecting the integral ecology the pope described in Laudato Si' — was originally set to begin Thursday but has been pushed back to November. The annual climate conference at Loyola University Chicago was canceled.

In the case of Laudato Si' Week, set for May 16-24, the Vatican has not commented on its status, though partnering organizations around the world have already begun exploring online options. The continuing health crisis in Italy, where more than 7,500 people have died of COVID-19, likewise puts in jeopardy any Rome-based events.

A statement on the Laudato Si' Week website says its team "is discussing ways to adapt activities to the coronavirus. We'll share concrete plans in the coming days. We pray for peace and healing in these challenging times, and that we may continue to rely on the bonds of love between us."

The steering committee of Global Catholic Climate Movement, one of Laudato Si' Week's main organizers, was expected to meet this week to review options in light of the virus. Anna Wagner, the network's director of network engagement, told NCR on March 25 that plans are shifting day by day.

"We do see Laudato Si' Week moving forward, but just in a different way than what was anticipated," Wagner said.

In many cases, that will mean online rather than en masse.

For those confined by the coronavirus, Global Catholic Climate Movement has compiled a list of Laudato Si'-related activities "to use this time for good," such as reading the parts of the encyclical daily, eating plant-based meals, composting and helping neighbors. 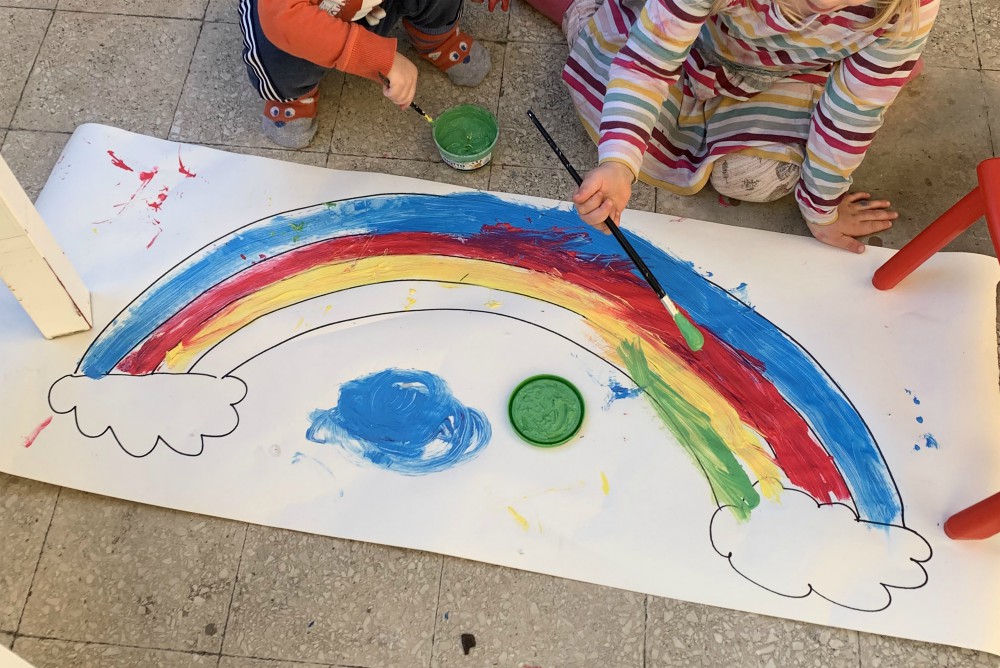 Joanna Kohorst's young children paint a rainbow on a large piece of paper during the lockdown that began March 10 in Rome because of the coronavirus pandemic. Someone also drew on a wall, so the markers are on a special lockdown within the lockdown. (CNS/Joanna Kohorst)

The network of 900-plus Catholic organizations told NCR it has seen a significant boost in people enrolling in its Laudato Si' Animators program. More than 2,200 people signed up for its latest round, offered in Spanish, Portuguese and English, with the latter session starting Monday. Since it began in 2016, it has certified about 1,500 graduates.

St. Pius X Parish in Granger, Indiana, is encouraging homebound families to conduct an energy audit. It also expects to meet virtually with elected representatives. During Laudato Si' Week, the Atlanta Archdiocese plans to provide homily helps to pastors and ask them to make one of their livestreamed Masses a Green Mass focusing on the church teachings on creation care. A number of events planned for Seattle University's Earth Month have also moved to virtual spaces.

The Covenant has revised its annual Earth Day program to gear it toward individuals, families and online groups to better fit the new normal presented by the coronavirus. Interfaith Power & Light has offered kits to make events virtual for its Faith Climate Action Week, planned for April 17-26. An online nationwide prayer on April 22 for action on climate change will proceed.

The youth-led climate strikes have also relocated from city streets to digital avenues. Teen activist Greta Thunberg has urged participants, as the case with her central climate message, to "listen to the scientists" and stay home for now. Earlier this week, the Fridays for Future founder said she and her father were both recovering from mild symptoms of COVID-19.

Grassroots climate groups 350.org and the Sunrise Movement have pressed Congress to address both the needs of working people and climate change in coronavirus recovery legislation. The youth-led Sunrise Movement has also focused on training members along with online teach-ins and virtual voter drives.

Misleh said that Covenant staff are using this "lull" in normal operations to prepare resources for when the pandemic ends. He added that the virus has mostly impacted the Covenant's educational programs, like the one for Earth Day, that were intended for communal settings. The economic repercussions have also made it press pause on small-money grants it was providing to groups for Laudato Si' anniversary actions through its U.S. Catholic Climate Project.

Related: Climate organizers: 2020 is the year to mobilize — with young people in the lead

While some environmental groups have muted their climate messaging amid a viral pandemic, others have drawn connections between the two. A top United Nations official told the Guardian this week that "nature is sending us a message" through the crises presented by the coronavirus and climate change.

"There are too many pressures at the same time on our natural systems and something has to give," said Inger Anderson, head of the U.N. Environment Program. "We are intimately interconnected with nature, whether we like it or not. If we don't take care of nature, we can't take care of ourselves."

Catholic climate organizations that spoke with NCR said they were conscious that for many, climate change is not a top priority in this moment.

"Having a meeting to plan a Laudato Si' Week event doesn't seem to fit the list of things that people will be thinking about right now," said Allen Ottaro, executive director of the Catholic Youth Network for Environmental Sustainability in Africa. Ottaro is a member of NCR's EarthBeat advisory panel.

CYNESA had planned to co-sponsor an interfaith event in Nairobi, Kenya, on biodiversity and conservation in mid-May to kick off Laudato Si' Week. Now the event, in partnership with the U.N. Environment Program, is up in the air, and may too have to move online. 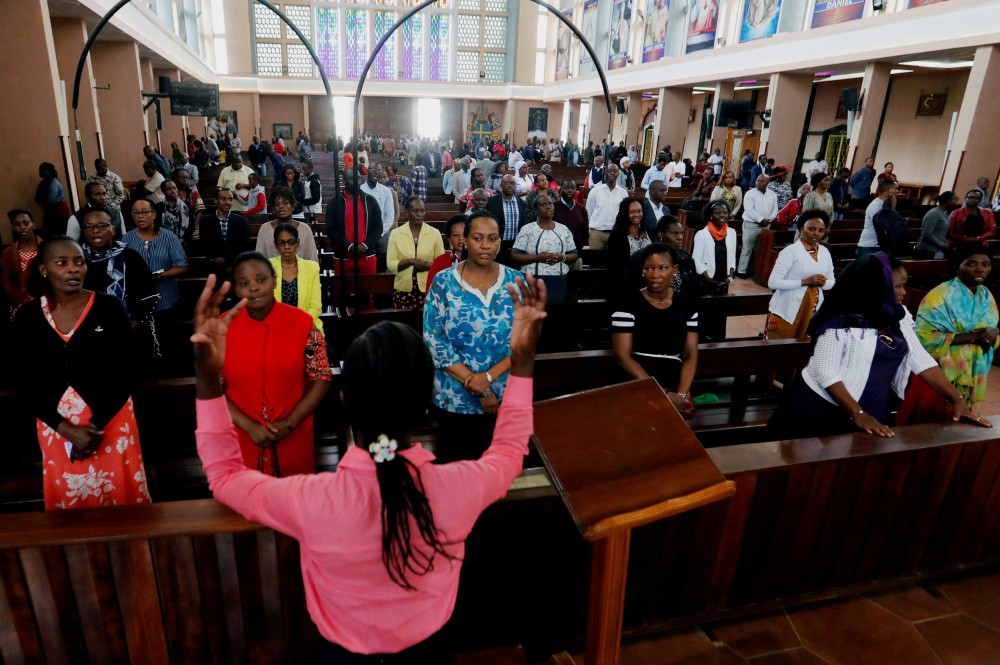 Worshipers pray during a Mass at the Cathedral Basilica of the Holy Family in Nairobi, Kenya, March 22, amid concerns about the spread of the coronavirus disease. (CNS/Reuters/Thomas Mukoya)

In Nairobi, where CYNESA is based, Ottaro said people are gradually realizing the seriousness of the virus. Watching it overwhelm health care systems in places like Italy and Spain have many worried how less-established systems in Africa will respond should the pandemic rise to similar levels there.

Along with Kenya, government advisories limiting movement have been issued in South Africa and Rwanda, two countries where CYNESA has chapters. Like other parts of the world, church buildings have closed. The lockdowns have also pushed their communications mostly online, a challenge, Ottaro said, in parts of Africa where internet connectivity is less reliable or accessible.

Looking ahead, it's unclear what effect the pandemic will have on COP 26, the next U.N. climate conference to be held Nov. 9-20 in Glasgow. The summit, which typically draws tens of thousands of people, is seen as a pivotal in placing the planet on a trajectory to bend another curve: that of global greenhouse emissions, in half within the next decade and to net-zero by 2050.

Countries are expected to arrive at COP 26 with more ambitious climate plans. How governments' responses to the coronavirus will affect climate ambition is uncertain at this point.

Catholic environmental leaders said the response has shown how quickly governments can mobilize massive resources and how people can change lifestyles in response to a crisis. Now the challenge is to apply those to the slower-moving crisis of climate change, beginning with taking the warnings from the science seriously.

Ottaro, a participant in past COPs, said the pandemic situation will challenge nongovernmental organizations and civil society groups to press governments not to return to old ways in the economy and society but instead adopt an integral approach that would protect ecology and limit the destruction from a future pandemic.

"I hope that something will change, something fundamental will change in the way people live that will also have an impact, a positive impact on our common home," he said. "It will be sad if we went back to business as usual."

This story appears in the Coronavirus feature series. View the full series.
A version of this story appeared in the April 17-30, 2020 print issue under the headline: Climate activists shift from streets to screen.