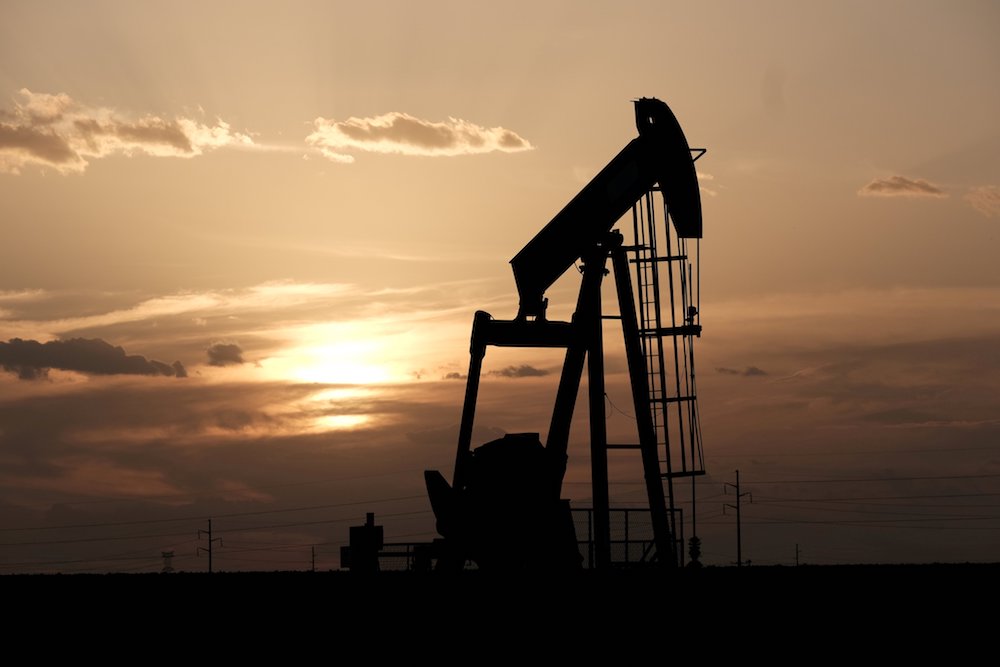 Creighton University announced it plans to phase out all investments in fossil fuels from its $587 million endowment within the next 10 years and target new investments in sustainable energy.

Under the new investment policy, Creighton will sell off public securities of fossil fuel companies within five years and end holdings in private fossil fuel investments within 10 years. At the same time, it plans to seek out new investments in renewable energy and energy efficiency.

The decision, approved by the trustees in September and announced on New Year's Eve, comes more than two years after students on the Jesuit campus in Omaha, Nebraska, began pressuring school leadership to divest from companies involved in the extraction and refining of coal, oil and natural gas because of their leading role in human-driven climate change. The move makes Creighton the fourth U.S. Catholic university to make public its plans to divest fully from fossil fuels.

"This modified policy signifies our strong commitment to sustainable investing — and sustainability in general across the University," Jesuit Fr. Daniel Hendrickson, the university's president, said in a statement sent to the university community Dec. 31. He added that the school's investment advisers have assured Creighton that fossil fuel divestment "can be accomplished without a negative impact on the strength and overall performance of our endowment, which greatly serves the mission of the institution."

Hendrickson said the new investment policy aligns with the university's increasing emphasis on sustainability, which the school has given greater attention following Pope Francis' 2015 encyclical "Laudato Si', on Care for Our Common Home" and the Society of Jesus' adoption of caring for our common home as one of four central priorities for the next decade.

In an email to EarthBeat, Hendrickson called the policy a "win-win situation," and said it developed out of a review of investment guidelines he requested of the board of trustees in fall 2019.

In its announcement of the decision, Creighton pointed directly to a Vatican document released in June on implementing Laudato Si', which recommended that Catholic institutions invest in sustainability and establish ethical investment principles that "promote responsible investments in social and environmental sectors, for example by evaluating progressive disinvestment from the fossil-fuel sector." The university statement called that "the first time the Vatican has explicitly endorsed fossil fuel divestment."

Since April 2018, students at Creighton have wielded economic arguments and Jesuit and Catholic principles in a campaign to persuade Hendrickson and the board of trustees to divest. Students said the step was critical for addressing climate change, which is primarily driven by burning fossil fuels, and limiting the threats that accompany rising temperatures, such as increased droughts, flooding and destructive storms.

Emily Burke, a senior at Creighton and one of the leaders in its climate movement, told EarthBeat that "students are surely celebrating today."

"This has been two years in the making, and we are so proud that we pushed Creighton to this kind of action so soon," Burke, president of the GreenJays student club, said.

"It's very rewarding to be a Creighton student after an announcement like this," she added.

Michael Galeski, another student climate leader at Creighton, wrote in a Medium post that the decision "was the result of over 2 years of persistence by the Creighton student body."

"This is a win not only for the climate and Creighton’s endowment, but for the future of sustainable and responsible capitalism," Galeski wrote. "People are voting with their dollars, and the companies that refuse to adapt their business models to a carbon constrained society are losing badly."

Hendrickson, along with the board, faculty and staff, expressed gratitude for the role Creighton's students' played in the process.

"I am proud that our students are engaged in important issues affecting our world and want to lend their voices and talents to make a difference," he told EarthBeat. 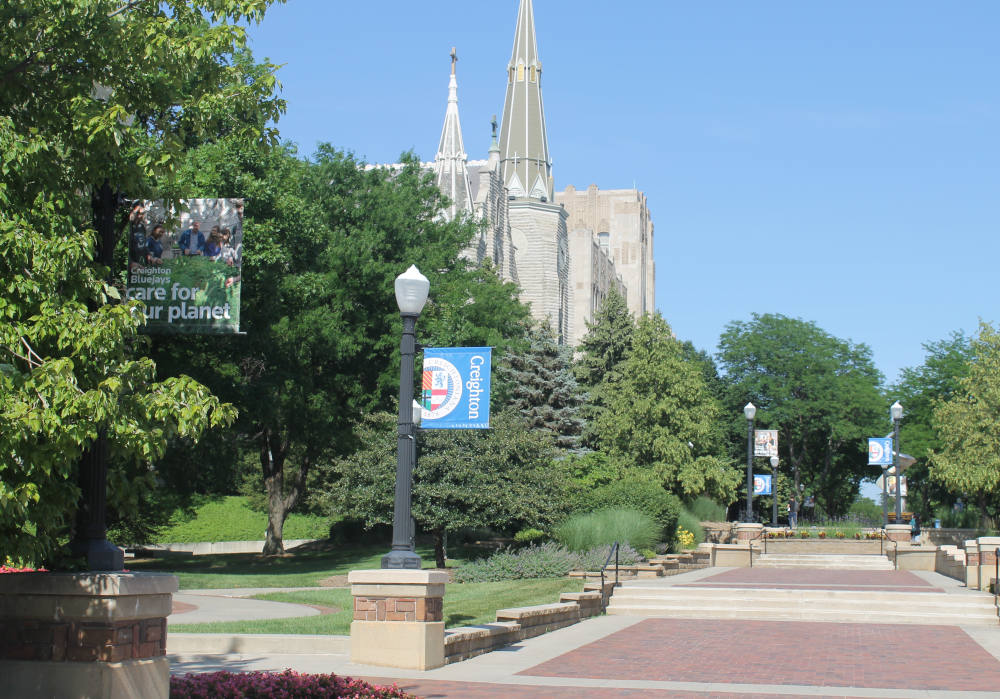 Jesuit-run Creighton University, in Omaha, Nebraska, announced Dec. 31 that it will end investments in fossil fuel companies within the next 10 years. (NCR photo/Brian Roewe)

The full divestment policy at Creighton came in stages.

In November 2019, students held a non-binding referendum in which 86% of those voting asked the university to divest by 2025 from the 200 coal, oil and gas companies holding fossil fuel reserves with the highest emission potential, and to divest fully from fossil fuels by 2050.

Days later, Hendrickson declined to enact a total divestment policy "at this time," citing concerns that it "could negatively impact Creighton and its students." As part of a number of alternate initiatives, he asked for a review of the university's investment guidelines.

The board of trustees' investment subcommittee in February approved a partial divestment plan that would reduce from 8.9% to 5.7% the endowment's holdings in companies that profit from fossil fuels but don't own fuel reserves. Creighton said those investments had been cut to 3.9% by June.

Students at the time called the step good news, but criticized it for not addressing stocks in the largest fossil fuel companies or offering a timeline for full divestment. Students also questioned the ties of some board members to the fossil fuel industry, as well as donations the school received from the Charles Koch Foundation. The Koch family has been a major backer of climate change denial campaigns and rollbacks of fossil fuel regulations.

"Without the protesting and the meetings and the legislation that we wrote and passed and voted on as students, I don't think that this would have happened now," Burke said of the newest divestment announcement.

She added that students were "really, really pleased" that the 10-year time frame will bring full divestment more quickly than called for in their proposal. Looking ahead, students in the Creighton climate movement plan to turn their attention to holding the university to achieving its goal of carbon neutrality goal by 2050 and pressing for mandatory climate change education for all students.

Richard Miller, a theologian at Creighton who teaches courses on climate change, said the full divestment step is "very important, but it's just the beginning."

"It's changing the discussion. It draws a moral line. The real pressure needs to be put on federal leaders," he told EarthBeat, adding that universities are well placed to encourage politicians to act on climate change.

Creighton said that as it divests it will continue to vote in support of shareholder resolutions aimed at reducing carbon dioxide emissions and work with corporate responsibility groups like the Interfaith Center on Corporate Responsibility and the Jesuit Committee on Investment Responsibility.

In the statement announcing the decision, board of trustees chair Michael McCarthy said the modified policy "accords with Creighton's Jesuit, Catholic mission, and the strategic management of Creighton's investment funds," which finance student scholarships, academic programs and university operations.

The university also has hosted a number of forums and programs related to sustainability, and later this year it will join the Catholic Climate Covenant in co-hosting a second conference — this one virtual, because of the coronavirus pandemic — on implementing Laudato Si' in the U.S. church.

Besides Creighton, three other Catholic schools in the U.S. — the University of Dayton, Seattle University and Georgetown University — have publicly committed to divesting their endowments of fossil fuels. In December, alumni of Boston College asked the Massachusetts attorney general to investigate the school's investments in fossil fuels, arguing that continuing to hold such stocks went against the college's fiduciary responsibilities and its mission as a Jesuit and Catholic school.

The Catholic Divestment Network, a coalition of student-led fossil fuel divestment campaigns at Catholic universities, issued a statement by email congratulating Creighton "on taking this important step toward more fully living out Laudato Si' " and urging administrators of other Catholic schools who sit on Creighton's board to take the step on their own campuses.

Overall, more than 220 Catholic institutions have stated they will remove such investments from financial portfolios or avoid them in the future. Faith-based organizations make up one-third of the 1,300-plus organizations worldwide that have pledged to divest from upwards of $14 trillion in fossil fuel holdings.

Read this next: How the University of Dayton divested from fossil fuels — and what happened to its bottom line
A version of this story appeared in the Jan 22-Feb 4, 2021 print issue under the headline: Creighton University to divest fully from fossil fuels within 10 years.