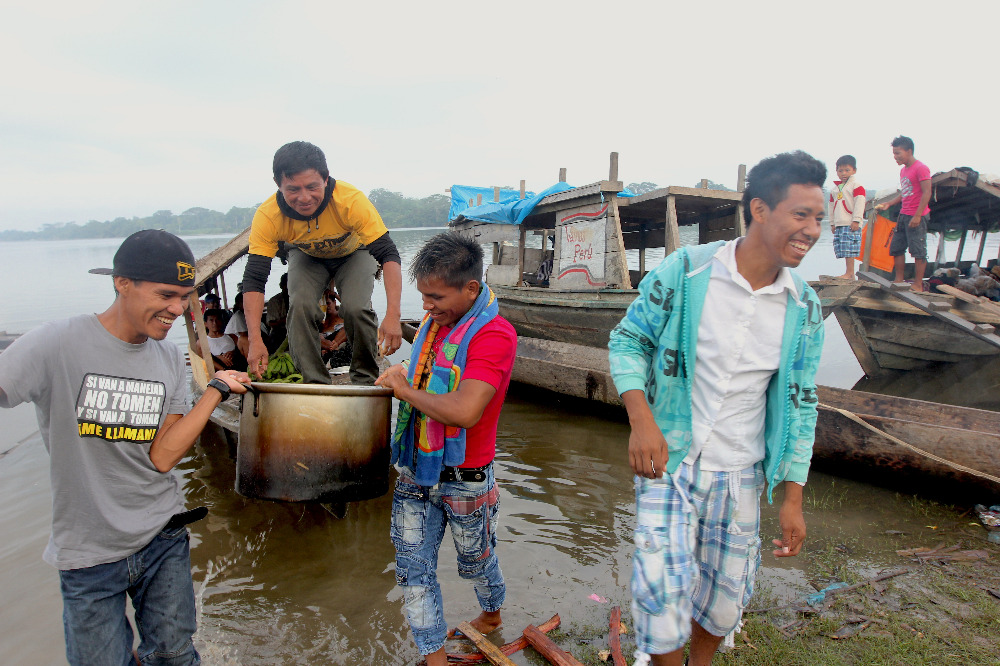 Men in a community on the Marañón River in Peru's Amazon region unload a pot of water they have drawn from the middle of the lake, the community's main water source. (Photo by Barbara Fraser)

I had no running water in my apartment last week. Not a drop. That's what can happen when you live in a building in Lima, Peru, that has 50-year-old plumbing, especially when the pipes have sprung leaks during the coronavirus pandemic and the building's blueprints have somehow disappeared. The result was a major overhaul of the water and sewer pipes, which meant turning off water to the apartments while the plumbers located and replaced the pipes.

Fortunately, the spigot in the basement still worked, so buckets saved the day. But it was a small reminder, during this Season of Creation, of how hard many people around the world — especially women and children — have to work just to have water for drinking, cooking, washing and bathing.

Heating a kettle for a bucket bath took me back to my earliest years here, when if you were lucky, water came through the city system to your neighborhood for a few hours every day. If you were really lucky, your house had a storage tank on the roof that would give you running water most of the day. Otherwise, you filled buckets and barrels during those hours and rationed your water use.

A drought in 1992 complicated things even more. Most of Peru's electricity at the time came from a hydroelectric dam on the Mantaro River, high in the Andes Mountains. A drought meant less water in both the Mantaro River and the Rímac River, the extremely polluted source of drinking water for this megacity. So not only did we have days without water service, with no warning of cutoffs, but we also had rolling blackouts. Companies bought generators; the rest of us used candles.

That year rearranged my priorities: I discovered that food, shelter and running water are crucial for a healthy life. Electricity is really nice. And everything else is optional. I remembered that lesson when the plumbers turned off the water in my apartment building and began replacing the pipes. Hauling buckets from the basement was a nuisance, but at least I had water.

Billions of people around the world are not so lucky. Lima is a city of 30 million in the middle of a desert — the second-largest desert city in the world, after Cairo, Egypt. In the mid-1990s, I would sometimes accompany a priest friend on Sunday mornings when he went to celebrate Mass at a children's home on the north side of the city, a good hour's drive away. The route took us past an "invasion" — a vast, sandy plain where migrants to the city, or children of migrants looking for a place of their own, had built shelters made of straw mats (no rain here — for better or worse) to stake a claim. 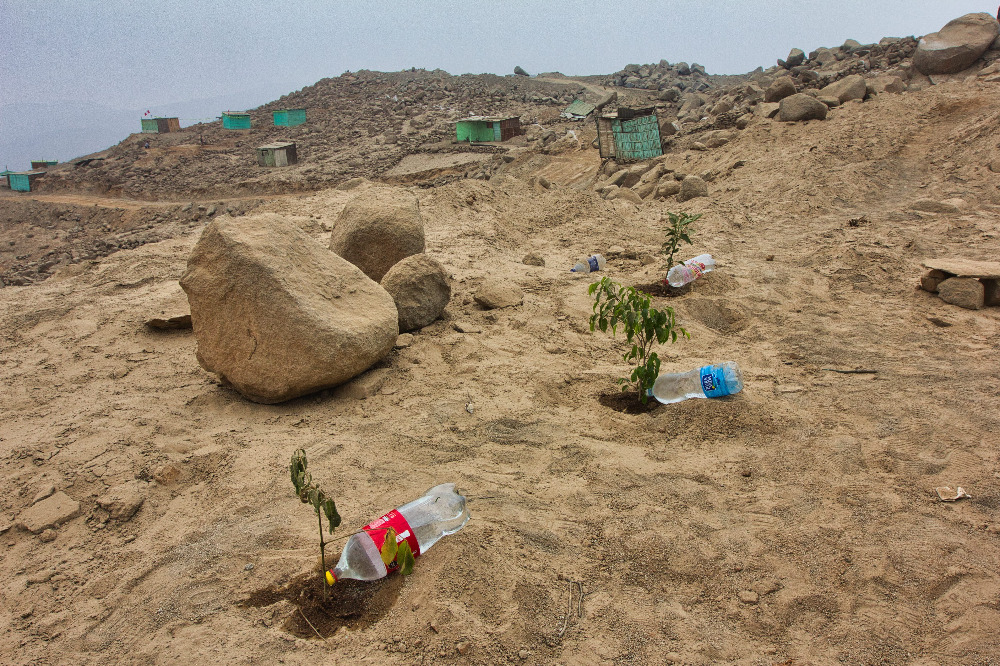 Bottles serve as a makeshift irrigation system for plants in a new settlement of houses on a barren hillside in Lima, Peru. (Photo by Barbara Fraser)

In cities and rural areas worldwide, the lives of many women and children revolve around fetching water. About 2.2 billion people — more than one-quarter of the world's population — do not have safe water piped to their homes, according to the World Health Organization, and 3 billion lack basic facilities for washing their hands. And that's in the middle of a health crisis in which handwashing is a key preventive measure.

If those figures conjure images of rural Africa or Amazonia, that's certainly accurate — but the problem exists in the United States, too, often out of the mainstream eye until something like the Flint, Michigan, water crisis, which exposed thousands of children to toxic lead, hits the headlines. Flint is far from the only case. "More than 30 million Americans lived in areas where water systems violated safety rules at the beginning of last year, according to data from the Environmental Protection Agency," Justin Worland wrote in Time in February 2020.

As with most environmental hazards, the lack of safe water affects people of color the most. Environmental racism is a fundamental environmental injustice. People who live in polluted neighborhoods are more vulnerable to disease, including COVID-19. Governments' failure to provide clean water is a violation of international agreements that water is a human right. And it is a manifestation of ecological sin — "pollution and destruction of the harmony of the environment" with impacts that will ripple through future generations.

During this Season of Creation, let's give some thought to water — to our use and abuse of it, and to the fact that corporations have convinced us that their bottled water is safer (even though more than half of all bottled water comes from the tap), leading to mountains of plastic waste that often ends up in the oceans or exported to low-income countries. What steps can we and our faith communities take, beginning this month, to help provide safe water to those who need it?

"The disintegration of biodiversity, spiraling climate disasters and unjust impact of the current pandemic on the poor and vulnerable: all these are a wake-up call in the face of our rampant greed and consumption."

And from Pope Francis, an environmental video message:

"We are squeezing out the planet's goods. Squeezing them out, as if the earth were an orange" and creating an "ecological debt," Pope Francis says in a bilingual video message (in his native Spanish, with English subtitles) for the Season of Creation. "Who is going to pay this debt? … Today — not tomorrow, today — we have to care for Creation responsibly."

"Monks have geological patience," a Benedictine friend in a monastery on the shore of Lake Titicaca in Peru told me years ago. You can get an idea of how long that is by taking a look at this animated, interactive ancient Earth globe, which shows how the planet's surface and its climate have changed over 750 million years as continents have merged and drifted apart. The place where you live now was somewhere else entirely when the first coral reefs were forming in the oceans. Want to imagine your backyard as Jurassic Park? Take this deep Earth history globe for a spin.

If you like EarthBeat Weekly, why not share it with a friend? Feel free to forward this newsletter or pass along the link to EarthBeat Weekly on our website. And if you're reading this issue of EarthBeat Weekly in your browser and would like to receive it in your inbox, you can sign up for here for weekly delivery.

As always, if you find EarthBeat reporting worthwhile, we urge you to consider supporting our work by becoming a member of NCR Forward for as little as $5 per month. EarthBeat will sponsor two special events for NCR Forward members during September to mark the Season of Creation.