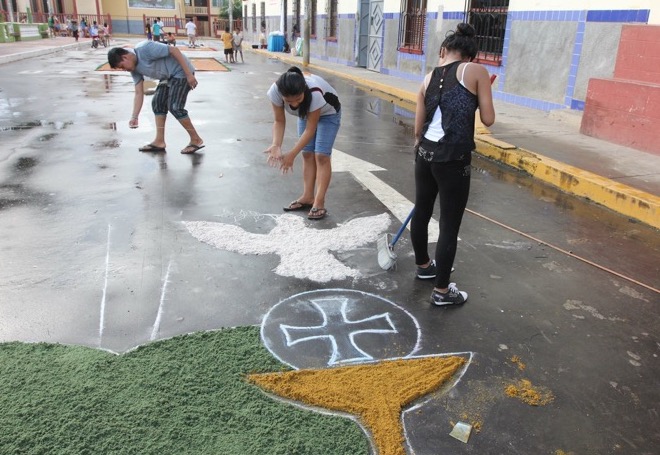 Young people in the Peruvian town of Nauta prepare street paintings made of colored sawdust in preparation for Holy Week processions. (Barbara Fraser)

Holy Week always reminds me of how radically electricity — something most of us take for granted — can alter people's lives, and why making it clean and affordable is so vital.

When I lived in Peru's Andean highlands nearly three decades ago, the town of Chucuito, on the shore of Lake Titicaca, was known for its elaborate Holy Week processions, which commemorated the Passion of Christ. On Holy Thursday evening, the statue of Mary, Mother of Sorrows, dressed in black, would be carried around one side of the town, while the statue of Jesus would be carried around the other.

They would depart from a small chapel in the lower part of town and meet in the plaza in front of the old colonial church uphill, recreating the meeting of Jesus and his mother on the way to the place of crucifixion. A procession that filled the streets would follow each statue, with people playing wind instruments and drums and singing hymns.

One year in the early 1990s, women were up early on Holy Thursday morning, fetching huge armloads of flowers. They gathered outdoors to adorn the platform that would carry Mary, painstakingly attaching the blossoms along with hundreds of candles.

In the evening, everyone gathered in the chapel to pray before the procession. The candles on the platform bearing the image of Mary were lit one by one. Just a few months earlier, Chucuito had been connected to Peru's power grid, and the platform bearing the image of Christ was lit not by candles, but by four incandescent bulbs plugged into an outlet in the chapel wall.

Men hoisted the platform carrying Mary onto their shoulders and stepped out into the darkness, the candlelight gently illuminating the face of the Sorrowful Mother. Then someone pulled the plug, and the statue of Jesus went dark. There was whispering around me. Would the darkened statue lead the procession? 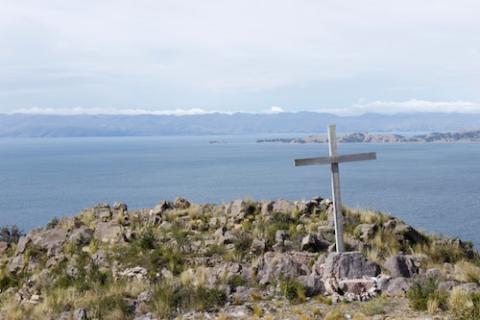 Outside the chapel, a man waited with a portable generator in a wheelbarrow. He fired up the machine, someone plugged in the lights and the procession continued, with the musicians doing their best to drown out the rumble of the motor.

At the time, only two-thirds of Peru's households had electricity. Now the figure is 97%. The same is true in most of Latin America and Asia, although rural residents are most likely to lack electricity or to have it for only a few hours a day.

Globally, however, inequities remain. Of the estimated 770 million people in the world who lack electricity, 75% live in Africa. And experts say the COVID-19 pandemic has stalled nearly a decade of steady growth in access.

That's a reminder of how closely intertwined energy, health and equity are. While governments have been closing the gap, demand for energy continues to increase, and electricity generation still depends heavily on fossil fuels.

The seventh Sustainable Development Goal calls for clean, affordable energy for all by 2030, a target likely to remain elusive without a sharp shift in investment and subsidies from fossil fuels to renewable sources. This year — with President Joe Biden's international climate conference on Earth Day, April 22, and the U.N. climate summit, COP 26, in Glasgow, Scotland, in November — will show how serious countries are about taking action.

What we've heard from readers this week:

My story this week about the need for both individual conversion and systemic change in efforts to stop global warming drew several reactions.

Sam Mitchell pointed out that the study cited in the story showed "CLEARLY that the single biggest personal lifestyle choice a person can make — BY FAR — is to CHOOSE to have one fewer child." That is true, and it should have been mentioned in the story. The study found that in industrialized countries, having one fewer child has about 20 times the emission-reduction impact as giving up the car, which is the next most significant individual choice.

Besides personal lifestyle changes, the story spoke of the need for people to advocate for climate-friendly public policies, but reader Nikki VanDerGrinten said that is not enough.

Advocacy, she wrote, "should be in conjunction with voting for climate-focused representatives. The third action, promoted by [climate scientist] Katherine Hayhoe, is talking about climate risks with friends and groups on a regular basis. Finally, I would suggest considering divesting from fossil fuels. I agree that taxing the fossil fuel companies is necessary."

She adds: "Have you heard of the Energy Innovation & Carbon Dividend  Act (HR763)? Please do explore all that it proposes, including a dividend that would be equally distributed to every household on a monthly basis. This approach would incentivize [research and development] of alternative energy while providing $$ for the poor to counterbalance the rise in utility bills." A more detailed explanation of the bipartisan bill, which has drawn support from the U.S. bishops, can be found here.

We welcome your thoughts about the stories published on EarthBeat. You can write us at earthbeat@ncronline.org.

Interfaith Power & Light will mark 20 years of a religious response to global warming with a virtual celebration April 7 at 5 p.m. Pacific Time. The event will include music, stories, and a message from Bishop Michael Curry, presiding bishop of the Episcopal Church.

The coronavirus pandemic is an ongoing reminder of the inequities that persist between and within countries, and of how dependent we are on healthy ecosystems for survival. In the same way, may Easter remind us of the role we must play in restoring our broken world.

We at EarthBeat wish you and those you love a blessed Triduum and a joyful Easter.