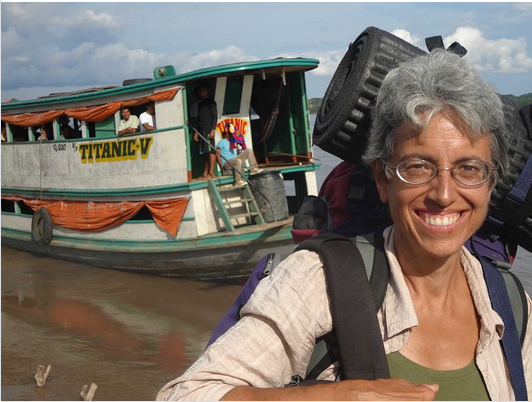 Barbara Fraser on the Marañón River in Peru, where she traveled on the river boat, Titanic V, during a visit to Kukama indigenous communities in July 2014

It's been a big news week for EarthBeat, with major boosts to both our financial and human resources.

As you can read in our lead story on the EarthBeat homepage today, the Franciscan Sisters of Perpetual Adoration (FSPA) have given NCR $1.5 million to help endow our environmental coverage. We also have a new editor! Barbara Fraser, an award-winning environmental reporter based in Peru, starts Monday as NCR's new climate editor.

I welcome the chance to write about both of these developments before stepping into a new role as NCR publisher on Monday.

You don't have to be Catholic to know how important religious women are to the church and, for that matter, the world. Just click through the stories on our sister site, Global Sisters Report, for daily evidence of both. Anyone deeply involved in the environmental movement has also come to appreciate leadership by sisters in the fight against climate change. It's not a new phenomenon, as this 2013 article from The Atlantic makes clear.

So, too, have the FSPA sisters been working on behalf of the earth for a very long time. They've led initiatives involving energy consumption, climate action, water quality and life on land and life under water. And they were among a dozen congregations of women religious providing the foundational funding for EarthBeat.

NCR is deeply grateful for their generous support of our work.

Barbara Fraser, who takes over as editor of EarthBeat on Monday, traces her passion for the environment to adolescent years when she learned most of the songs on Pete Seeger's "God Bless the Grass" album by heart. Other favorites: John Prine's "Paradise" and Joni Mitchell's "Paved Paradise and Put up a Parking Lot." She also recalls the influence of such books as "Silent Spring" by Rachel Carson and "Laying Waste" by Michael Brown.

A year after graduating from the University of Dayton with a communications/journalism degree, she took a reporting job at The Dominion Post in Morgantown, West Virginia.

"Appalachia was another world -- natural beauty, poverty of a sort I had never seen, and companies that stripped the land of its mineral wealth leaving nothing in return," she recalled. "I moved to Applachia four years after the region's bishops wrote their poetic and prophetic pastoral letter, 'This Land is Home to Me.' My parish in Morgantown was the first place where I consistently and constantly heard the Gospel connected with social justice."

Although I lived there for just six years, that time in Appalachia has echoed through the rest of my life. When I arrived in Peru and visited communities in the Andes, it reminded me of Appalachia: natural beauty and economic poverty, mineral wealth owned by outsiders who despoiled the land and gave little or nothing back, children who left as soon as they could because they saw no future in the land their parents farmed. In 2014, an accidental meeting with two Spanish Augustinian missionaries in the Peruvian Amazon opened up another world to me, where indigeous people have lived for decades amid waste from oil operations. Wading through oily water with indigenous women who fear the fish aren't safe to eat, I'm reminded of what the Appalachian bishops tried to tell us nearly half a century ago: a preferential option for the poor is also a preferential option for the Earth.

Fluent in Spanish and conversant in Portuguese, Barbara will continue to be based in Lima. It's in many ways an ideal location for this position, with the intensity of the climate crisis in the global south likely foreshadowing what awaits the rest of the world.

One of Barbara's Facebook friends captured Barbara's move to NCR quite aptly in a comment attached to her post about her new job:  "Felicitaciones! Un match perfecto para ti y NCR."

The next installment of the World Council of Churches webinar series, "Churches on the Road to an Economy of Life and Ecological Justice," will happen at 8 a.m. EDT Aug. 4, focused on "Confessing for just and sustainable consumption." The webinar is free and you can register here.

You can add your event to the EarthBeat Event Calendar -- virtual or otherwise -- here. It's free.

As the Franciscan sisters made clear with their $1.5 million gift, they expect EarthBeat to function as a catalyst for action on behalf of creation. So it was heartening to hear this week from Robert Burnett, a parishioner at Sts. Ninian and Triduana in Endburgh, Scotland.

Robert is part of a Laudato Si' reflection group at the parish, which is using our "Digging into Laudato Si'" series as a resource for their discussions. The group had a question for series author Samantha Panchèvre, but I also took the occasion to ask Robert about his parish, which is registered as an Eco Congregation and where 60 percent of parishioners have signed the Laudato Si' Pledge. Robert told me:

We have continued to seek new ways of developing as an eco-congregation and this year for the fifth anniversary of Laudato Si we decided to return to studying the treasure chest it contains anew and found the "Digging into Laudato Si'" material an excellent resource... On a personal level, I feel very strongly that it is essential that the vision of Laudato Si' is incorporated into our regular Sunday liturgies.

And speaking of human resources, we bid farewell today to EarthBeat staff writer Jesse Remedios, who won the prestigious Martin Luther King, Jr. Fellowship at Boston University, where he will pursue graduate studies in journalism. We see Jesse's new adventures not so much as a departure -- more a launch of an extemely eco-savvy journalist into a world that needs what he brings.

And on a personal note, since this is the final EarthBeat Weekly I'll write before starting my new job at NCR, thank you so much for reading -- and for your support. Let's keep in touch.